Polymeric micelles based on amphiphilic polysaccharides have some advantages as a carrier of poorly soluble lipophilic drugs thanks to their characteristic "core–shell" structure. Previously, ionic polymeric micelles based on chitosan and fatty acids have been developed. The aim of the present study was the preparation and characterization of hyaluronic acid (HA) derivatives by direct ionic interaction between the HA carboxylic groups and the amine groups of dodecyl amine (DDA) and hexadecyl amine (HDA). The HA–HDA polymeric micelles were loaded with a poorly soluble hydrophobic antifungal drug, clotrimazole (CLO). A 23 full factorial experimental design was used to evaluate the effect of the following factors: HA/HDA ratio from 1:0.25 to 1:0.75, cholesterol (CHOL%) as percentage of HA from 10% to 30%, and preparation temperature from 20 to 40 °C. As dependent variables (responses), nanoparticle dimensions and clotrimazole concentration in the final colloidal dispersion were considered. To optimize the drug final concentration, the design was therefore expanded into a rotatable central composite design (CCD). The effects of the formulation variables and the composition of the optimized formulation were confirmed by a mixture design. Physicochemical characterization of the optimized formulation was performed, confirming the ionic interaction between the polysaccharide and the HDA. View Full-Text
Keywords: hyaluronic acid; ionic polymeric micelles; design of experiments; hexadecyl amine; antifungal drugs; clotrimazole hyaluronic acid; ionic polymeric micelles; design of experiments; hexadecyl amine; antifungal drugs; clotrimazole
►▼ Show Figures 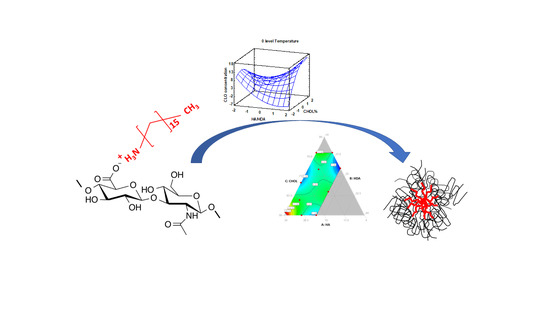