Acyclovir (ACV) is one of the most used antiviral drugs for the treatment of herpes simplex virus infections and other relevant mucosal infections caused by viruses. Nevertheless, the low water solubility of ACV limits both its bioavailability and antiviral performance. The combination of block copolymer micelles and cyclodextrins (CDs) may result in polypseudorotaxanes with tunable drug solubilizing and gelling properties. However, the simultaneous addition of various CDs has barely been investigated yet. The aim of this work was to design and characterize ternary combinations of Pluronic® F127 (PF127), αCD and βCD in terms of polypseudorotaxane formation, rheological behavior, and ACV solubilization ability and controlled release. The formation of polypseudorotaxanes between PF127 and the CDs was confirmed by FT-IR spectroscopy, X-ray diffraction, and NMR spectroscopy. The effects of αCD/βCD concentration range (0–7% w/w) on copolymer (6.5% w/w) gel features were evaluated at 20 and 37 °C by rheological studies, resulting in changes of the copolymer gelling properties. PF127 with αCD/βCD improved the solubilization of ACV, maintaining the biocompatibility (hen’s egg test on the chorio-allantoic membrane). In addition, the gels were able to sustain acyclovir delivery. The formulation prepared with similar proportions of αCD and βCD provided a slower and more constant release. The results obtained suggest that the combination of Pluronic with αCD/βCD mixtures can be a valuable approach to tune the rheological features and drug release profiles from these supramolecular gels. View Full-Text
Keywords: Pluronic® F127; cyclodextrins mixture; acyclovir; polypseudorotaxanes; solubilization; controlled release Pluronic® F127; cyclodextrins mixture; acyclovir; polypseudorotaxanes; solubilization; controlled release
►▼ Show Figures 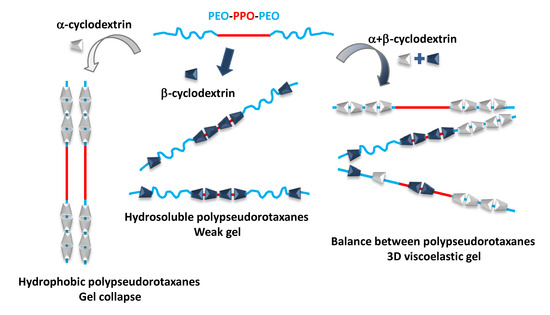