Taxol, a formulation of paclitaxel (PTX), is one of the most widely used anticancer drugs, particularly for treating recurring ovarian carcinomas following surgery. Clinically, PTX is used in combination with other drugs such as lapatinib (LAP) to increase treatment efficacy. Delivering drug combinations with nanoparticles has the potential to improve chemotherapy outcomes. In this study, we use Flash NanoPrecipitation, a rapid, scalable process to encapsulate weakly hydrophobic drugs (logP < 6) PTX and LAP into polymer nanoparticles with a coordination complex of tannic acid and iron formed during the mixing process. We determine the formulation parameters required to achieve uniform nanoparticles and evaluate the drug release in vitro. The size of the resulting nanoparticles was stable at pH 7.4, facilitating sustained drug release via first-order Fickian diffusion. Encapsulating either PTX or LAP into nanoparticles increases drug potency (as indicated by the decrease in IC-50 concentration); we observe a 1500-fold increase in PTX potency and a six-fold increase in LAP potency. When PTX and LAP are co-loaded in the same nanoparticle, they have a synergistic effect that is greater than treating with two single-drug-loaded nanoparticles as the combination index is 0.23 compared to 0.40, respectively. View Full-Text
Keywords: Flash NanoPrecipitation; polymer nanoparticle; codelivery; combination therapy; drug synergy; ovarian cancer; nanomedicine Flash NanoPrecipitation; polymer nanoparticle; codelivery; combination therapy; drug synergy; ovarian cancer; nanomedicine
►▼ Show Figures 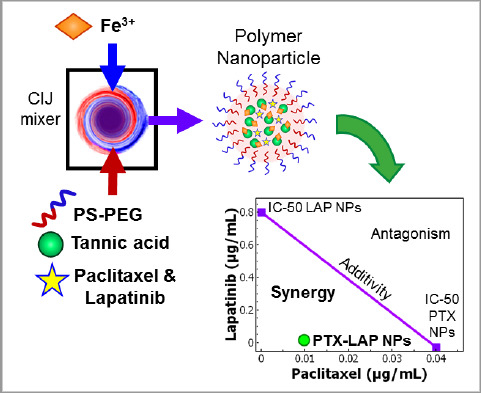