:
CdSe/CdS core-shell quantum rods (QRs) are a promising prospect in optoelectronic applications but usually have a relatively low quantum efficiency and stability. Here, we report on an efficient and stable CdSe/CdS/ZnS QRs-in-matrix assembly (QRAs) by growing and embedding CdSe/CdS QRs in ZnS matrices. Structural characterizations show that the CdSe/CdS QRs are encapsulated and interconnected by ZnS in the QRAs structure. The stable ZnS encapsulation renders the CdSe/CdS QRs high quantum efficiency (QE) up to 85%. The QRAs also present high photo- and thermal-stability and can preserve 93% of the initial QE at 100 °C. The QRAs powder presents a light degradation of only 2% under continuous excitation for 100 h, displaying profound potential in optoelectronic applications. White light-emitting diodes (WLEDs) are fabricated by packaging the QRAs powder as phosphor on top of blue GaN chip. The WLED shows high optical performance and light quality.
Keywords:
quantum rod; core-shell; assembly; light-emitting diodes; stability

CdSe/CdS dot-in-rod nanocrystals integrate the 0D confined quantum dots (QDs) within 1D quantum rods [1,2,3,4]. This heterostructure endows the CdSe/CdS quantum rods (QRs) with a larger Stokes shift, intense polarized emission, faster radiative decay, and intrinsic charge separation [5,6,7,8]. These unique optical and electrical features make CdSe/CdS QRs promising for optoelectronic applications such as light-harvesting [7], biosensing [4], visible lighting communication [9,10,11], and light-emitting diodes (LEDs) [12,13]. Conventional CdSe/CdS QDs present a large overlap between the absorption and emission spectra that induces strong concentration quenching of QDs and a thermal issue in optoelectronic devices [14,15,16,17,18]. For CdSe/CdS QRs, the CdS rod acts as an efficient absorber for light below 470 nm, and the generated excitons in CdS can transfer to the quantum confined CdSe core and promote emission at longer wavelengths [19,20]. This characteristic is important for lighting and display applications in which the mixed green and red emitting QDs and QRs are excited by blue LEDs [21,22,23]. Because of the significant extinction coefficient, the large volume of CdS strongly increases the blue absorbance and reduces the demand for the concentration of the emissive CdSe core [24,25]. As a result, concentration quenching is effectively inhibited.
In previous decades, considerable progress has been made in the synthesis and optical study of CdSe/CdS QRs [1,2,3,4,5,6,7,8,9]. However, the practical application of CdSe/CdS and CdSe/CdS/ZnS QRs is still limited because of their relatively low quantum efficiency (QE) and stability compared to the “giant” spherical CdSe/CdS/ZnS QDs [26,27]. This issue is mainly attributed to the surface defects on CdS, which trap the electrons and induce non-radiative recombination [28,29,30]. The spherical CdSe/CdS QDs usually possess a cubic structure, and the CdS surface can be passivated by overgrowing a thick ZnS shell [31,32]. However, the CdS rods have a hexagonal structure, and the lattice mismatch between hexagonal CdS and ZnS is rather large, so it is unfavorable to grow a thick ZnS shell on CdS QRs [33,34]. Although the efficiency of CdSe/CdS QRs has been improved by passivation of the surface with organic ligands and thin ZnS encapsulation, the thermal- and photo-stability of the CdSe/CdS/ZnS QRs remains unsatisfactory [35,36,37].
In this article, we report on the efficiency and stability enhancement of the CdSe/CdS QRs by forming a CdSe/CdS/ZnS QRs-in-matrix assembly (QRAs) structure. The QRAs were synthesized by growing ZnS on CdSe/CdS QRs at a low ligand concentration. The ZnS particles crosslink the CdSe/CdS QRs and fabricate a matrix involving the QRs and ZnS crosslinker. Steady-state and real-time photoluminescence characterizations were employed to investigate the optical properties of the QRAs under different conditions. White-light LEDs (WLEDs) based on QRAs were further fabricated to verify the high performance of the QRAs in practical optoelectronic applications.

2.3. Fabrication of WLEDs with QRs and QRAs

The experiment used a typical 2835 lead frame LED (2.8 mm × 3.5 mm × 0.65 mm) package. The experiment was carried out by mixing LuAG:Ce phosphor and CdSe/CdS/ZnS QRAs or CdSe/CdS QRs powder into silicone resin. Then, the mixture was deposited on top of the GaN LED chip in the LED frame through fluid dispensing. The fabricated LEDs were kept at 100 °C for 2 h and 150 °C for 2 h in air to cure the phosphor–silicone composite. The LEDs were soldered on PCB by a standard reflow soldering process to carry out the optical and stability tests.

CdSe/CdS QRs were synthesized by referring to the literature [37]. As mentioned above, the ZnS has a large lattice mismatch with hexagonal CdS. Hence, it usually forms a thin-layer encapsulation on the QR surface. According to literature reports, when there are plenty of ligands in a solution, overgrowth of thick ZnS will drive the destruction of the ZnS shelling on isolated CdSe/CdS QRs [33,34]. The ligands help to maintain the monodispersion of the QRs in solution; however, they are also involved into the resolve-growth of the surface during ZnS shelling and accelerate the surface reconstruction. With this understanding, we reduced the ligand concentration in the growth of ZnS on the surface of CdSe/CdS QRs, and Zn(DDTC)2 was employed as a single source ZnS precursor. The growth led to the formation of the assembly structure of CdSe/CdS QRs with ZnS encapsulation and interconnection.
Figure 1 shows the TEM images of the CdSe QDs core, CdSe/CdS QRs, and the CdSe/CdS/ZnS QRAs. The CdSe QDs present a quasi-spherical shape with a mean diameter of 3.1 nm. Figure 1b displays homogenously dispersed CdSe/CdS QRs with an average length of 55 nm and width of 4.7 nm, respectively. Figure 1c,d present the charts of the size distribution for the CdSe QDs and the CdSe/CdS QRs, which were measured from the TEM images. After the growth of ZnS, the CdSe/CdS QRs became closely packed and connected with each other to form an assembly structure, as shown in Figure 1e. The CdSe/CdS QRs in the assembly present a slightly increased mean diameter of 5.1 nm, suggesting the growth of the ZnS layer on the surface.
The high resolution TEM (HRTEM) image of selected areas in Figure 2a shows the existence of ZnS between CdSe/CdS QRs (Figure 2a–c). Some of the ZnS particles are marked with the yellow frame in Figure 2b. This shows that the CdS QRs are interconnected by randomly distributed ZnS particles, forming a matrix rather than a simple assembly. Figure 2c shows the ZnS growth around the CdSe/CdS QRs. Instead of growing into a uniform thick shell, the ZnS on the CdS surface grow with an irregular shape and act as a bridge to crosslink CdSe/CdS QRs. The QRs in the QRAs also show a more irregular surface compared to the pristine QRs, suggesting a slight reconstruction of the surface. The surface reconstruction could help to release the lattice stress and stabilize the ZnS growing on the surface. Figure 2d displays the HAADF-STEM element characterization of the selected line in the image. The result shows the high Zn proportion between CdS QRs, proving the growth of ZnS within the QRs. The result meets the observations shown in Figure 2c.
Based on the structure characterization, we suspect the reaction procedure occurs as illustrated in Figure 3. Zn(DTTC)2 slowly decomposes and firstly grows into a monolayer of ZnS on the surface of CdS QRs. With the continuous growth of ZnS, the CdS surface becomes unstable because of increased lattice stress, leading to slight surface reconstruction. During the process, some of the ZnS grows into large ZnS islands on the surface. Meanwhile, the highly concentrated CdSe/CdS tends to agglomerate due to the lack of surface ligands. Since the QRs are close to each other, the ZnS can contact the nearby QRs and finally form a ZnS particle bridge to connect the QRs. The interconnected QRs help to release the lattice stress, further inducing the continuous growth of ZnS into the QRAs structure.

The QRs and QRAs were washed and dried into powder for the photostability test and the fabrication of LEDs. The dried QRAs powder displays a brick-red color under room light and bright red fluorescence under 365 nm UV light irradiation (Figure 7a). The dry powers of QRAs and QRs (about 50 mg) were collected and compressed into a thin film with a size of about 2 mm × 2 mm on a 1 cm × 1 cm alumina ceramic plate. The alumina plate was placed on a hotplate and the QRAs were excited by 440 nm laser irradiation at 0.1 W/mm2 to test the long-term photostability of the QRAs in air. As shown in Figure 7b, the QRAs became photochemically stable after an initial photoluminescence enhancement stage for approximately 20 h and presented slight fluorescent quenching for only 2% after continuous excitation for 100 h. In comparison, the QRs presented fast degradation, and the fluorescence intensity dropped to 50% after continuous excitation for less than 30 h. The results indicate the highly improved antioxidization property of the QRAs compared with that of the QRs.
To further explore the optical characteristics of QRAs in practical applications, WLEDs were developed by using red emitting QRAs. Silica gel employing red-emitting QRAs and green-emitting LuAG:Ce was deposited and cured on top of a blue GaN chip to fabricate WLEDs. Figure 8a illustrates the LED structure and the fabricated WLED, and the electroluminescent (EL) spectrum of a WLED sample is shown in Figure 8b. The WLED with QRAs presents a luminous efficiency of 92.1 mL/W under 27 mW of driving power. The WLED has a high color rendering index (CRI) of 91.3 and a color coordinate at (0.3194, 0.3452), lying near the blackbody curve of the day light with a color temperature of 5000, as shown in Figure 8c. The curves in Figure 8d display the integrated red, green, and blue intensities of the WLEDs driven from 27 to 450 mW. The typical driving power for a medium power WLED is 350 mW. As shown in Figure 8d, the integrated light intensities of the three colors could maintain an approximately linear correlation to the operating power at up to 300 mW. Only when the power exceeds 350 mW, the red-light curve starts to show a clear downgrade trend, and the WLED presents a slight shift of the color coordinates toward blue. When the driving power is 477.4 mW, the color coordinate is (0.3048, 0.3303), as illustrated in Figure 8c. Therefore, the QRAs can meet the critical requirement for LEDs with on-chip type packaging. The test results reveal the high performance and promising potential of the QRAs in optoelectronic applications.

In summary, a facile synthetic approach has been developed for the growth of a CdSe/CdS/ZnS QRs-in-matrix structure. This method not only enables stable ZnS to be grown on the surface of CdSe/CdS QRs but also promotes the assembly of CdSe/CdS QRs with ZnS crosslinking. The unique QRAs structure provides thick ZnS encapsulation that effectively confines the excitons in the QRs and improves the antioxidization ability of the QRs. As a result, the QRAs present a high quantum efficiency up to 85%, thermal quenching of only 7% at 100 °C, and highly enhanced long-term photochemical stability. The stable ZnS encapsulation gives the QRAs high performance in practical LED applications. Moreover, the method has high potential to be applied to enhance optical performance and stability of the other non-spherical nanoparticles. 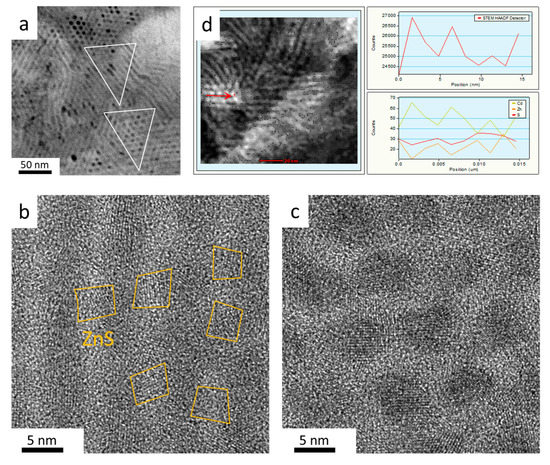 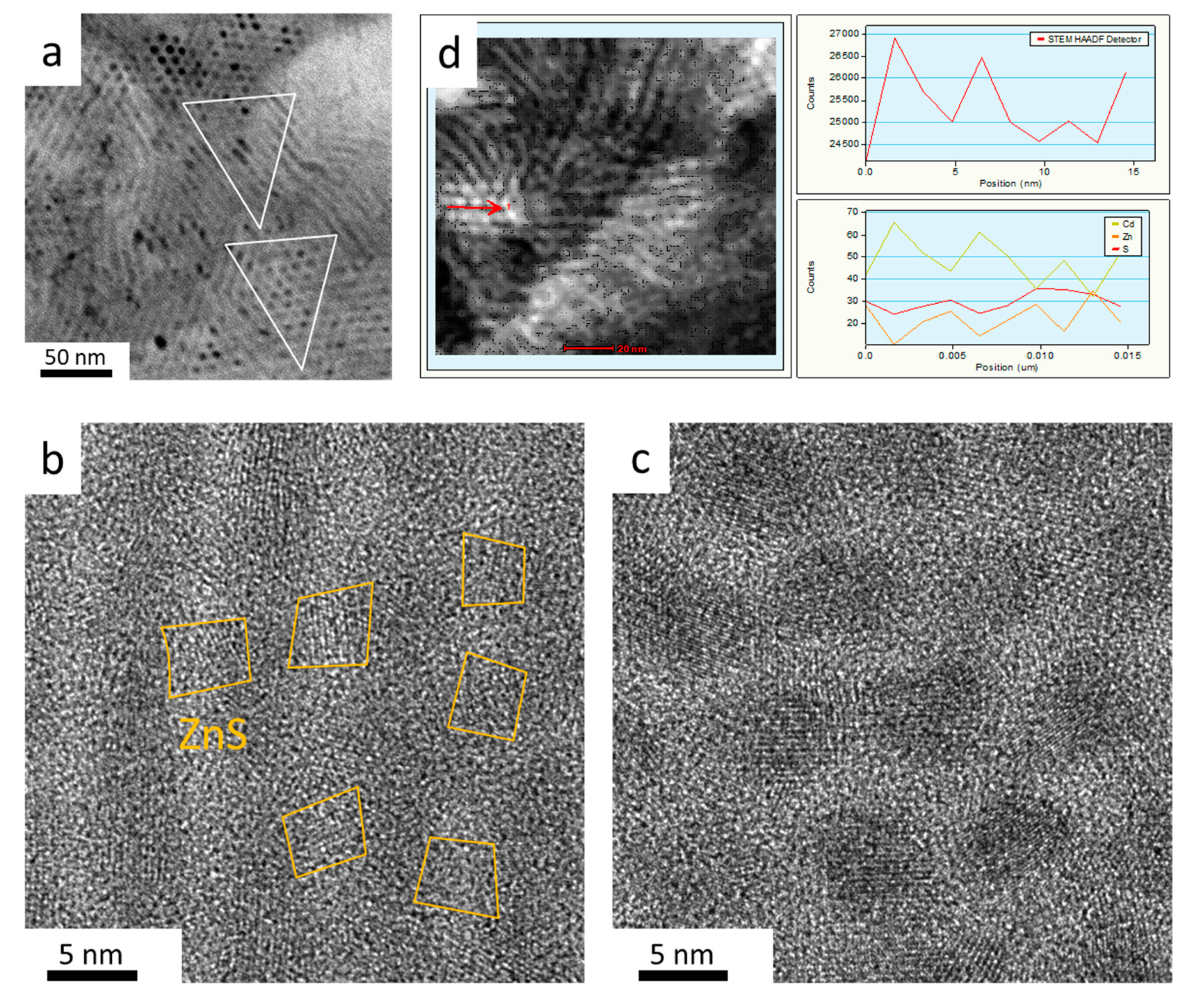 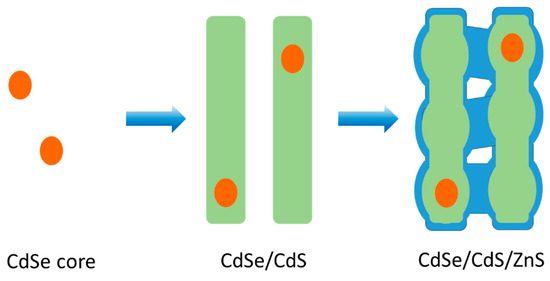 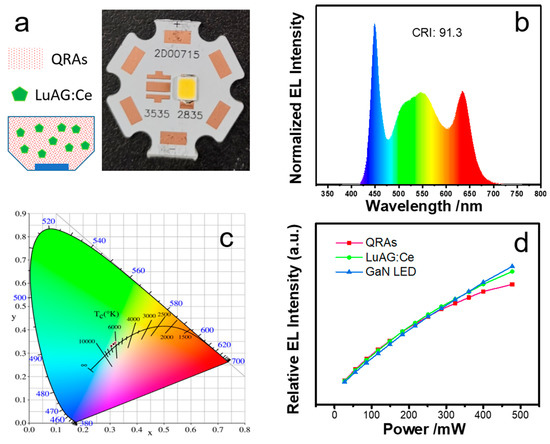