Ultra-Uniform and Very Thin Ag Nanowires Synthesized via the Synergy of Cl−, Br− and Fe3+ for Transparent Conductive Films
Next Article in Special Issue

Rare gases and laser-produced plasmas (LPP) from solid targets have been used as the nonlinear media for high-order harmonic generation (HHG) in extreme ultraviolet (XUV) range [1,2]. Currently, the best achieved conversion efficiency of harmonics is in the range of 10−6–10−5 [3,4]. The HHG efficiency is limited by the harmonic absorption in the generating media and the phase mismatch between the driving field and the harmonics.
The laser plasma plumes are the suitable media for generation of low- and high-order harmonics. The application of LPP allowed studies of different processes, such as the resonance enhancement of single harmonic, quasi-phase matching in multi-jet plasmas, and nanoparticle-enhanced harmonics [5,6,7,8,9,10,11,12,13,14,15,16]. Earlier studies have shown that harmonics emitted from LPPs are more intense with regard to gaseous media [17]. The plasmas containing clusters, nanoparticles (NPs), and large molecular systems enhance the harmonic yield with regard to atomic and ionic structures. Recently, nanostructured and ion-implanted semiconductor targets paved a path to produce strong high-order harmonics as compared to un-patterned samples [18,19].
There is an urgent need to search for methods to generate intense harmonics and attosecond pulses. For these purposes, gas clusters and plasma produced from nanoparticle targets can be used to increase the intensity of harmonics. The motivation of these studies is related with the comparison of the high-order nonlinear optical response of the nanoparticles appearing from the targets during ablation of NP-contained samples and bulk Au samples. The dynamics of plasma formation in the former case can be considered as follows. The material directly surrounding the NPs is a polymer (epoxy glue), which has a considerably lower ablation threshold than the metallic materials. The NPs absorb the laser pulse energy and pass the thermal energy to the surrounding media. Therefore, the NPs-carrying polymer begins to ablate at relatively low intensities, resulting in the lower laser fluence required for the preparation of the appropriate nonlinear medium for the HHG. This feature allowed for easier creation of the optimum plasma conditions, which resulted in a better HHG conversion efficiency from the Au NPs-containing plume compared to the plasma from the bulk target.
The production of clusters in the laser plasma during laser ablation of various targets has a high probability, while their presence and concentration in the plasma volume, where the frequency conversion occurs, is yet to be confirmed directly. Analysis of post-ablation conditions of the deposited debris can provide information on the nature of those species, despite the differences between the composition of the plasma formed at its early stages and the deposited material (due to the influence of aggregation on the substrate). Further evidence of the cluster contribution to the enhancement of the harmonic generation comes from investigations of intense laser ablation of a target, which would give the assumptions regarding the participation of in situ generated nanoparticles.
Gold nanomaterials have potential applications because its surface plasmon resonance affects the optical properties of materials. Here, we study how harmonics obtained from Au NPs are affected by using the active substrate, which itself allows the generation of harmonics. In order to support the experimental measurements and to advance in understanding of the fundamental physical processes underlying the laser-induced formation of Au NPs we perform a series of computer simulations of laser ablation of thick gold target at different irradiation parameters. The used model is capable of addressing the kinetics of strongly non-equilibrium laser-induced phase transition processes at atomic level with Molecular Dynamics (MD) approach.
In this paper, the systematic experimental and numerical studies of the NPs formation during laser ablation and the HHG from Au NPs, Au bulk, paper and Au NPs deposited on paper and glass substrates were carried out. These studies also allow understanding the effects of single-color pump (SCP) and two-color pump (TCP) of plasma, laser chirping, laser pulse duration on the harmonic conversion efficiency from different ablated targets, and the choice of irradiation regimes for generation of NPs with predesigned optical and morphological properties.

The experimental layout of HHG is shown in Figure 1. In total, 100 nm and 10 nm Au NPs (SkySpring Nanomaterials Inc., Houston, TX, USA, 99.95% purity) were glued on the glass substrate and paper, respectively. Notice that ablated pure glue did not allow generation of harmonics in LPP. The studied samples were ablated by nanosecond (1064 nm, 5 ns, 10 Hz; Q-Smart, Coherent, Palo Alto, CA, USA), picosecond (800 nm, 200 ps, 200 Hz) and femtosecond (800 nm, 30 fs, 200 Hz) pulses. Both femtosecond (fs) and picosecond (ps) laser pulses were obtained from the same laser (Spitfire Ace; Spectra Physics, Santa Clara, CA, USA) by separation of the part of uncompressed radiation (200 ps) before entering into the compressor stage. The delay between heating radiation (i.e., fs or ps pulses) and driving fs pulses (800 nm, 30 fs, 200 Hz) was varied in the range of 0–120 ns by using the optical delay line. The delay between heating nanosecond (ns) pulses and driving fs pulses was varied electronically between 0 and 105 ns using a delay generator (DG535; Stanford Research Systems, Sunnyvale, CA, USA). LPP was created by heating pulses, while the driving pulses were focused inside the plasma using 500 mm focal length spherical lens from the orthogonal direction with regard to ablating pulse to generate harmonics. The diameter of focused driving femtosecond pulses was 64 µm. The energy (intensity) of driving pulses employed in our experiment was 0.5 mJ (4 × 1014 W cm−2). The HHG experiments using TCP of LPP were carried out using the 0.2-mm thick β-barium borate (BBO) crystal, which was kept inside the vacuum chamber on the path of 800 nm pulses to generate second harmonic (400 nm). The harmonic spectra were analyzed using a XUV spectrometer and collected by a CCD camera.

3.2. Role of Different Parameters of Driving and Heating Pulses on the HHG Efficiency in Au NP Containing Plasmas 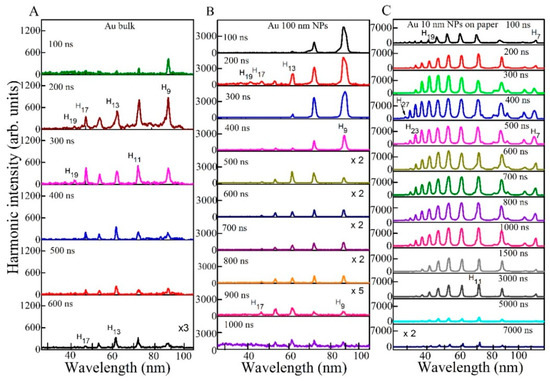 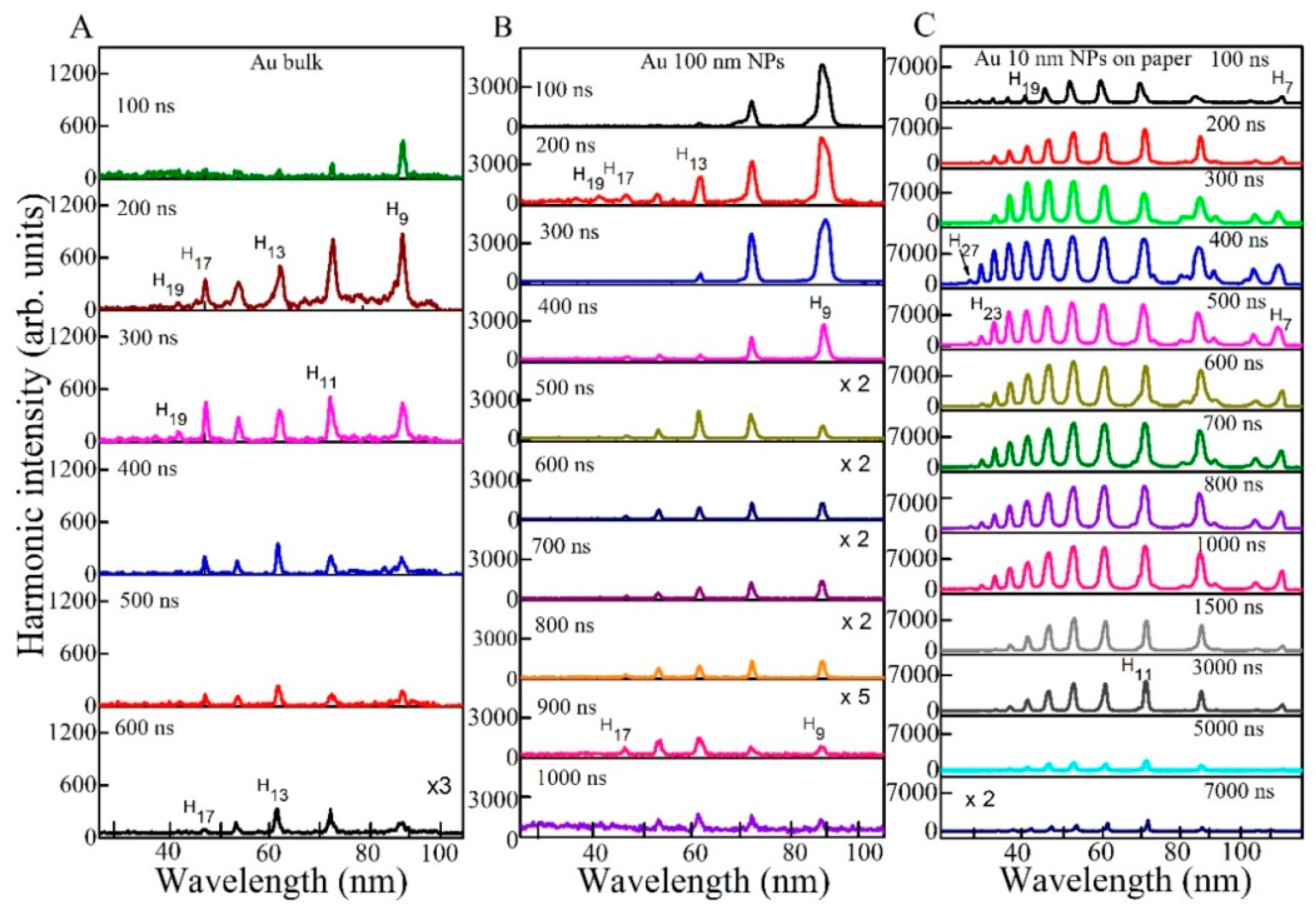 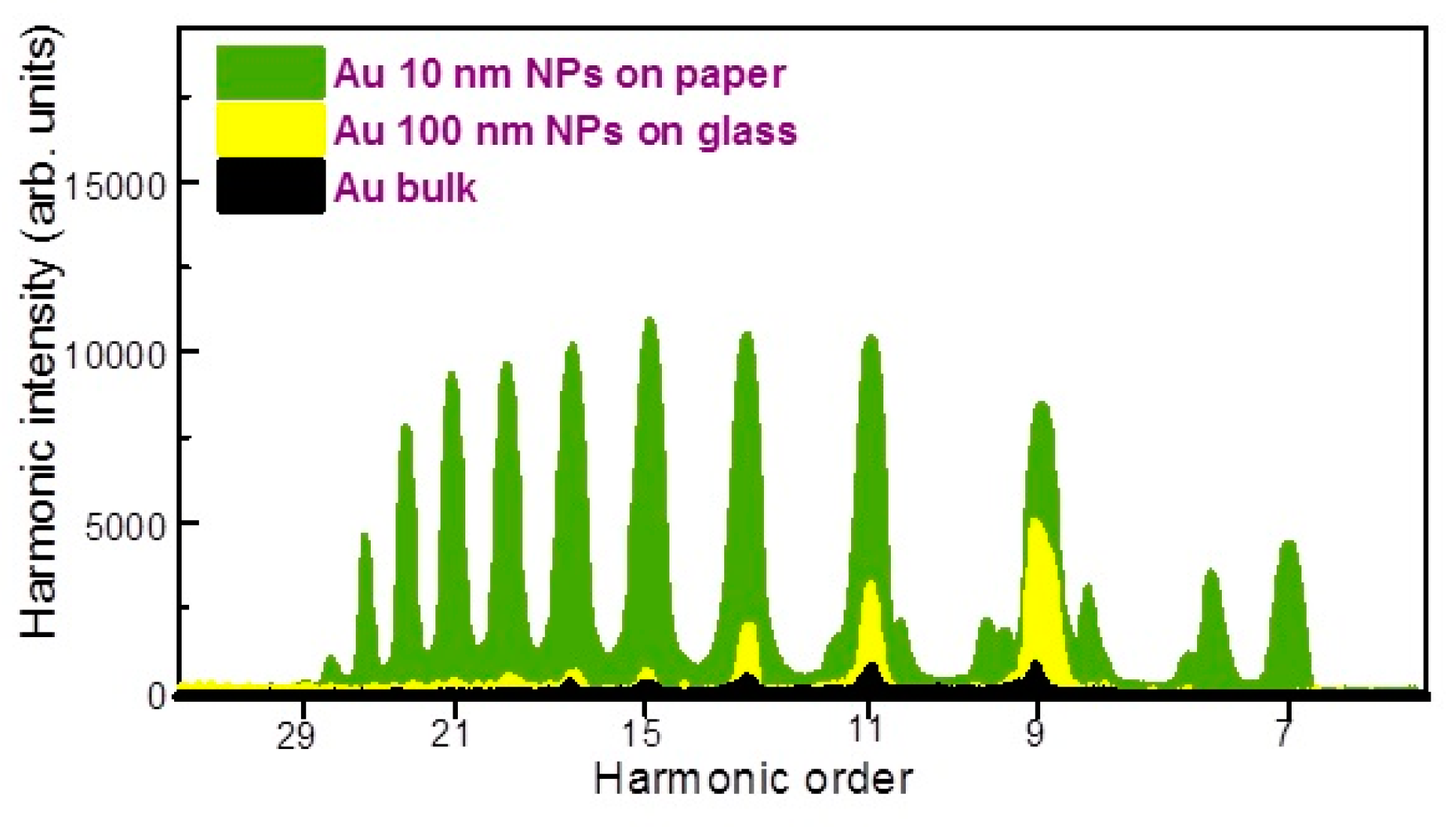 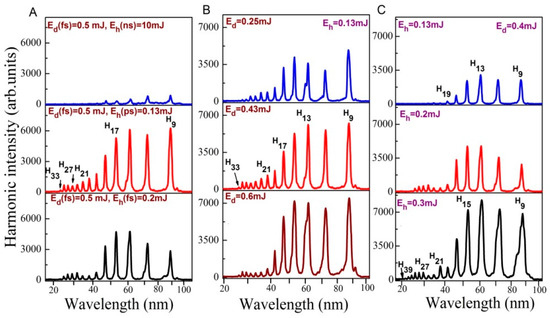 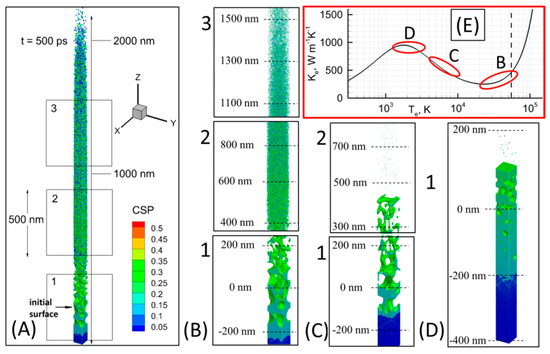 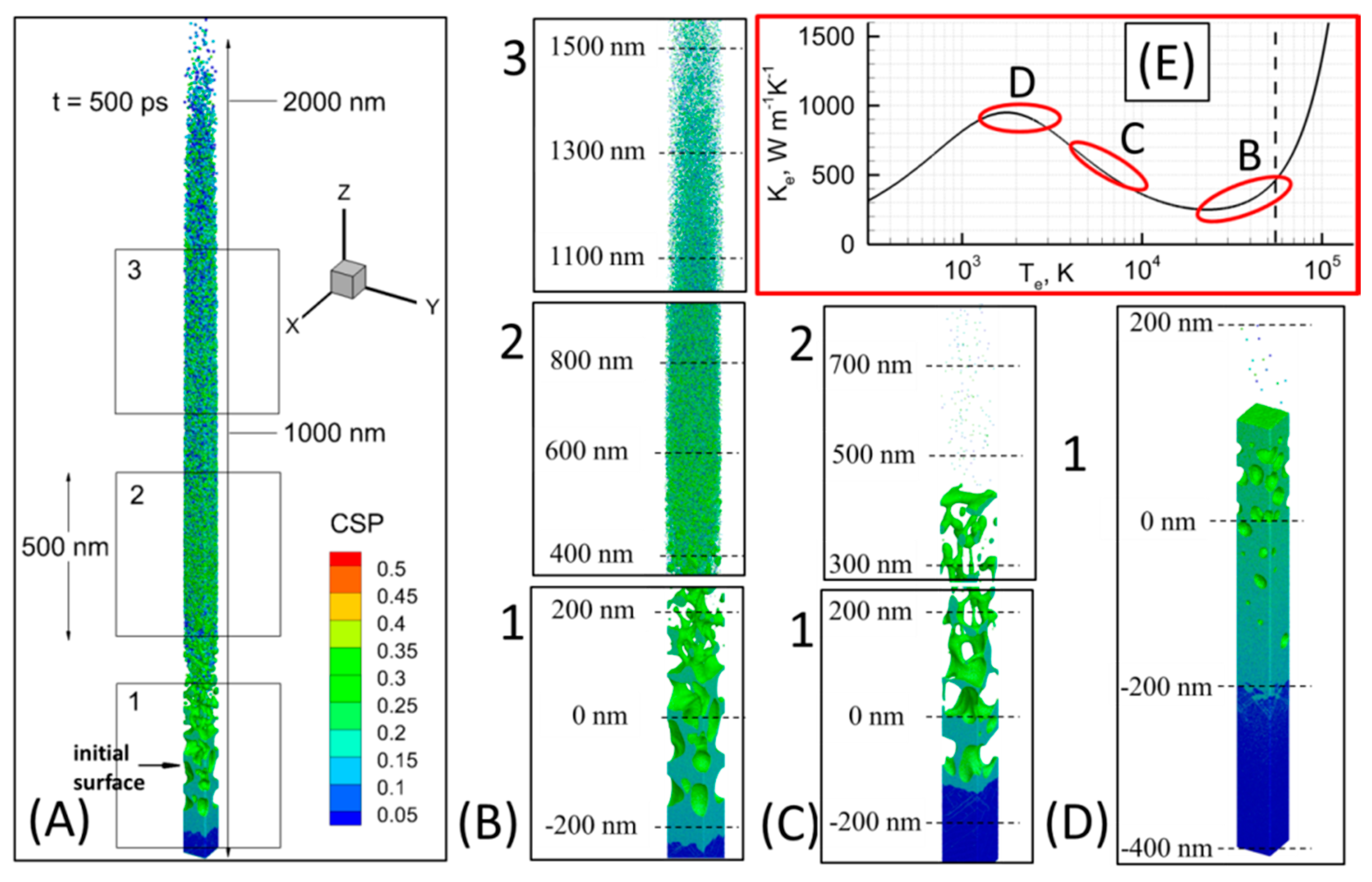