Three-dimensional porous nanostructures made of noble metals represent novel class of nanomaterials promising for nonlinear nanooptics and sensors. Such nanostructures are typically fabricated using either reproducible yet time-consuming and costly multi-step lithography protocols or less reproducible chemical synthesis that involve liquid processing with toxic compounds. Here, we combined scalable nanosecond-laser ablation with advanced engineering of the chemical composition of thin substrate-supported Au films to produce nanobumps containing multiple nanopores inside. Most of the nanopores hidden beneath the nanobump surface can be further uncapped using gentle etching of the nanobumps by an Ar-ion beam to form functional 3D plasmonic nanosponges. The nanopores 10–150 nm in diameter were found to appear via laser-induced explosive evaporation/boiling and coalescence of the randomly arranged nucleation sites formed by nitrogen-rich areas of the Au films. Density of the nanopores can be controlled by the amount of the nitrogen in the Au films regulated in the process of their magnetron sputtering assisted with nitrogen-containing discharge gas.
Keywords: laser ablation; noble-metal films; magnetron sputtering; nanosecond laser pulses; porous nanostructures; plasmonics; nanosponges laser ablation; noble-metal films; magnetron sputtering; nanosecond laser pulses; porous nanostructures; plasmonics; nanosponges

Three-dimensional (3D) percolated porous nanostructures made of noble metals and having large surface-to-volume ratio have drawn significant attention due to their remarkable physicochemical properties allowing to use them for various important applications ranging from the photo- or electro-catalysis, water splitting, hydrogen storage to bio- and chemosensing via surface-enhanced effects [1,2,3,4,5]. For most of the suggested applications, the surface-to-volume ratio defined by the distribution, density and size of the pores within the 3D nanostructure is of crucial importance.
Recently, optical properties of 3D porous nanostructures have become a hot topic [6,7,8,9,10]. Specifically, the porous Au nanoparticles (also referred to as nanosponges) were shown to demonstrate polarization-dependent scattering as well as to support long-lived electron emission associated with localized and propagating surface plasmon modes having remarkably high quality factors. These optical properties make such structures appealing for various optical and nonlinear optical applications including random lasing, enhanced photo-emission, harmonic and supercontinuum light generation, as well as single-molecule biosensing based on metal-enhanced fluorescence, surface-enhanced Raman scattering (SERS), infrared absorption (SEIRA), etc. Multiple sensing applications are benefited from the random (but highly dense) arrangement of the plasmon-mediated electromagnetic (EM) hot spots within the structure allowing to obtain the spectrally broadband signal enhancement over the entire visible and near-IR spectral range [11,12,13,14]. Indeed, incorporation of the nanopores into the bulk plasmonic nanostructures with a sub-wavelength overall size provides more intense SERS signal due to multiple hot spots and enlarged surface area increasing probability for analyte molecules to reach these hot spots [15,16,17,18]. Nevertheless, upon excitation with EM radiation, both the arrangement of the nanosized pores and the overall nanostructure geometry govern the resulting response [19,20]. From this point of view, the plasmonic properties of the resulting 3D porous nanostructures, their general geometric shape as well as porosity are to be adjusted simultaneously that still remains challenging.
State-of-the-art methods for porous nanostructure fabrication generally require complicated multi-step fabrication protocols as dealloying and soft- or hard-template synthesis [21,22,23,24,25,26,27], where accurate management of the reaction conditions (temperature, composition, precursors, etc.) is crucial. Furthermore, the minimization of the surface free energy typically leads to generally spherical-shaped nanostructures. Seed-mediated growth provides simple and versatile method allowing to produce arbitrary-shaped porous nanostructures [28]. However, it’s often problematically to obtain only one desired geometry because of internal structural variations of the seeds as well as local variations of the reaction environment. Alternatively, liquid-free lithography-based approaches as electron- or ion-beam milling [29] are suitable for high-precision formation of geometrically-diverse nanostructures. However, the need for upscaling of the fabrication procedure creates an economically justified barrier for lithography-based techniques being applied for porous nanostructure fabrication and large-area replication. In addition, post-processing is also required to impart porosity into the nanostructures.
Herein, we applied scalable easy-to-implement nanosecond (ns) laser ablation of nitrogen-rich Au films to fabricate parabola-shaped nanobumps containing multiple nanopores inside. The nanopores were found to originate from laser-induced explosive boiling and coalescence of the nucleation sites formed by nitrogen-rich areas of the Au film, while the nanopore density can be controlled by amount of nitrogen used as discharge gas for magnetron sputtering of the Au films. Most of the nanopores hidden beneath the nanobump surface can be further uncapped using gentle etching of the nanobumps by an Ar-ion beam to form 3D plasmonic nanosponges promising for various nonlinear optical and sensing applications.

Au films with a thickness of 150 ± 5 nm were deposited onto silica glass substrates without any adhesion sub-layer using a custom-built magnetron sputtering system and three discharge gases: argon, nitrogen and purified air. Deposition was performed at 10 mbar and fixed applied voltage of 2.5 kV. At the same time, the current was maintained at a constant value of 25 mA by dynamically adjusting the discharge gas pressure that allowed to fix the sputtering rate at ≈1 nm·s for all gases.

2.3. Fabrication of Porous Nanostructures and Nanosponges

Precise pointed ablation of the Au films was performed with second-harmonic (wavelength of 532 nm), ns (pulse duration of 7 ns) laser pulses generated by an Nd:YAG laser system (Brio GRM Gaussian, Quantel, France). The laser radiation was focused into a sub-micrometer spot on the sample surface using a dry objective (Nikon, 50x Plan Fluor, Tokyo, Japan) with a numerical aperture NA of 0.8 (optical spot diameter of 1.22(NA) 0.8 m on the sample surface). The sample was mounted onto a PC-driven nanopositioning platform (ANT series, Aerotech Gmbh., Nurnberg, Germany) allowing spot-by-spot laser printing of the computer-generated patterns with the movement repeatability better than 100 nm. The laser fluence was monitored by a pyroelectric photodetector (Ophir Optronics, Jerusalem, Israel) and adjusted by a PC-driven attenuator (Standa, Vilnius, Lithuania). All nanostructures were produced under identical ambient conditions upon single-pulse laser irradiation.
Additionally, to reveal the nanopores hidden beneath the surface, the laser-printed nanobumps were also post-processed via etching with an accelerated Ar-ion beam (IM4000, Hitachi, Tokyo, Japan) at acceleration voltage of 3 kV, gas flow of 0.15 cm/min and discharge current of 105 A. Such parameters were previously calibrated to provide relatively slow removal rate of ≈1 nm/s [15,30], allowing to avoid excessive heating, melting or deformation of the Au film and laser-printed nanostructures.

Scanning electron microscopy (SEM) was performed with a Helios Nanolab 450 FIB-SEM (Thermo Fisher Scientific, Waltham, MA, USA). High-resolution surface characterization was conducted at an accelerating voltage of 5 kV and electron beam current 100 pA. Signal channels with secondary (SE) and back-scattered electrons (BSE) were simultaneously collected and analysed. Despite the lack of topographical information, the escape depth for BSE is greater than that for SE improving material/density sensitivity. This allows visualisation of the nanopores under the surface with high contrast and spatial resolution.
To shed light onto the internal structure of the nanobumps (nanosponges), we involved a focused ion beam technique to prepare single cross-sectional cuts and serial cuts that were subsequently combined into a 3D reconstruction. After defining the area of interest, deposition (starting from electron beam-induced deposition to prevent surface damage and followed ion beam-induced deposition) of the Pt protective layers was performed. The thickness of the layers was chosen taking into account the morphology and smoothness of the certain laser-printed structure and varied between 150 nm (for nanobumps) and 1000 nm (for through holes). Slicing was carried out using an Ga-ion beam at an accelerating voltage of 30 kV and beam current of 30 pA. After producing subsequent FIB cut, high-resolution SEM image was automatically acquired at 5 kV and 50 pA. The resulting image had a field of view of m at a pixel resolution, which corresponds to the pixel size of nm. A series of 111 slices were acquired and measured slice thickness was 12 nm with standard deviation of 6.54 nm. Further data processing (including alignment, filtration, and visualization) was performed using Aviso 8.1 software (Thermo Fisher Scientific, Waltham, MA, USA).
Three-dimensional finite-difference time-domain (FDTD) calculations were undertaken to reveal local structure of the EM fields excited near the isolated plasmonic nanosponge by linearly-polarized laser pump at 532, 632 and 1030 nm. The pump wavelengths within rather broad spectral range were chosen to highlight potential applications, where the enhanced and localized plasmon-mediated fields are highly demanding including SERS substrates and enhancement of nonlinear optical effects. Representative 3D model of the nanosponge was reconstructed using high resolution top- and side-view SEM images. The linearly polarized laser radiation was modeled to pump the nanosponge from the top. Elementary cell size was nm, while the computational volume was limited by the perfectly matched layers. Dielectric permittivity of Au was modeled according to the data from [31].

Here, we propose a simple approach allowing fabrication of porous plasmonic nanostructures using direct ns-laser ablation followed by Ar-ion beam etching. The nanopores were found to form through the explosive evaporation/boiling of the nitrogen-rich metal film areas exposed by a ns laser pulse. Detailed XPS and SEM analysis confirmed that the density of the nanopores correlates with the initial amount of nitrogen in the Au films that were fabricated by magnetron sputtering assisted with different discharge gases. Demonstrated unique porous nanostructures, parabola-shaped nanobumps perforated with multiple nanoholes, are expected to be useful for various applications where the plasmon-mediated EM fields are of mandatory importance as nonlinear plasmonic and chemo-/biosensing.
In a broader context, advanced chemical engineering of the metal film composition suggested in this paper being combined with an adjustment of the laser ablation process (as optimization of fluence, pulse width, laser beam shaping, etc.) is expected to provide facile way for fabrication of unique nanostructures. Also, elaborated strategy being applied to more complicated material combinations (like metal alloys or metal-dielectric materials) will further enrich the potential types of nanostructures as well as their application range [53,54,55]. For example, in a similar way nanosponges can be produced from co-sputtered noble-metal films forming nano-alloys with engineered permittivity as demonstrated for Au-Cu-Ag [56]. Along with plasmonic hot spot engineering, local potential defined by the nearest atomic composition was shown to modify physical and chemical adsorption of the analyte molecules affecting their characteristic SERS and SEIRA signals and sensor performance [57]. Insights into formation of metallic glasses and high entropy alloys with even large number of constituent materials [58] will benefit from a nanoscale control of re-melting and phase-explosions demonstrated in this work. 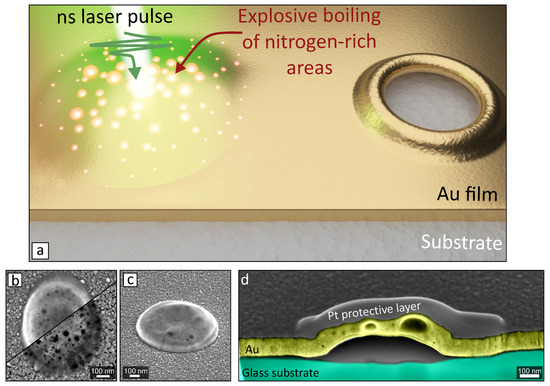 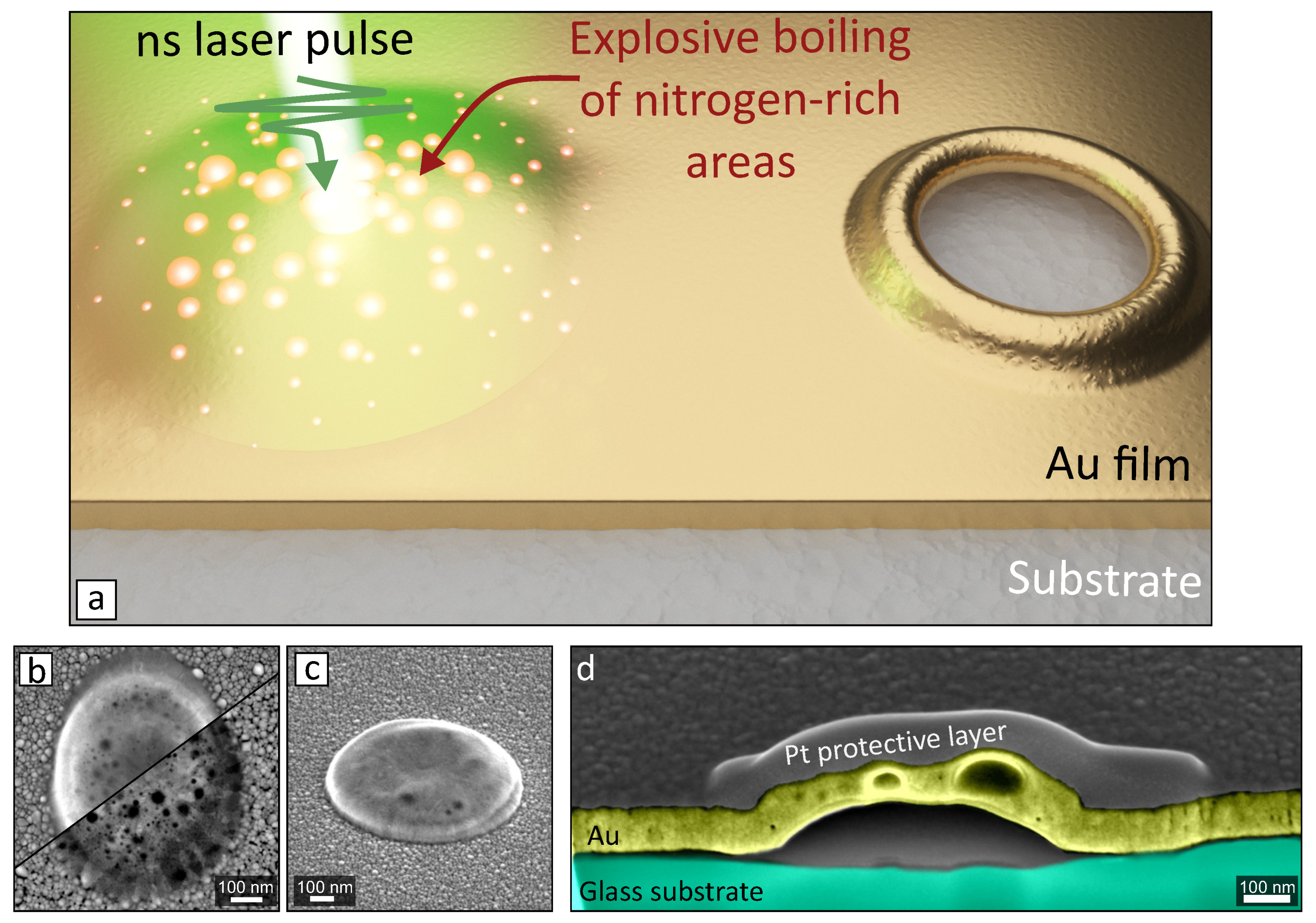 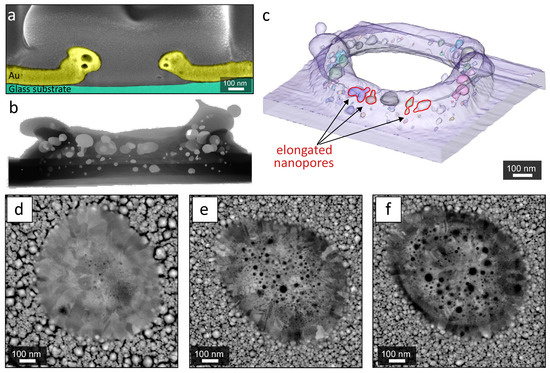 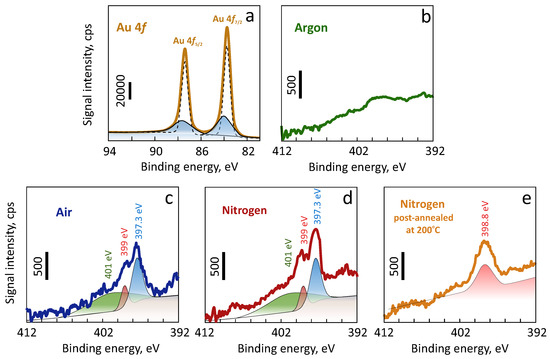 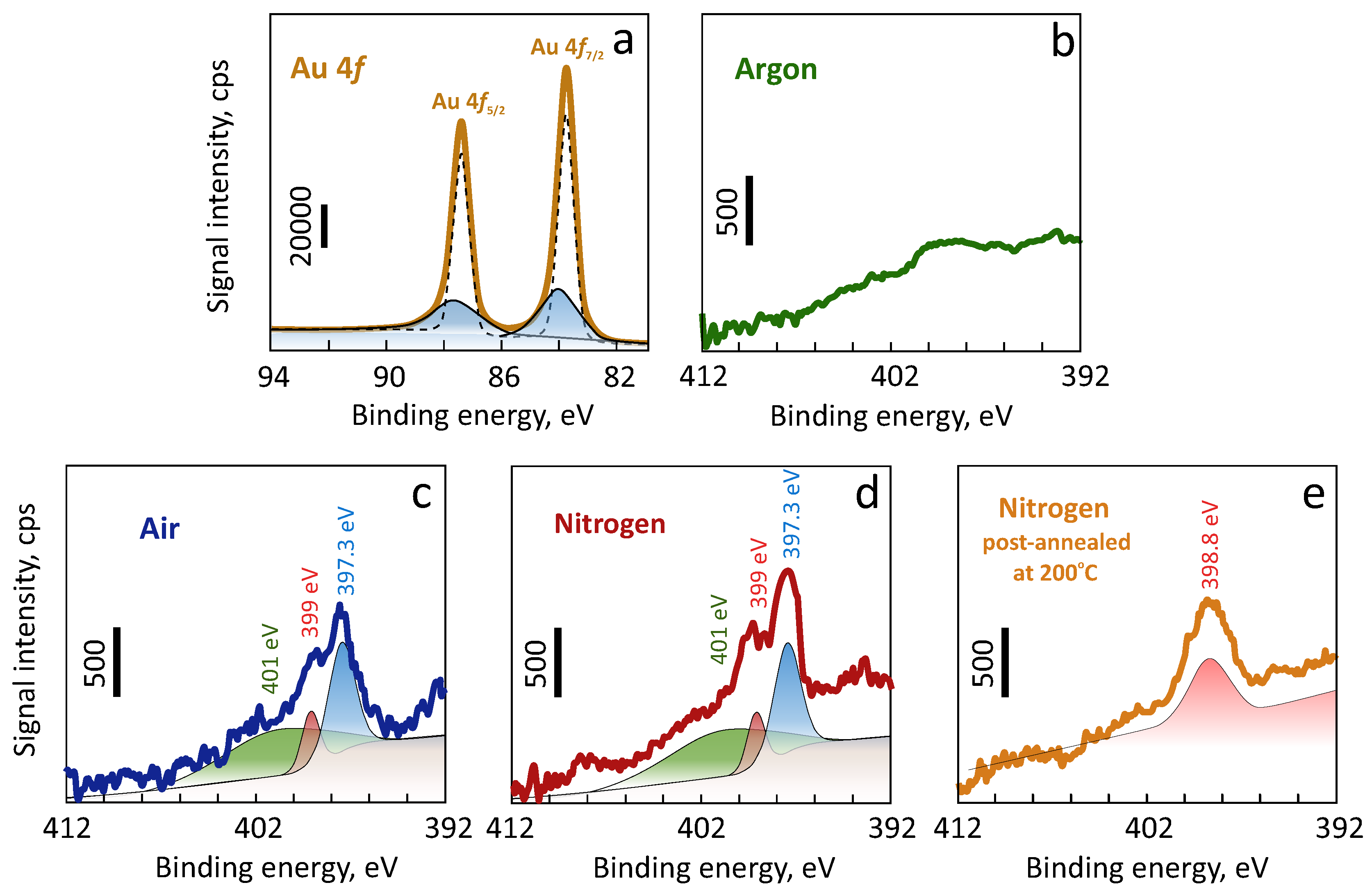 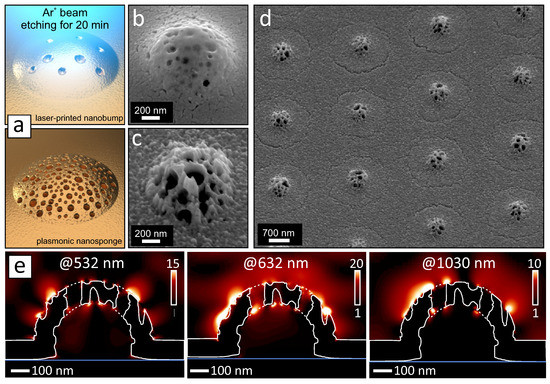