:
Tellurium-doped, mesoporous carbon nanomaterials with a relatively high doping level were prepared by a simple stabilization and carbonization method in the presence of a tellurium metalloid. A transparent counter electrode (CE) was prepared using tellurium-doped, mesoporous carbon (TeMC) materials, and was directly applied to bifacial, dye-sensitized solar cells (DSSCs). To improve the performance of the bifacial DSSC device, CEs should have outstanding electrocatalytic activity, electrical conductivity, and electrochemical stability, as well as high transparency. In this study, to make transparent electrodes with outstanding electrocatalytic activity and electrical conductivity, various TeMC materials with different carbonization temperatures were prepared by simple pyrolysis of the polyacrylonitrile-block-poly (n-butyl acrylate) (PAN-b-PBA) block copolymer in the presence of the tellurium metalloid. The electrocatalytic activity of the prepared TeMC materials were evaluated through a dummy cell test, and the material with the best catalytic ability was selected and optimized for application in bifacial DSSC devices by controlling the film thickness of the CE. As a result, the bifacial DSSC devices with the TeMC CE exhibited high power conversion efficiencies (PCE), i.e., 9.43% and 8.06% under front and rear side irradiation, respectively, which are the highest values reported for bifacial DSSCs to date. Based on these results, newly-developed transparent, carbon-based electrodes may lead to more stable and effective bifacial DSSC development without sacrificing the photovoltaic performance of the DSSC device.
Keywords:
dye-sensitized solar cells; counter electrodes; bifacial devices; tellurium-doped mesoporous carbon; transparency 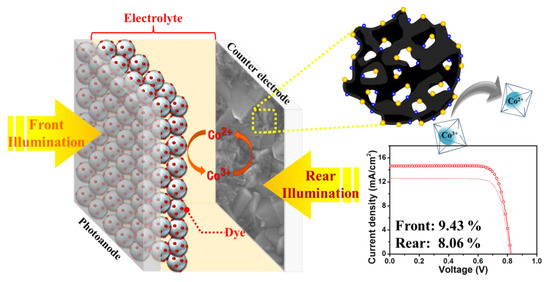 The PAN-b-PBA (polyacrylonitrile-block-poly (n-butyl acrylate) copolymer (2 g) was physically mixed with 1 g of tellurium powder and placed into a quartz furnace. The mixture was stabilized at 280 °C for 2 h under an air atmosphere (heating rate: 5 °C/min) and then carbonized at three different temperatures (700, 800, and 900 °C) for 1 h under a nitrogen atmosphere (heating rate: 5 °C/min). The final products were washed with 1 M HCl and 3 M KOH aqueous solution to remove the unreacted tellurium.

In summary, a transparent CE for bifacial DSSC devices was prepared using TeMC material. The TeMC had a high doping level (tellurium: 0.21 at.% and nitrogen: 5.74 at.%, from XPS study) and consisted mainly of a mesoporous structure with high electrical conductivity. The TeMC CE itself exhibited high transparency, i.e., about 70% (FTO glass: about 80%, Pt CE: about 75%), while maintaining high degree of electrocatalytic activity and electrical conductivity, as well as improved electrochemical stability. When applied to the bifacial DSSC device, the efficiency of the rear side (TeMC: 8.06%, Pt: 8.42%) was slightly lower than that of the Pt CE, because the transmittance was slightly lower than that of Pt, but the front side (TeMC: 9.43%, Pt: 9.23%) showed better performance due to the good electrocatalytic properties. Based on our results, newly-developed transparent, carbon-based electrodes led to a more stable and effective bifacial DSSC without sacrificing the photovoltaic performance of the device. This technology can be applied to various fields, such as batteries, fuel cells, sensors, etc.

This work was funded by the Korean government (Ministry of Science, ICT and Future Planning) through the Mid-career Researcher Program (NRF-2017R1A2A1A17069374), and the Human Resources Program in Energy Technology of the Korea Institute of Energy Technology Evaluation and Planning (KETEP) granted financial resources from the Ministry of Trade, Industry & Energy, Republic of Korea (KETEP-20184030201910).