Nanoparticles as Anti-Microbial, Anti-Inflammatory, and Remineralizing Agents in Oral Care Cosmetics: A Review of the Current Situation
Previous Article in Journal

:
Black phosphorus quantum dots (BPQDs) have recently obtained great attention due to their high mobility and tunable bandgap features, which are beneficial for their potential application in photoelectronic devices. However, a precise synthesis of high-quality BPQDs is still a great challenge owing to the formation of an impurity phase when employing traditional methods. Herein, we demonstrate the scalable fabrication of BPQDs from mineralization-derived bulk black phosphorus (BP) single crystals by means of a microwave (MW)-assisted liquid-phase exfoliation method in ethanol. The primary results demonstrate that ethanol plays a crucial role in determining the final properties of BPQDs, such as their excellent tolerance to oxygen, good crystallinity, and uniform size. Furthermore, the mechanism behind the formation of BPQDs is proposed, revealing that a layer-by-layer disintegration process of bulk BP crystals under microwave-energy stimuli is responsible. This work may provide a novel path for the further development of BPQDs and corresponding devices.
Keywords:
2D materials; black phosphorus quantum dots; mineralization route; microwave-assisted technology; crystal disintegration

Two-dimensional (2D) layered materials, such as representative graphene [1,2], black phosphorus (BP), and transitional metal dichalcogenides (TMDs), have shown great potential application in the fields of electronics and optoelectronics [3,4], which is mainly due to their distinguished structural and electronic characteristics. Until now, state-of-the-art lower-dimensional materials, including 2D or 0D (quantum dots), have generally been exfoliated from bulk materials via chemical or physical methods, resulting in dramatically changed electronic and optical properties compared to those of the bulk materials [5,6,7]. Given the advantages of liquid-phase exfoliation (LPE) technology, such as its scalability, solution processability, and feasibility for creating composite materials [8,9], recently, several groups have produced black phosphorus quantum dots (BPQDs) in anhydrous organic solvents [10,11,12]. However, these solvents are toxic or have high boiling points that are detrimental to large-scale production, and they are difficult to remove upon assembly into a film or composite, especially for BPQDs, which have inferior stability. As a result, the precise analysis of their physicochemical properties and their utilization in micro–nano electronic devices is inevitably limited. Furthermore, the tedious processing time (for example, over 5 h) decreases the crystallinity and creates structural defects [13,14]. Therefore, the development of a novel, environmentally friendly strategy to fabricate BPQDs is urgently needed.
As is well known, the quality of BPQDs is highly dependent on the bulk material’s structure when the top-to-bottom strategy is employed to fabricate high-quality BPQDs. When considering a minimal number of defects, the bulk BP single crystal may be the best choice. Unfortunately, it is still a technological challenge to achieve this goal although several routes have been developed, such as the high-pressure method [15], the bismuth-flux routes [16], and mechanical milling technology [17]. These methods either use toxic chemicals or complex apparatus, are time consuming, or only provide small BP crystals or BP nanoparticles [18]. Herein, we demonstrate high-quality BP single crystals grown via the mineralization route. Compared to the above-mentioned methods, the mineralization route shows superior advantages for the efficient synthesis of high-quality BP single crystals under simple and gentle conditions [19,20,21]. On the basis of these high-quality BP single crystals, an efficient and fast technology to produce excellent quality BPQDs via microwave (MW)-assisted LPE technology in ethanol solution is also reported in this work. According to careful characterization, BPQDs are well crystallized with an average size of 2.4 ± 0.85 nm and a thickness of 2.19 ± 1.33 nm. It should be noted that this technology features a non-toxic ethanol solution and a short processing time. More importantly, BPQD samples are free of impurities and demonstrate excellent long-term stability in the air, which is beneficial for retaining the high quality of their bulk crystals for further analysis and application.

Red phosphorus lump (RP, 400 mg, 99.999%), iodine crystalline (I2, 20 mg, 99.99%), and tin shot (Sn, 30 mg, 99.999%) were sealed in an evacuated silica glass ampoule (11 cm in length and 10 mm in diameter). The ampoule was horizontally placed into a tube furnace, and the temperature was slowly increased to 620 °C. Subsequently, after being kept at 620 °C for 3 h, the temperature was decreased to 500 °C at a rate of 20 °C h−1. After that, the setting temperature was kept at 500 °C for at least 30 min and followed with a natural cooling process. We obtained an almost full conversion of RP to BP single crystals by prolonging the reaction time. Finally, the BP samples, grown as described above, were picked out and washed with ethanol several times to remove the residual mineralizer. The BP crystals were kept in a glovebox for further analysis.

The bulk BP was ground to BP powder, and then the BP powder (25 mg) was immersed in 5 mL of ethanol. Subsequently, the mixture was treated with the first MW system (MW-1) for 11 min at 70 °C, followed by being kept for 30 min at 80 °C using the second MW system (MW-2). After that, the solution was centrifuged at 6000 rpm for 30 min to remove any non-exfoliated BP powder. Finally, the top 50% of the supernatant was collected for further analysis and application.

The large-sized BP single crystals were synthesized through temperature-programmed reactions, including a high-temperature platform for several hours and a slow cooling process, the conditions of which can be found in the experimental section. As seen in Figure 1a, a 1.5 cm bulk BP polycrystal with metallic luster was obtained after the reaction. To better understand the morphology of BP single crystals prepared in this way, a SEM image of the corresponding BP single crystals (see Figure 1b) was produced, which indicated that these BP crystals were uniform in thickness with micro-ribbon morphology. The layered structure, which can be cross-checked from the side view, provides the precondition to obtaining high-quality BPQDs by means of microwave (MW)-assisted LPE technology in ethanol solution. Subsequently, the morphology and crystalline structure of the bulk BP was further characterized using a transmission electron microscope (TEM) image. As shown in Figure 1c,d, a ribbon-like structure was clearly observed with a clear lattice spacing of 0.218 nm, corresponding to the (002) planes of BP crystals, which is good in relation to previously reported values of BP single crystals [21,22,23]. To further confirm the characteristics of the BP crystals, selected area electron diffraction (SAED) was conducted (Figure 1e, upper right inset of Figure 1d), which demonstrated the excellent crystallization of the corresponding materials. As reported previously, both high purity and good crystallinity are extremely important for keeping BP stable in air [24,25,26].
Aiming to reveal the components, the EDS spectrum of the prepared BP crystals is given in Figure 1f. Obviously, only the P element was detected, without any other element. This is an indicator of the formation of high-purity BP materials. Furthermore, the XRD pattern of the bulk BP crystalline, presented in Figure 1g, revealed that the preferred growth crystallographic planes were all (0k0) planes in which the peaks were mainly located at ~16°, 34°, and 52°, corresponding to characteristic diffraction peaks of (020), (040), and (060) planes of orthorhombic BP (space group Cmca (no. 64)) [21,22,23]. Therefore, it can be concluded that BP single crystals were successfully fabricated using this mineralization route, endowing the possibility of precise analysis and application without purification in the future.
During the temperature-programmed process, iodine and tin first evaporate to form SnI4 and SnI2. After the temperature reaches higher than 340 °C, SnI4 decomposes into SnI2. When the temperature rises to about 500 °C, red phosphorus starts to sublimate and form gaseous P, and when it continues to rise to 620 °C, RP completely transforms into gaseous P. Since Sn has a melting point of 231.9 °C and a boiling point of 2602 °C, most of the Sn is in liquid state, and a small part of it forms gaseous Sn. The reactions can be summarized as follows:
I2 (S) → I2 (G)
Sn (S) → Sn (G) + Sn (L)
Sn + I2 → SnI4 Sn + I2 → SnI2
SnI4 → SnI2 + I2
RP → P4 (G)
where S is the solid state, L is the liquid state, and G is the gas state. In the subsequent cooling process, SnI2, Sn, and P4 react to form Sn24P19.3I8 [27,28]. A small amount of gaseous P inevitably forms Hittorf’s phosphorus (HP), deposited on the bottom of the quartz tube [27]. Subsequently, when the temperature is lowered to about 500 °C, the HP acts as a heterogeneous nucleation site for BP nucleation and growth. When the P4 molecule is exhausted, the reaction ends. However, at this stage, the time required for black phosphorus to grow is relatively short, and phosphorus can be completely converted to black phosphorus in 10 h. A temperature of 500 °C is critical for BP growth, as it properly prolongs its holding time and helps single crystal BP growth. The cooling process can be summarized by the following equations:
SnI2 +Sn + P4 ↔ Sn24P19.3I8
P4 (G) → HP
Sn24P19.3I8 + P4 → BP + SnI2

In summary, we synthesized high-quality BP single crystals by using a scalable mineralization method. Using BP single crystals as starting materials, high-quality BPQDs can be quickly and efficiently obtained by exfoliating the BP single crystals in ethanol using MW-assisted LPE technology. During this transformation process, ethanol, as an organic solvent, can efficiently produce ultra-small black phosphorus quantum dots at lower temperatures, making the utilization of BPQDs’ intrinsic properties in applications more convenient. A short experimental time and gentle experimental conditions can effectively prevent oxidation and maintain the original crystallinity. Furthermore, the prepared BPQDs showed extreme stability in air, suggesting that our method has considerable potential for further application. Based on experimental observations, a layer-by-layer disintegration process was proposed to explain the generation of BPQDs during the MW-assisted exfoliation method. We anticipate that this discovery will prove extremely helpful in promoting the development of efficient and fast synthesis for the high-quality nanofabrication of BPQDs.

This research was supported by the National Natural Science Foundation of China (NSFC) (U1802257, 21701140), the Key Applied Basic Research Program of Yunnan Province (Grant No. 2017FA024), and the Program for Innovative Research Team (in Science and Technology) of Yunnan University. 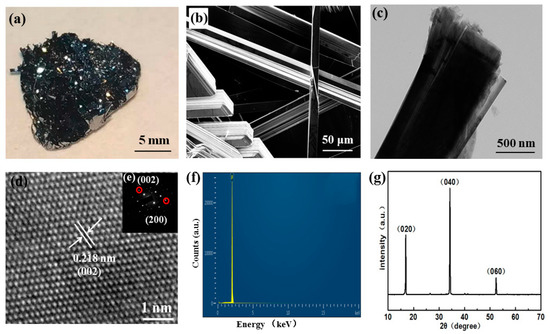 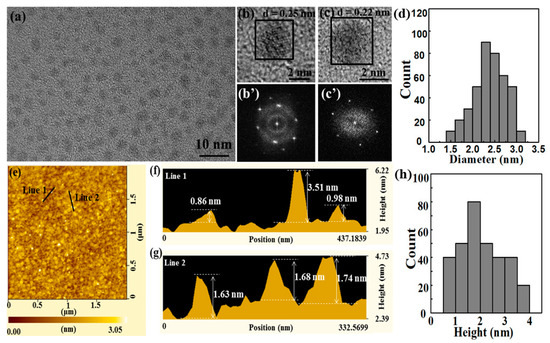 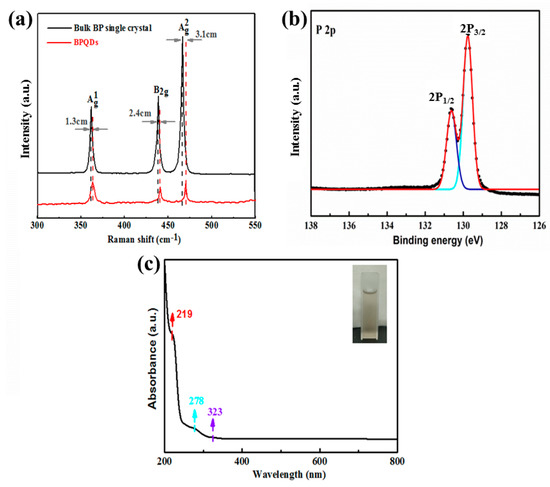 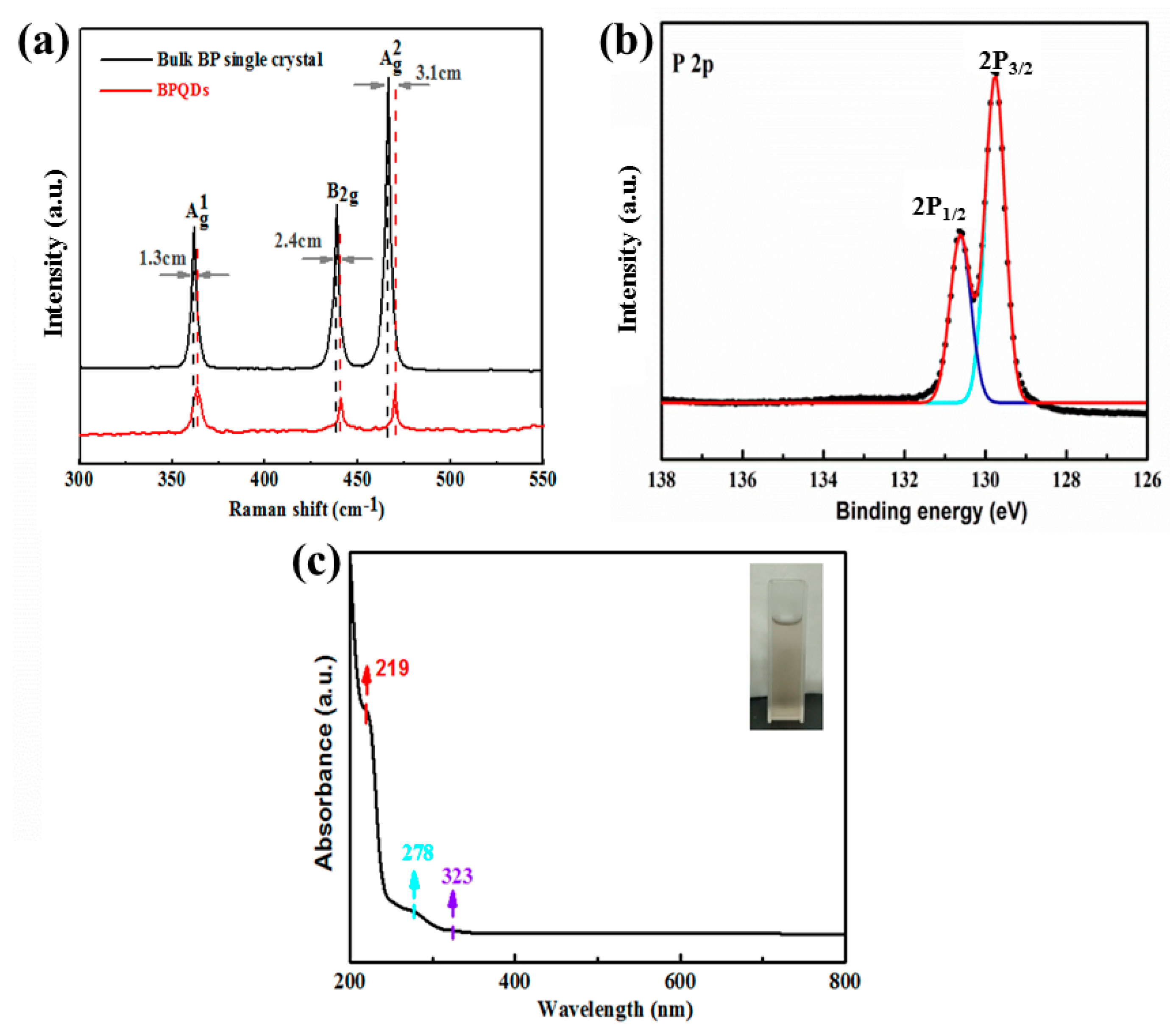