The impacts of climate change are not equally distributed globally. We examined the global distribution of CO2 emissions and the ensuing distribution of increases in the risk of zinc and protein deficiency resulting from elevated atmospheric CO2 concentrations. We estimated cumulative per capita (2011–2050) CO2 emissions for 146 countries using existing measurement data and by apportioning regional emissions projections. We tested the relationship between cumulative per capita CO2 emissions and the risk of additional zinc and protein deficiency at the population-level and country-level. At the population-level (i.e., population-weighted), we observed a significant inverse association between CO2 emissions and the percentage of the population placed at additional risk of zinc (p-value: <0.001) and protein (p-value: <0.01) deficiencies. Country-level (i.e., unweighted) analyses produced significant but less strong associations. Populations with lower per capita CO2 emissions between 2011 and 2050 will experience a disproportionately high nutritional burden, highlighting socioeconomic, geospatial, and intergenerational injustices. View Full-Text
Keywords: climate change; nutrition; environmental justice climate change; nutrition; environmental justice
►▼ Show Figures 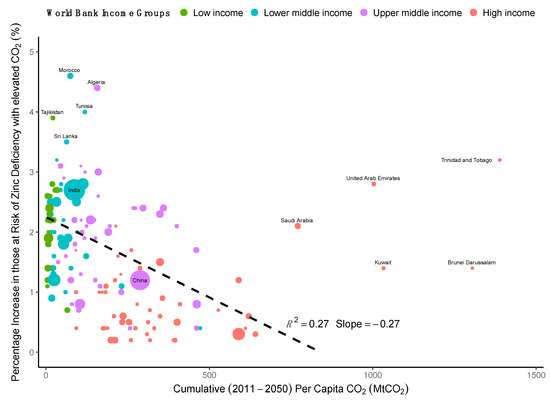