Charitable Sporting Events as a Context for Building Adolescent Generosity: Examining the Role of Religiousness and Spirituality

Previous research demonstrates an association between religiousness, spirituality, and generosity in adolescents, but few studies have tested the mechanisms by which religion might facilitate the development of generosity in real-world contexts. In this paper, a theoretical model is presented describing the potential mechanisms by which engagement in transformational contexts (i.e., participating in charity marathon training) may lead to the development of generosity in adolescents. Participation in charity sporting events is theorized to increase generosity through both higher-order mechanisms, such as sanctification and the development of transcendent identity, and lower-order mechanisms, such as increased entitativity, positive emotions, and dissonance reduction. An empirical strategy for testing the model is presented; suggested methods for inquiry are longitudinal mixed method designs incorporating observations, questionnaires, and qualitative interviewing. Additionally, a case study of ongoing research on adolescents running with Team World Vision is described as an application of the model to an actual research context. View Full-Text
Keywords: generosity; religion; spirituality; adolescents; sport generosity; religion; spirituality; adolescents; sport
►▼ Show Figures 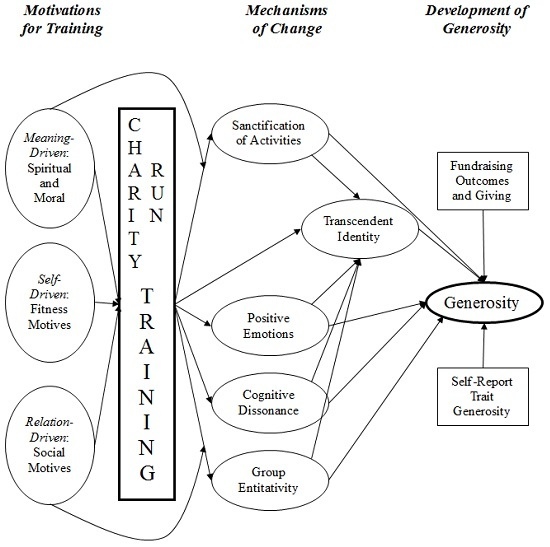 
Fernandez, Nathaniel A., Sarah A. Schnitker, and Benjamin J. Houltberg. 2016. "Charitable Sporting Events as a Context for Building Adolescent Generosity: Examining the Role of Religiousness and Spirituality" Religions 7, no. 3: 35. https://doi.org/10.3390/rel7030035