CDOM Spatiotemporal Variability in the Mediterranean Sea: A Modelling Study
Next Article in Special Issue

Visual observations of the marine biodiversity can be difficult in specific areas for different reasons, including weather conditions or a lack of observers. In such conditions, passive acoustics represents a potential alternative approach. The objective of this work is to demonstrate how information about marine biodiversity can be obtained via detailed analysis of the underwater acoustic environment. This paper presents the first analysis of the Saint-Pierre-and-Miquelon (SPM) archipelago underwater acoustic environment. In order to have a better knowledge about the marine biodiversity of SPM, acoustic recordings were sampled at different time periods to highlight seasonal variations over several years. To extract information from these acoustic recordings, standard soundscape and ecoacoustic analysis workflow was used to compute acoustic metrics such as power spectral density, third-octave levels, acoustic complexity index, and sound pressure levels. The SPM marine acoustic environment can be divided into three main sound source classes: biophony, anthrophony, and geophony. Several cetacean species were encountered in the audio recordings including sperm whales (which were detected by visual observations and strandings of 3 males in 2014), humpback, and blue whales. View Full-Text
Keywords: underwater; acoustic environment; ecoacoustics; noise levels underwater; acoustic environment; ecoacoustics; noise levels
►▼ Show Figures 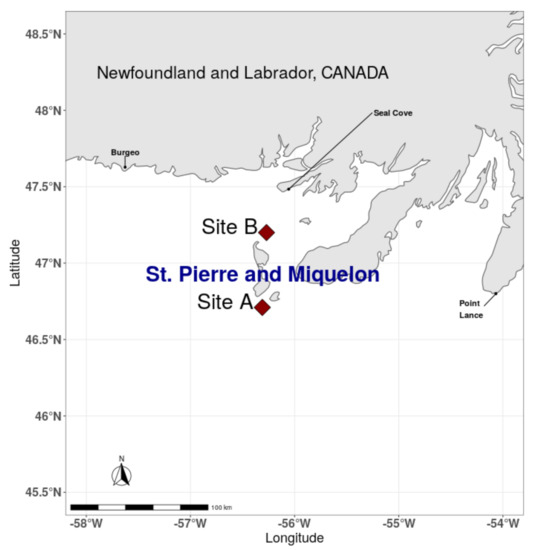