Knowledge of the droplet size distribution (DSD) of spilled oil is essential for the accurate prediction of oil transport, dissolution, and biodegradation. Breaking waves play important roles in oil droplet formation in oceanic environments. To understand the effects of breaking waves on oil DSD, oil spill experiments were designed and performed in a large-scale wave tank. A plunging breaker with a height of about 0.4 m was produced using the dispersive focusing method within the tank. Oil placed within the breaker resulted in a DSD that was measured using a shadowgraph camera and found to fit a Gaussian distribution (µ = 1.2 mm, σ2 = 0.29 mm2). For droplets smaller than 1500 µm, the number-based DSD matched the DS1988 correlation, which gives N(d) ~ d−2.3, but this was N(d) ~ d−9.7 for droplets larger than 1500 µm. An order of magnitude investigation revealed that a Gaussian volume-based DSD results in a number-based DSD that may be approximated by d−b (with b ≈ 2) for small diameters (relative to the mean), which explains the occurrence of the DS1988 correlation. With the measured wave hydrodynamics, the VDROP model was adopted to simulate the DSD, which closely matched the observed DSD. The present results reduce the empiricism of the DS1988 correlation. View Full-Text
Keywords: oil dispersion; droplet size distribution; plunging breaker; dispersive focusing method; VDROP model; shadowgraph camera; ImageJ oil dispersion; droplet size distribution; plunging breaker; dispersive focusing method; VDROP model; shadowgraph camera; ImageJ
►▼ Show Figures 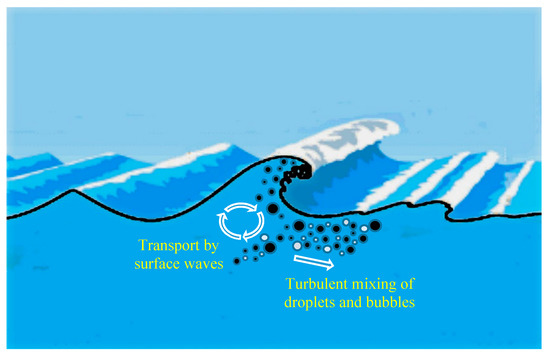