A New Solution for Sea Wave Energy Harvesting, the Proposal of an Ironless Linear Generator
Next Article in Special Issue

The Nagoya Protocol on Access to Genetic Resources and Fair and Equitable Sharing of Benefits Arising from their Utilization came into force in October 2014. In the European Union (EU), new legislation had to be developed in order to apply the mandatory elements of the Protocol, namely, the Regulation (EU) Nº 511/2014 (ABS Regulation) and the Implementing Regulation (EU) 2015/1866, laying down detailed rules for the implementation of Regulation ABS with regard to the register of collection, monitor user compliance, and best practices. As a consequence, EU countries had to develop their own legislation in order to implement the Nagoya Protocol (NP), as well as the EU regulations. One important fact that distinguishes the national legislation of the EU countries is that some countries choose to control access to genetic resources (GR), while others do not apply access measures. The Atlantic Area countries in the EU share an attractive coastline with regard to the potential of their GR. In addition, the microalgae industry has been identified as a business sector with high potential. Therefore, it is important for GR users to be informed about the existing regulations and the national differences that may occur within EU countries. In this article, the origins and main content of the Nagoya Protocol are described, together with their implications at the EU level and particularly in the countries of the Atlantic Area region. As a result, a decision framework is proposed in order to support the GR users among this region. View Full-Text
Keywords: biodiversity; genetic resources; regulation (EU) No. 511/2014; access and benefit-sharing; Interreg Atlantic Area biodiversity; genetic resources; regulation (EU) No. 511/2014; access and benefit-sharing; Interreg Atlantic Area
►▼ Show Figures 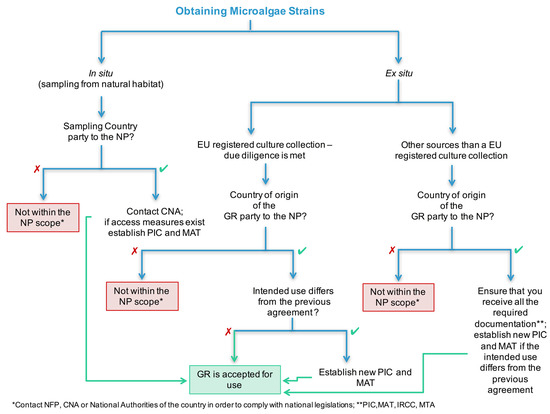