Experimental Analysis of Wave Overtopping: A New Small Scale Laboratory Dataset for the Assessment of Uncertainty for Smooth Sloped and Vertical Coastal Structures

Most physical model tests carried out to quantify wave overtopping are conducted using a wave energy spectrum, which is then used to generate a free surface wave time series at the wave paddle. This method means that an infinite number of time series can be generated, but, due to the expense of running physical models, often only a single time series is considered. The aim of this work is to investigate the variation in the main overtopping measures when multiple wave times series generated from the same spectrum are used. Physical model tests in a flume measuring 15 m (length) by 0.23 m (width) with an operating depth up to 0.22 m were carried out using a stochastic approach on two types of structures (a smooth slope and a vertical wall), and a variety of wave conditions. Results show variation of overtopping discharge, computed by normalising the range of the discharges at a certain wave condition with the maximum value of the discharge in the range up to , when the same wave time series is used, but this range increases to when different time series are used. This variation is found to be of a similar magnitude to both the one found with similar experiments looking at the phenomena in numerical models, and that specified by the confidence bounds in empirical methods. View Full-Text
Keywords: small scale physical modelling; wave overtopping; uncertainty analysis; random waves; wave spectra small scale physical modelling; wave overtopping; uncertainty analysis; random waves; wave spectra
►▼ Show Figures 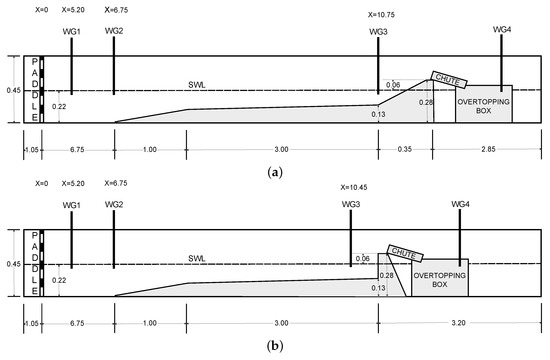