Terrestrial landslides are efficient agents for the transport of rock, sediment, and carbon [1]. Alarmingly, submarine landslides on continental slopes can be more tremendous in scale—up to three orders of magnitude larger than terrestrial landslides in terms of total volume [2,3,4]. The volume of a single prodigious submarine landslide can be hundreds of times larger than the annual sediment flux from all the world’s rivers to the ocean. An example is the Storegga slide, with over 3000 km3 of sediment—long considered to be the largest submarine slide on earth [5,6]. Recently, a similar giant submarine landslide caused by the reactivation of major intra-plate faults, the Halibut Slide, was found in the North Atlantic [7]. The latest large submarine landslide triggered by the 2011 Tohoku earthquake covered an area of ~27.7 km2 [8]. Prodigious submarine landslides are rare, but can dramatically alter seafloor morphology and sedimentary structure, generate huge tsunamis, and damage offshore infrastructures [3,9,10,11]. The Grand Banks landslide in 1929 broke 12 telegraph cables and generated a tsunami with runup of 13 m [12]. A submarine landslide with a volume of ~5 km3 in Papua New Guinea generated a tsunami killing 2200 people in 1999 [13]. The 2011 Tohoku tsunami with runups of 20 m was also exemplified by the part contribution of a submarine landslide [14]. Exploring giant submarine landslides on a long time scale will provide clues for global change and tectonic events. Giant submarine landslides attract immense research interest on the global level due to their geological, ecological, societal, and economical significance.
Submarine landslides are widespread in the Pearl River Mouth Basin (PRMB, Figure 1, [15]), which is the main reservoir of oil, gas, and gas hydrate in the northern South China Sea. However, many submarine landslides have been buried or obscured. It is difficult to recognize and map them accurately. Apart from numerous small-scale submarine landslides, 142 mass transport complexes with an average area of over 7 km2 can be found in the submarine canyons of PRMB. In deeper waters, a series of Quaternary mass transport complexes with a total areal extent of ~11,000 km2 and a conservative volume estimate of ~1035 km3 are recognized [16,17]. Alarmingly, two large submarine landslides or submarine creep zones have been discovered in the PRMB, including the Baiyun slide (>13,000 km2; ~0.3 Ma; Figure 1) and the Dongsha creep zone (>800 km2; active at present; Figure 1) [18,19,20]. Here, we summarize several pieces of evidence and report the world’s potentially largest landslide (the Baiyun–Liwan submarine slide, Figure 1) in the South China Sea, as well as its scale, timing, and triggering mechanism. It is proposed that the recognition and study of the giant Baiyun–Liwan submarine slide will promote the understanding of not only its associated geohazards but also the spreading of the South China Sea, the steep rise of the Himalayan orogeny, and marine engineering.

The Baiyun–Liwan submarine slide is located mainly at the Baiyun Sag and Liwan Sag, in the southern part of the PRMB and close to the continent–ocean boundary of the South China Sea [15]. The PRMB is the largest basin in the northern continental margin of the South China Sea. From north to south, the PRMB includes three uplifts and two depressions: the Northern Terrace, the Northern Depression (Zhu Ⅰ Depression and Zhu Ⅲ Depression), the Central Uplift (Shenhu Uplift, Panyu Low Uplift, and Dongsha Uplift), the Southern Depression (Zhu Ⅱ Depression, and Chaoshan Depression), and the Southern Uplift (Figure 1) [21]. From bottom to top, eight formations are identified in the PRMB, namely, the Shenhu, Wenchang, Enping, Zhuhai, Zhujiang, Hanjiang, Yuehai, and Wanshan Formations. The PRMB experienced three major tectonic evolution stages: rifting (65–30 Ma), transition (30–23.8 Ma), and thermal subsidence (23.8 Ma–present) [15,22].
The Baiyun Sag is bordered by the Panyu Low Uplift to the north and the Liwan Sag and the Southern Uplift to the south (Figure 1 and Figure 2). Covering an area of more than ~30,000 km2 and exceeding 11 km in thickness, the Baiyun Sag and the neighboring Liwan Sag are the largest and deepest sags in the PRMB [23,24]. In addition, Liwan 3-1, the largest offshore platform in Asia, is built in the Baiyun Sag. Gas hydrate production tests were also conducted there in 2017 [25].
Our study suggests that the head scarp of the Baiyun–Liwan submarine slide is located at the northern Baiyun Sag and that the main slide body blankets the Baiyun Sag and the Liwan Sag. The landslide masses moved southeastwards, and some masses were transported to Ocean Drilling Program (ODP) Site 1148 and even further. The landslide extends for over ~250 km, and the total affected area of the slide is up to ~35,000–40,000 km2.

3. Evidence of the Baiyun–Liwan Submarine Slide

3.1. Shoreward Migration of the Shelf Break

3.2. Slump Deposition to the Southeast

Slump deposition, found in ODP Core 1148 at ~458–472 mcd (meter composite depth), provides another important piece of evidence for the Baiyun–Liwan submarine slide. ODP Site 1148 (18°50.17′N, 116°33.94′E; water depth 3294 m) is located on the lower continental slope to the southeast of the Baiyun Sag. There, an ~860 m long composite section spanning more than the last 32 Ma was recovered. It was the most offshore site, with the longest core drilled during ODP Leg 184. The dominant lithology at ODP Site 1148 is clay with a variable proportion of nannofossils [34]. The sediment sequence is mainly characterized by three sections: a rapidly deposited Oligocene section (Section 1) and a relatively slowly deposited Miocene to Pleistocene section (Section 3), divided by slumped and faulted intervals at 458–472 mcd (Section 2) [35,36]. Section 2, though similar in composition to the overlying and underlying sections, is dominated by episodic gravitational redeposition, including mass flows and slumping. The Oligocene–Miocene boundary sediments represent massive convolute bedding, soft-sediment plastic deformation, and light-colored carbonate mud clasts of nannofossil chalk, especially at 458–460 mcd (Figure 4). Normal microfaults are common at 460–472 mcd (Figure 4).
Coincidentally, the slump deposition is constrained between 23.5 and 24.5 Ma [37]; this epoch is quite close to 23.8 Ma, when the shelf break in the Baiyun Sag shifted from south to north. Given the concurrent events (shift of the shelf break in the Baiyun Sag and the slump deposition at the ODP Site 1148) and the relative elevation (high in the Baiyun Sag and low in ODP Site 1148), we conclude that the Baiyun–Liwan submarine slide does exist and occurred in the Oligocene–Miocene boundary. When the slide occurred, the submarine blocks were removed and transported to the deeper water. Some of these blocks were deposited at ODP Site 1148, forming the slump deposition at 458–472 mcd.

Three concurrent events (the shoreward shift of the shelf break in the Baiyun Sag, the slump deposition, and the abrupt decrease in the accumulation rate on the lower continental slope) indicate the giant Baiyun–Liwan submarine slide in the PRMB, South China Sea, at ~23 to 24 Ma, in the Oligocene–Miocene boundary. This landslide extends for over ~250 km, with the total affected area of the slide up to ~35,000 to 40,000 km2. The scale of the Baiyun–Liwan submarine slide is similar to that of the Storegga slide, which has long been considered to be the largest submarine slide on earth. Our research suggests that coeval events (the strike–slip movement along the Red River Fault and the ridge jump of the South China Sea) in the Oligocene–Miocene boundary triggered the Baiyun–Liwan submarine slide. Attention needs to be paid to areas with repeated submarine landslides and offshore installations.

Authors are indebted to the Ocean Drilling Program Leg 184. 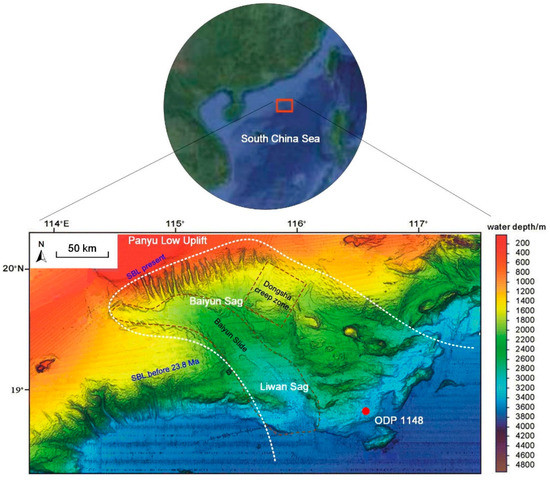 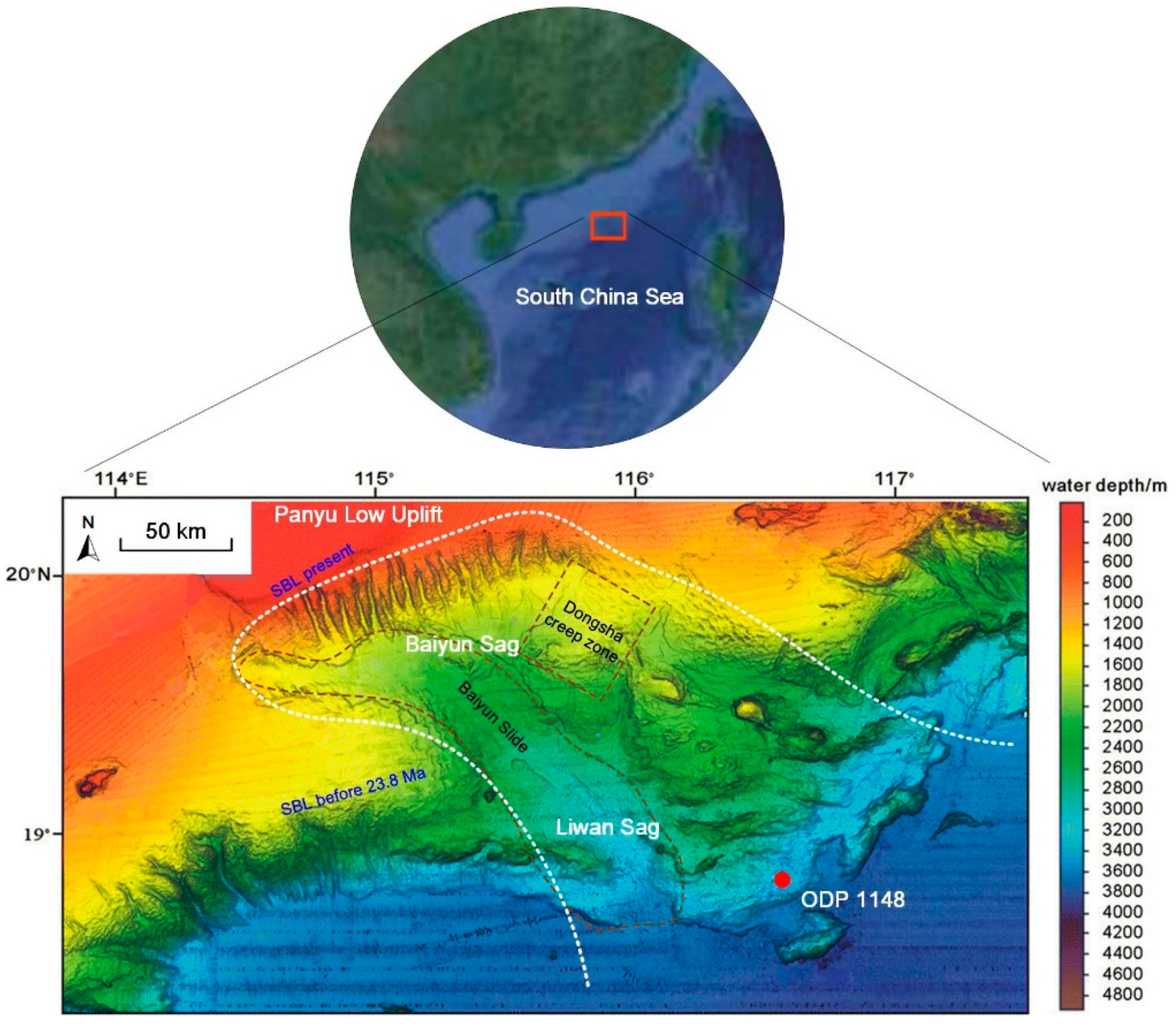 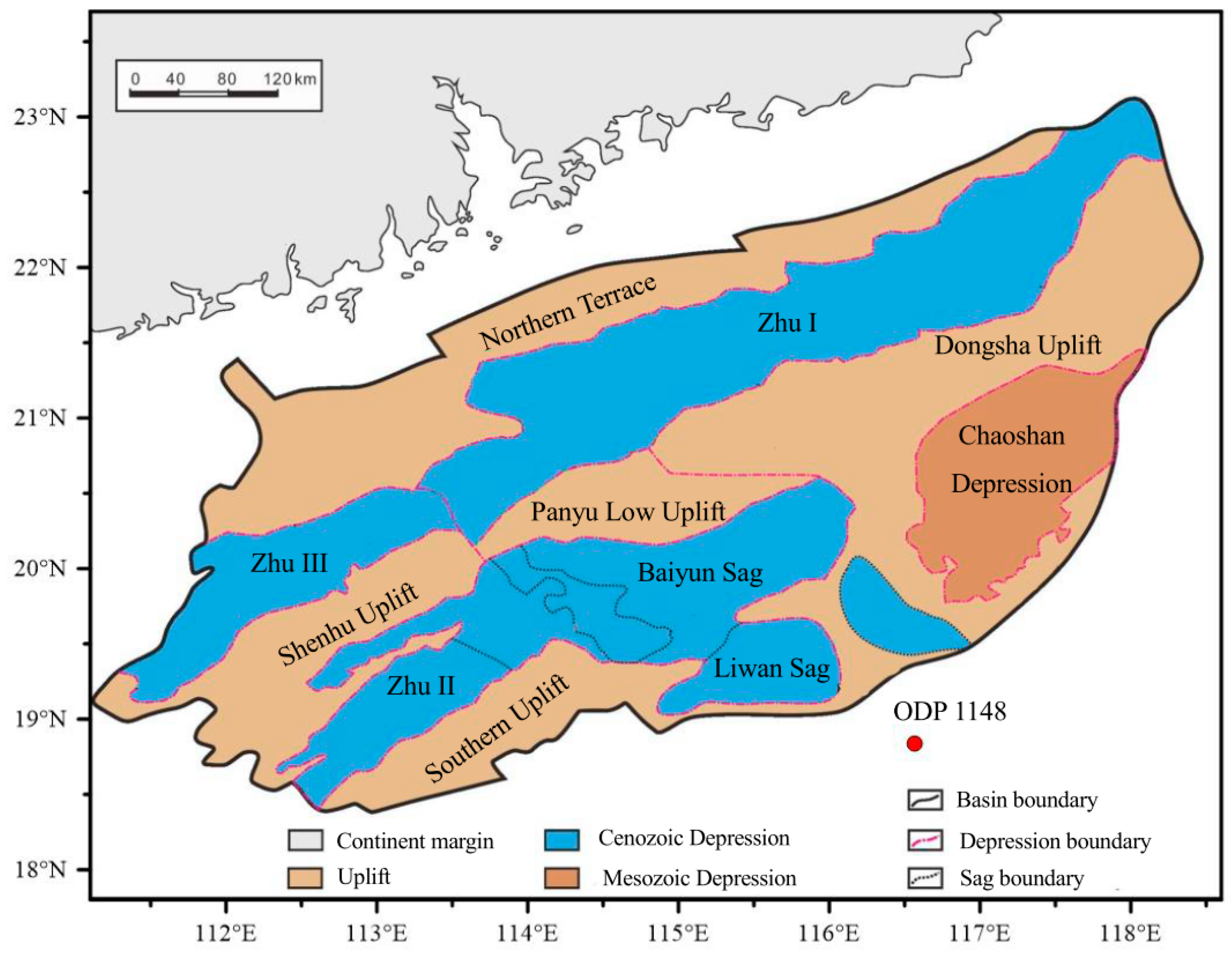 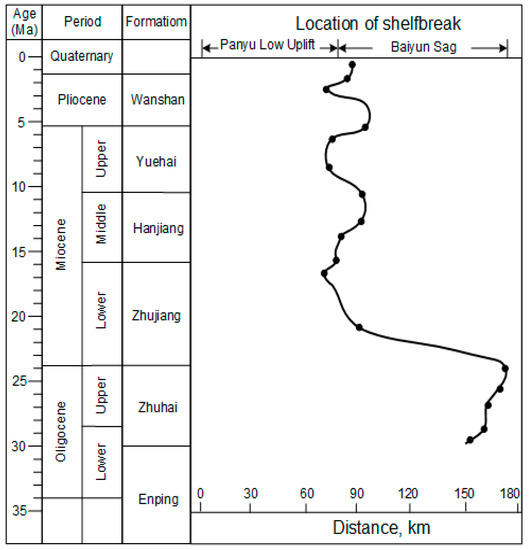 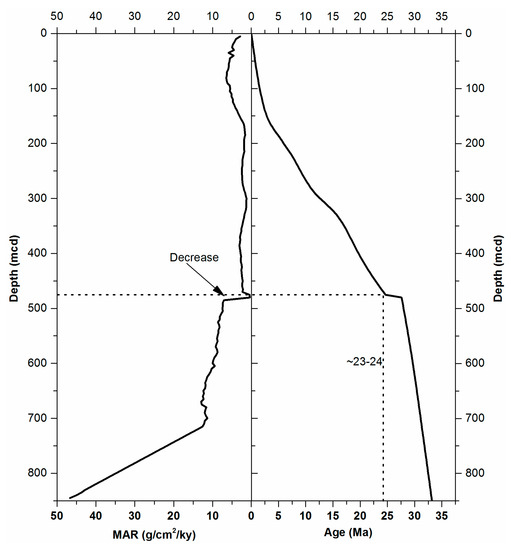 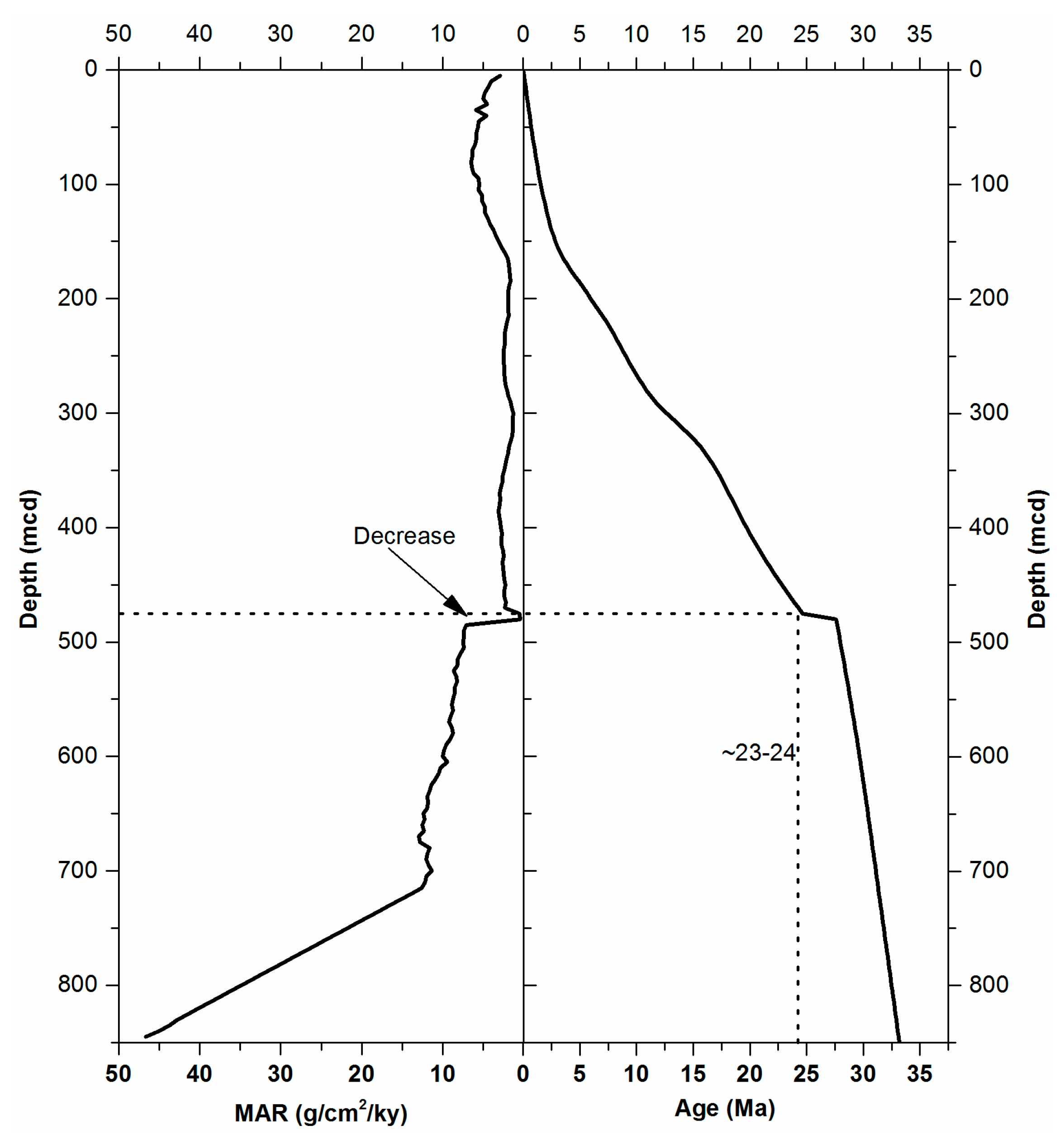 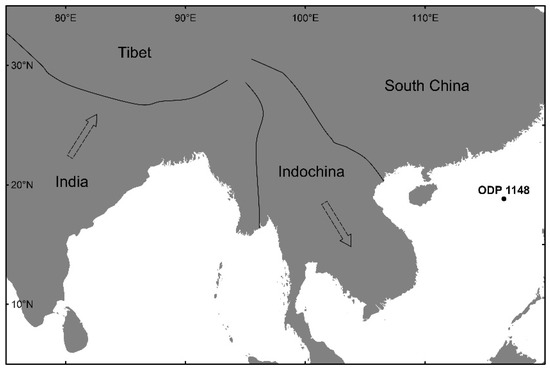 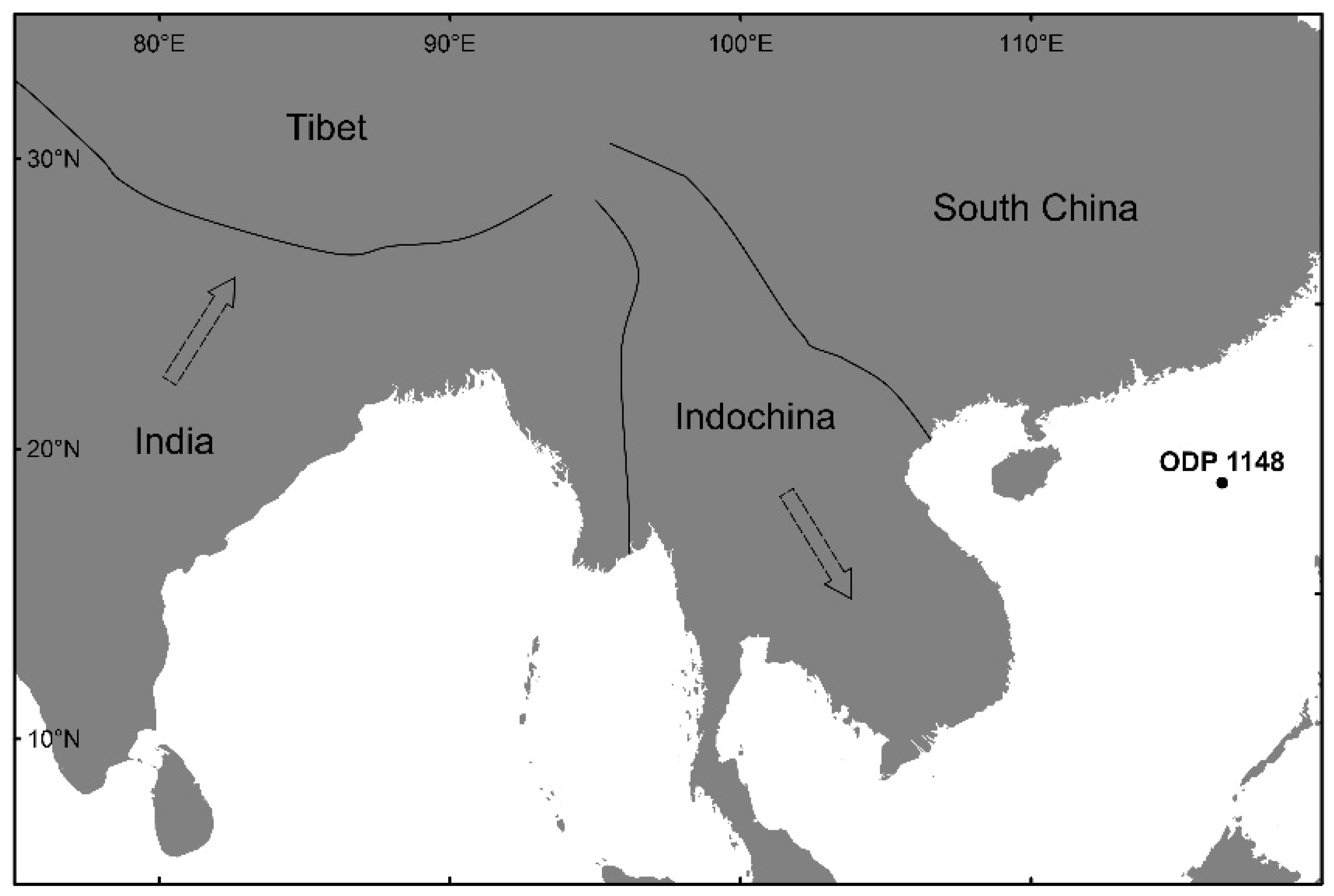 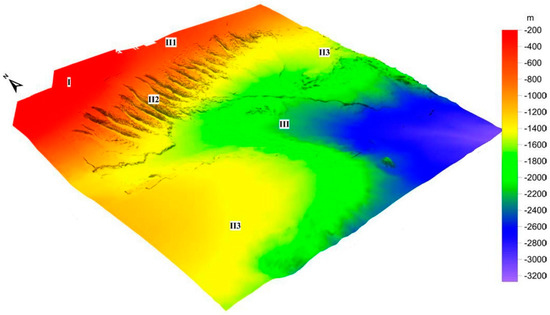