Crombie [1] first observed and identified the distinctive features of sea-echo in radar Doppler spectra. Barrick [2,3] derived expressions for the high frequency (HF) sea-echo Doppler spectrum in terms of the surface current velocities and the ocean wave height directional spectrum. Methods were then developed to interpret radar sea-echo spectra in terms of Barrick’s equations to give surface current velocity maps [4,5], directional ocean wave spectra and wind direction [6,7,8]. These methods are presently used by commercial, operational systems to give current maps and directional wave information.
The first HF radar systems to be developed were phased arrays, which ideally have narrow radar beams [9,10]. Although the interpretation of narrow-beam signals backscattered from the sea is simpler, the disadvantages of phased-array systems for applications are their large physical size with consequent difficult installation requirements and high operating cost. It is mainly for these reasons that compact, transportable systems were developed in the seventies [11], followed by the SeaSonde (Codar Ocean Sensors, Mountain View, CA, USA) [12,13], which has been available commercially since 1990. The SeaSonde has three small antennas, two crossed loops and a vertical monopole/dipole, all aligned along a single vertical axis. Interpretation of the signal voltages using Barrick’s equations yields both the surface current field and directional ocean wave parameters. Lipa and Barrick derived analysis methods for broad-beam HF radars based on equations defining the complex voltage cross spectra in terms of the antenna patterns and the radar cross section; these can be used to obtain the radial current velocity as a function of range and direction [4]. In this paper, we describe how these equations can provide real-time quality control (QC) for radial current velocities derived from the cross spectra. This is based on internal consistency checks that are used to assess the quality of the radial velocities. Analysis procedures presently implemented in SeaSonde system software are based on the multiple signal classification (MUSIC) algorithm for direction-finding [5], which provides reduced analysis time. The solutions for current velocities from MUSIC are consistent with those from the standard least-squares procedure, which is based on equations for the measured voltage cross spectra that can also be used for QC, as described in this paper.
Operational coastal HF ocean surface wave radar networks have proliferated such that regional and national scale operational networks have been installed in the United States [14], Asia [15], Europe [16] and India [17]. The primary products of these networks are surface current maps used for a variety of scientific and operational applications, including field wave measurement [18,19], search and rescue [20], oil spill response [21,22,23,24], vessel navigation [25], fisheries [26], tsunami detection [27]. With the increase in both extent and operational uses of the HF Radar networks, there is now a greater need for more automated QC of the real-time data products.
A recommended best practice for HF radar operators is to measure and use the antenna response pattern for each station’s receive antenna [28]. Kohut et al. [29] showed that applying measured antenna patterns to the HF radar Doppler spectra analysis improved the surface current data accuracy. Methods for measuring the antenna pattern at SeaSonde stations more easily and more often have progressed to include using aerial drones and passing ships of opportunity [30,31,32]. Most SeaSonde HF Radar systems now operate using a measured antenna pattern.
Several QC methods have been developed for use in real-time software processing, as outlined and referenced in manuals issued by the United States Integrated Ocean Observing System (U.S. IOOS) [33]. Recent studies for broad-band radars have demonstrated site-specific methods real-time QC based on area-averaging, SNR limits and MUSIC signal quality metrics [34,35]. QC methods based on SNR limits for phased array radars are described in [36]. The QC method presented here differs from previous methods as it is based on the fundamental equations for the radar sea echo and measured antenna patterns; previous methods are based on analysis of derived parameters and statistical fluctuations of the echo data.
The paper is organized as follows: Section 2 summarizes the radar spectral theory on which the methods are based; Section 3 outlines the method used for the derivation of radial current velocities; Section 4 outlines the method used to provide QC for radial velocities, based on internal consistency checks supplied by software and applied to measured data from a radar system at Shelter Cove; Section 5 shows typical results from application of these methods to radar data from three radar sites located at Trinidad, Big Creek (California) and Sea Bright (New Jersey).

In this paper, we focus the analysis on SeaSonde broad-beam systems [13], which operate at several hundred sites. The basic SeaSonde data set consists of complex voltage cross spectra (see for example [4]) measured by the monopole and two crossed-loop antennas. The radar echo spectra from circular range cells over the coverage area consist of dominant peaks produced by first-order Bragg scatter from waves with one-half the radar wavelength, from which current velocities are derived. The first-order peaks are surrounded by sidebands produced by higher-order scatter, as shown in Figure 1. First-order peaks at positive Doppler frequencies are produced by echo from advancing Bragg waves; those at negative Doppler frequencies come from receding Bragg waves.
Barrick [2] derived the following expression for the narrow-beam first-order radar cross section at radian frequency and azimuthal direction : where is the radar wavenumber, S(k, ) is the directional ocean wave spectrum for angle and wavenumber k, is the radial current velocity and is the radian Bragg frequency defined by , where g is the gravitational constant.
For a broad-beam system, complex voltage cross spectra from the three antennas , where i, j = 1,2,3, at a given frequency can be expressed as follows in terms of the antenna patterns and the radar cross section: where the angular brackets denote infinite ensemble averages, * indicates a complex conjugate and where ( ( are the complex antenna pattern functions for Loops 1 and 2, normalized by the monopole value; is the narrow-beam radar cross section defined by Equation (1); and are the angles at which the radar beam is cut off by the coastline.

Lipa and Barrick [4] described analysis of broad-beam HF radar Doppler echo spectra to give radial current velocities, assuming ideal antenna patterns. It follows from Equation (1) that the Doppler shift from the positive and negative Bragg frequencies uniquely defines a value of the radial current velocity; interpretation of the data using least-squares methods yields the azimuth angles at which this velocity occurs. It is assumed that each radial velocity can occur at either one or two azimuth angles; standard least-squares methods are used to determine the velocity values and choose between a one-angle or a two-angle solution.
This least-squares analysis is here extended to use measured antenna patterns in the interpretation of the radar cross spectra, and a QC method is identified.
Assuming that the velocity defined by a given Doppler frequency occurs at only one or two azimuth angles leads to the following equations, where the first/second entries define a one/two-angle solutions.
In Equation (3), the multiplicative factors have the same values for all the equations.
The normalized least-squares sum S at each frequency is then formed. For a one angle solution, S is given by and the normalized RMS (Root-mean-squared) deviations defined by:
Minimizing S with respect to and provides the optimum fit values, leading to radial current velocities.
We then proceed in a similar fashion for the two-angle solution, minimizing the sum of least-squares deviations to give optimum values of , , , . Statistical methods to select between a one- or a two-angle solution are described in [4] Section IIIB.

In this section, we give examples of the application of the method described in Section 4 to provide QC for radial velocities from three other radar sites. Current velocities shown are obtained from measured radar spectra, unaveraged over time or distance. Figure 6, Figure 7 and Figure 8 show current velocity maps obtained with and without QC. A quantitative measure of the improvement provided by QC is given by the resulting reduction in the normalized RMS deviations, see Equation (5). The average of this quantity over the map is quoted for each case.

This paper summarizes a method for improving the quality of radial velocities from broad-beam sea-echo voltage cross spectra, based on the application of a least-squares direction-finding algorithm. This method provides QC for eliminating poor-quality radar spectral points from the analysis, when the least-squares deviations exceed a preset limit. The method is illustrated using data from a radar at Shelter Cove, California. Results are given from application of this method to data from three additional radar sites, including both long-range and standard-range broad-beam systems.
The next step is to automate the method, which can then run on systems in the field to improve output current velocity data quality. Current velocities shown in this paper are obtained from short-term radar spectra, involving minimal averaging at the spectral level. Further processing involves averaging over time and distance. Resulting current velocities from radar sites with significant interference can be validated by comparison with drifters and in situ devices.
A similar method is currently under development to provide QC for output from directional ocean wave spectra.
The majority of HF radars in operational use for ocean-monitoring employ compact broad-beam antennas; other systems rely on beam-forming. In the future it may be possible to determine a common QC procedure for all ocean-monitoring HF radars, since all output results are based on Barrick’s Equation (1) for the narrow-beam first-order radar cross section.

The authors are involved with the development and sale of SeaSonde systems. 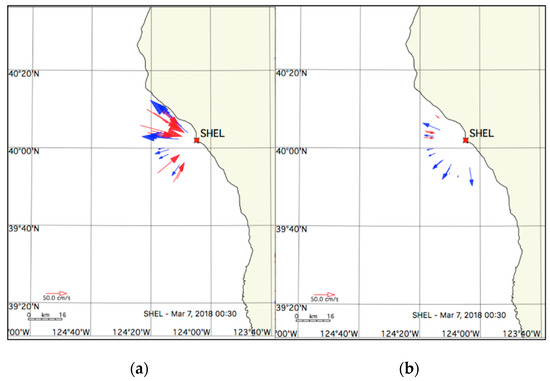 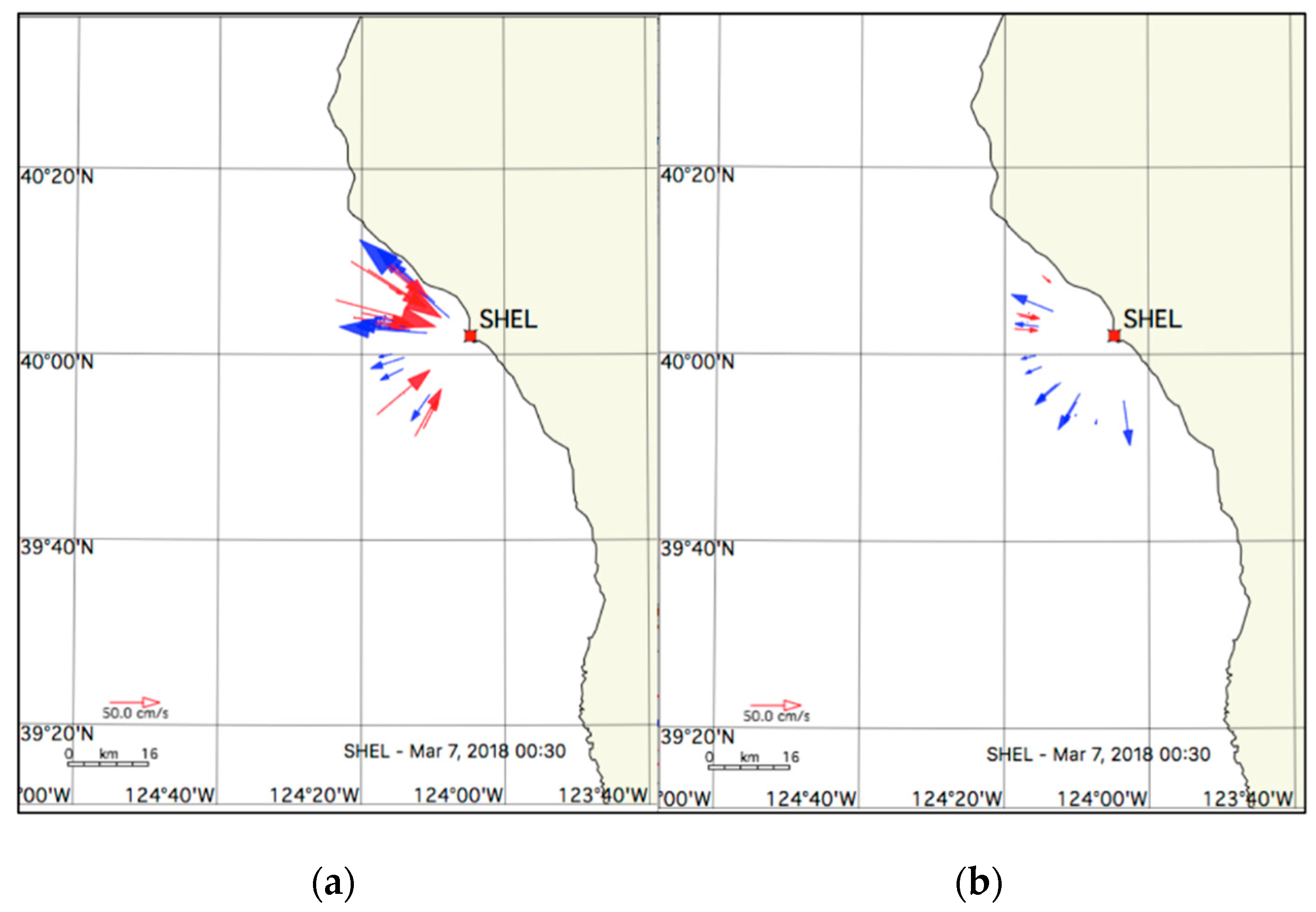 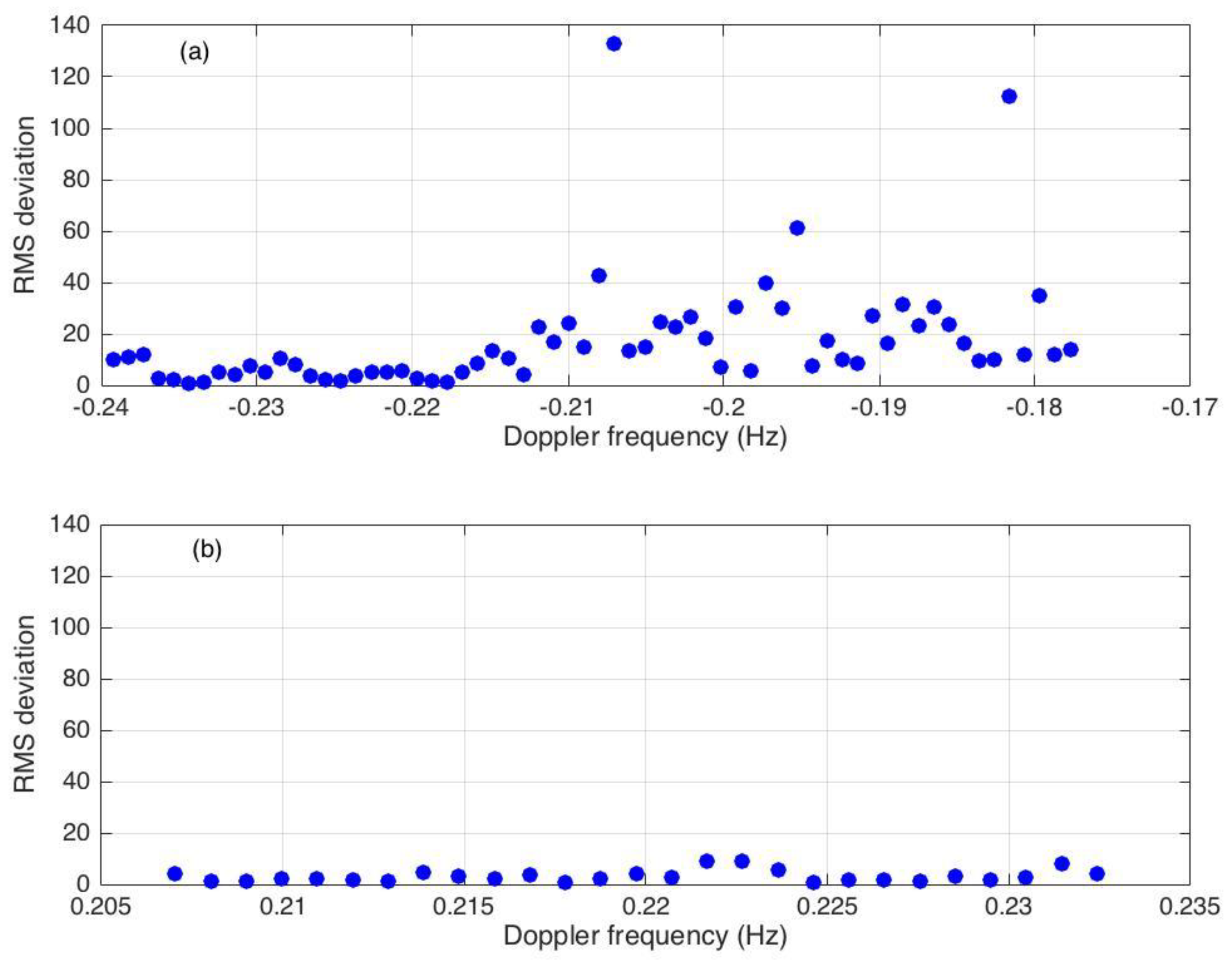 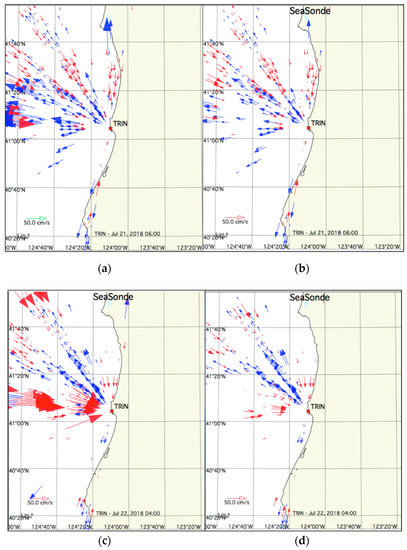 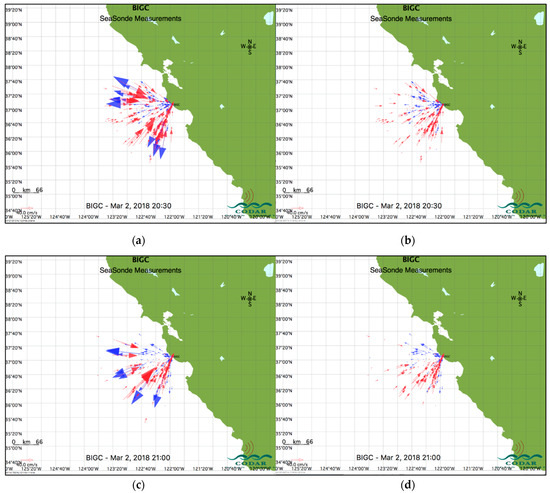 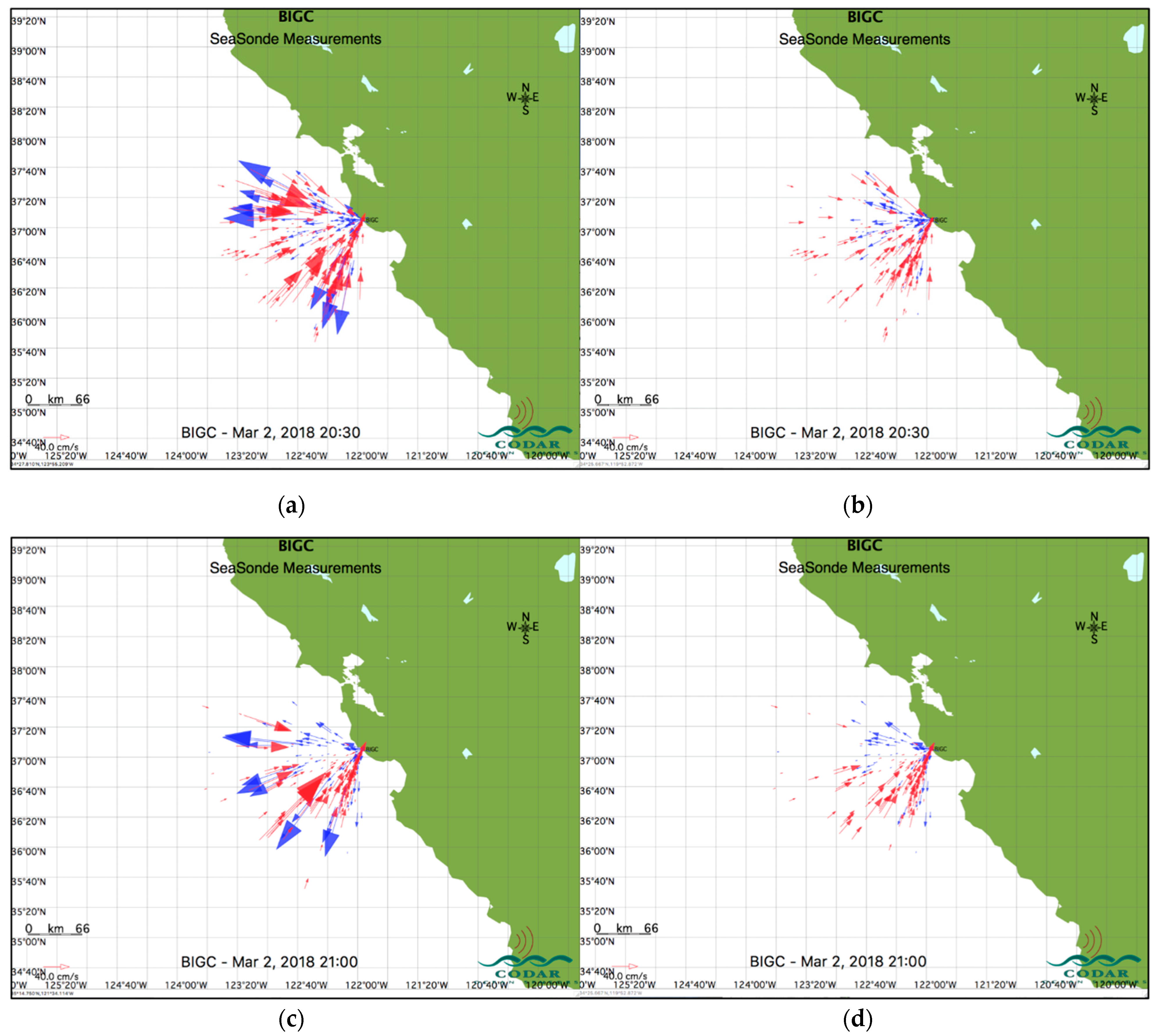