Structure-Borne Wave Radiation by Impact and Vibratory Piling in Offshore Installations: From Sound Prediction to Auditory Damage
Next Article in Special Issue

Large estuaries are especially vulnerable to coastal flooding due to the potential of combined storm surges and riverine flows. Numerical models can support flood prevention and planning for coastal communities. However, while recent advancements in the development of numerical models for storm surge prediction have led to robust and accurate models; an increasing number of parameters and physical processes’ representations are available to modelers and engineers. This study investigates uncertainties associated with the selection of physical parameters or processes involved in storm surge modeling in large estuaries. Specifically, we explored the sensitivity of a hydrodynamic model (ADCIRC) and a coupled wind-wave and circulation model system (ADCIRC + SWAN) to Manning’s n coefficient, wind waves and circulation interaction (wave setup), minimum depth (H0) in the wetting and drying algorithm, and spatially constant horizontal eddy viscosity (ESLM) forced by tides and hurricane winds. Furthermore, sensitivity analysis to Manning’s n coefficient and the interaction of waves and circulation were analyzed by using three different numerical meshes. Manning’s coefficient analysis was divided into waterway (rivers, bay and shore, and open ocean) and overland. Overall, the rivers exhibited a larger sensitivity, and M2 amplitude and maximum water elevations were reduced by 0.20 m and 0.56 m, respectively, by using a high friction value; similarly, high friction reduced maximum water levels up to 0.30 m in overland areas; the wave setup depended on the offshore wave height, angle of breaking, the profile morphology, and the mesh resolution, accounting for up to 0.19 m setup inside the bay; minimum depth analysis showed that H0 = 0.01 added an artificial mass of water in marshes and channels, meanwhile H = 0.1 partially solved this problem; and the eddy viscosity study demonstrated that the ESLM = 40 values reduced up to 0.40 m the peak of the maximum water levels in the upper side of narrow rivers. View Full-Text
Keywords: Chesapeake Bay; ADCIRC; Manning’s n value; wetting and dry; eddy viscosity; wave setup Chesapeake Bay; ADCIRC; Manning’s n value; wetting and dry; eddy viscosity; wave setup
►▼ Show Figures 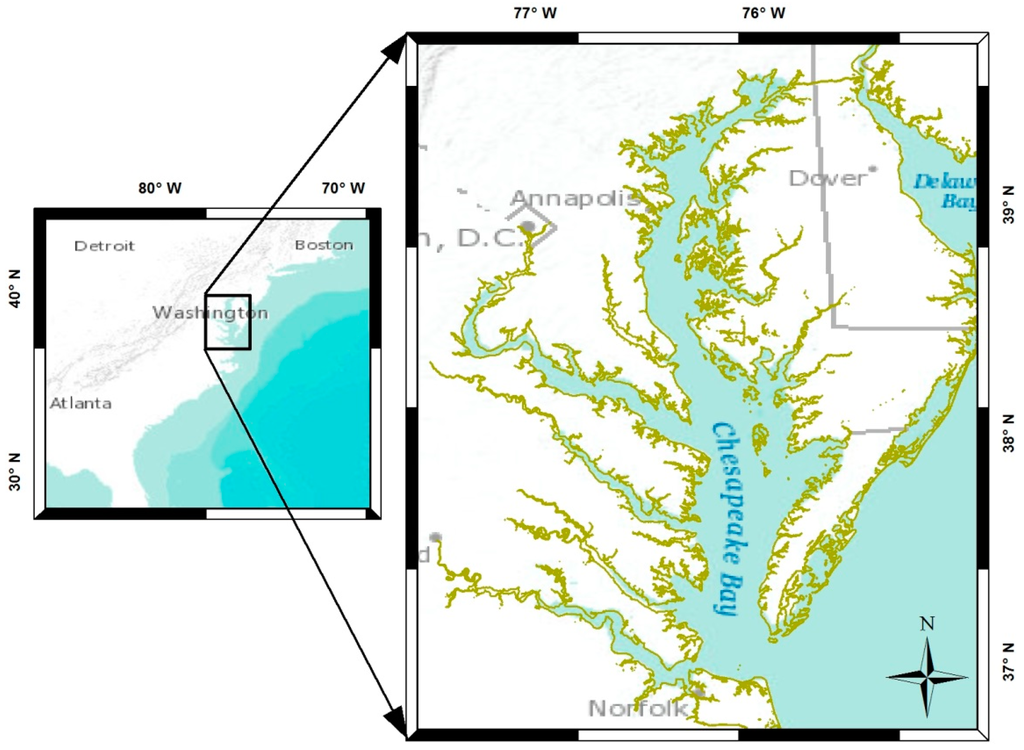