We study the modulation of atmospheric nonisothermality and wind shears on the propagation of seismic tsunami-excited gravity waves by virtue of the vertical wavenumber, m (with its imaginary and real parts, m i and m r , respectively), within a correlated characteristic range of tsunami wave periods in tens of minutes. A generalized dispersion relation of inertio-acoustic-gravity (IAG) waves is obtained by relaxing constraints on Hines’ idealized locally-isothermal, shear-free and rotation-free model to accommodate a realistic atmosphere featured by altitude-dependent nonisothermality (up to 100 K/km) and wind shears (up to 100 m/s per km). The obtained solutions recover all of the known wave modes below the 200-km altitude where dissipative terms are assumed negligible. Results include: (1) nonisothermality and wind shears divide the atmosphere into a sandwich-like structure of five layers within the 200-km altitude in view of the wave growth in amplitudes: Layer I (0–18) km, Layer II (18–87) km, Layer III (87–125) km, Layer IV (125–175) km and Layer V (175–200) km; (2) in Layers I, III and V, the magnitude of m i is smaller than Hines’ imaginary vertical wavenumber ( m i H ), referring to an attenuated growth in the amplitudes of upward propagating waves; on the contrary, in Layers II and IV, the magnitude of m i is larger than that of m i H , providing a pumped growth from Hines’ model; (3) nonisothermality and wind shears enhance m r substantially at an ∼100-km altitude for a tsunami wave period T t s longer than 30 min. While Hines’ model provides that the maximal value of m r 2 is ∼0.05 (1/km 2 ), this magnitude is doubled by the nonisothermal effect and quadrupled by the joint nonisothermal and wind shear effect. The modulations are weaker at altitudes outside 80–140-km heights; (4) nonisothermality and wind shears expand the definition of the observation-defined “damping factor”, β: relative to Hines’ classical wave growth with β = 0 , waves are “damped” from Hines’ result if β > 0 and “pumped” if β < 0 . The polarization of β is determined by the angle θ between the wind velocity and wave vector. View Full-Text
Keywords: seismic tsunami; gravity wave; nonisothermality; wind shears seismic tsunami; gravity wave; nonisothermality; wind shears
►▼ Show Figures 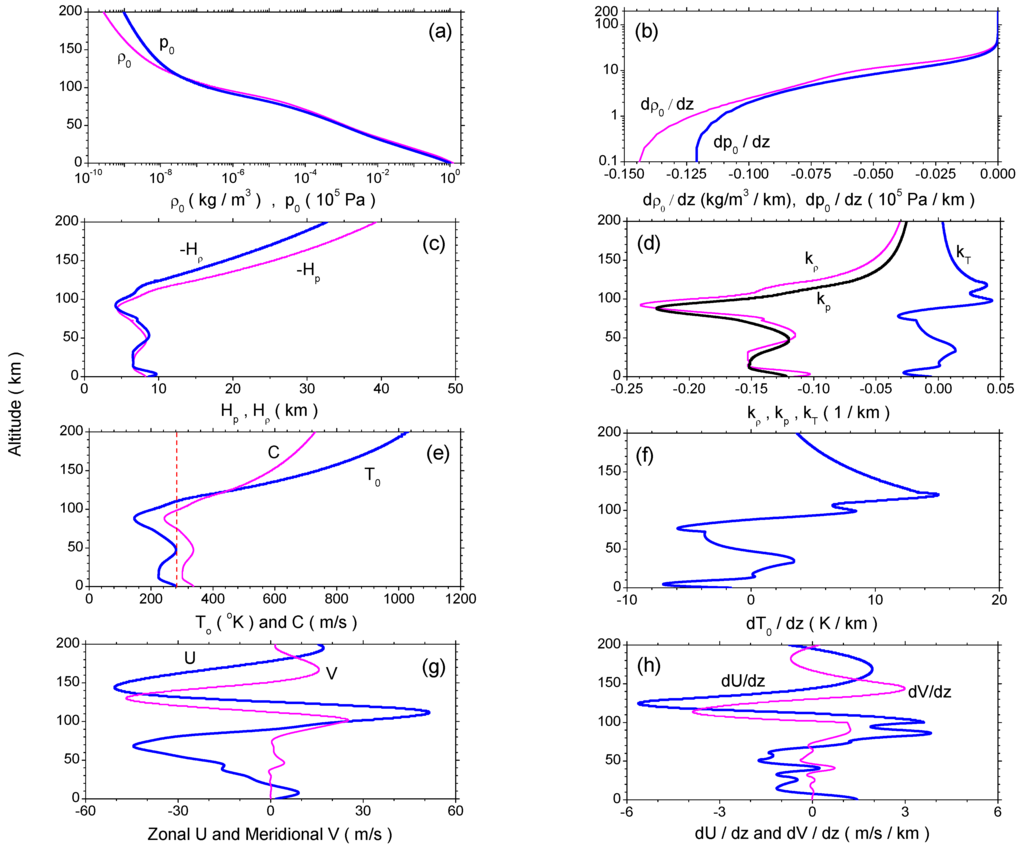 
Ma, John Z.G. 2016. "Modulation of Atmospheric Nonisothermality and Wind Shears on the Propagation of Seismic Tsunami-Excited Gravity Waves" Journal of Marine Science and Engineering 4, no. 1: 4. https://doi.org/10.3390/jmse4010004