Wind-wave contributions to tropical cyclone (TC)-induced extreme sea levels are known to be significant in areas with narrow littoral zones, particularly at oceanic islands. Despite this, little information exists in many of these locations to assess the likelihood of inundation, the relative contribution of wind and wave setup to this inundation, and how it may change with sea level rise (SLR), particularly at scales relevant to coastal infrastructure. In this study, we explore TC-induced extreme sea levels at spatial scales on the order of tens of meters at Apia, the capitol of Samoa, a nation in the tropical South Pacific with typical high-island fringing reef morphology. Ensembles of stochastically generated TCs (based on historical information) are combined with numerical simulations of wind waves, storm-surge, and wave setup to develop high-resolution statistical information on extreme sea levels and local contributions of wind setup and wave setup. The results indicate that storm track and local morphological details lead to local differences in extreme sea levels on the order of 1 m at spatial scales of less than 1 km. Wave setup is the overall largest contributor at most locations; however, wind setup may exceed wave setup in some sheltered bays. When an arbitrary SLR scenario (+1 m) is introduced, overall extreme sea levels are found to modestly decrease relative to SLR, but wave energy near the shoreline greatly increases, consistent with a number of other recent studies. These differences have implications for coastal adaptation strategies. View Full-Text
Keywords: storm surge; coral reefs; waves; sea level; islands; climate; tropical cyclone storm surge; coral reefs; waves; sea level; islands; climate; tropical cyclone
►▼ Show Figures 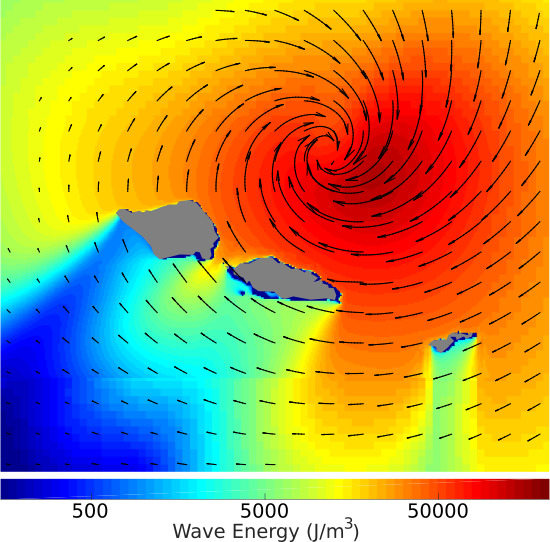