Importance of Agronomic Practice on the Control of Wheat Leaf Diseases

Soil tillage and crop rotation are considered important tools in wheat leaf disease control; however, the results of investigations are inconsistent. The aim of the present study was to determine the effect of the soil tillage system and cropping sequence on the development of winter wheat leaf diseases in 2012–2017. The disease development was assessed in a two-factor experiment: (a) soil tillage system; and (b) crop rotation. Foliar fungicides were used uniformly in all variants. The results showed that tan spot (caused by Pyrenophora tritici-repentis) dominated in 2012, 2013, and 2016, but the level of Septoria tritici blotch (Zymoseptoria tritici) was essentially lower and exceeded the severity of tan spot only in 2015. The agronomic practice used significantly influenced only the development of tan spot. Reduced soil tillage and continuous wheat sowing substantially increased tan spot severity, especially when both practices were used simultaneously. Short crop rotation (only wheat and oilseed rape) provided sufficient control of tan spot in ploughed fields, whereas in non-ploughed fields, the level of this disease did not decrease. The results could be explained by differences in the pathogens’ life cycle: P. tritici-repentis ascospores in wheat debris is the main source of infection; in contrast, Z. tritici spreads by conidia from living plants. View Full-Text
Keywords: reduced soil tillage; crop sequence; Pyrenophora tritici-repentis; Zymoseptoria tritici reduced soil tillage; crop sequence; Pyrenophora tritici-repentis; Zymoseptoria tritici
►▼ Show Figures 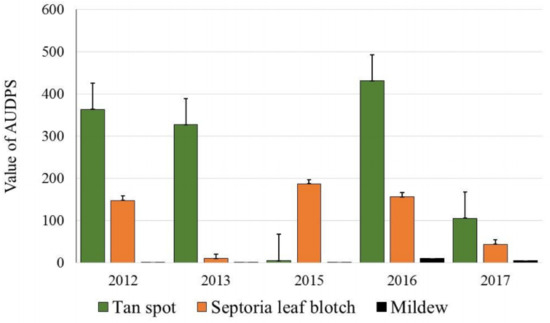