Multi-story cropping systems are used to grow fruits and vegetables in rural homegardens, and it has been argued that they are crucial for the food and nutrition safety of rural populations. They also are considered as refuges for a number of plant species, and as one way to reduce pressure on the surrounding ecosystem by providing resources such as food, fiber, and firewood to farmers on their own farmland. This study was conducted to assess the contribution of fruits and vegetables in homegardens to household livelihoods and biodiversity conservation in the Yayo biosphere reserve in southwestern Ethiopia. The role of fruits and vegetables was evaluated for 96 households that were selected randomly from both fruit and vegetable users and only vegetable-user strata. To collect socioeconomic data, semi-structured interviews, direct observation, and focus group discussions were employed. A complete enumeration of plant species was done for diversity assessment in 48 homegardens from four kebeles (the smallest administrative unit in Ethiopia) in the Yayo and Hurumu districts and analyzed using descriptive statistics, Chi-square, independent t-test, and one-way ANOVA. The results indicated the highest plant diversity, with a total of 76 species identified from 38 families. Fruit and vegetable users were found to harbor more diversity in their homegardens compared to only vegetable-user homegardens. Homegarden size correlated significantly with species richness. Fruits and vegetables in homegardens were found to considerably contribute to household food consumption and total annual income independent of wealth categories. We also found a significant negative relationship between fruit and vegetable use and forest product harvesting, indicating the reduction of pressures on nearby forest ecosystems. This study supports the idea that fruits and vegetables contribute to biodiversity conservation directly as the entity of homegarden agrobiodiversity and indirectly through minimizing households’ demand for forest harvesting by providing food and generating income. Nevertheless, fruits and vegetables were not contributing at their full potential, which was mainly due to disease problems, pests, and a lack of better market access. Therefore, further research and interventions are needed to help farmers confront these challenges affecting fruit and vegetable production and productivity. View Full-Text
Keywords: homegarden; Yayo; Hurumu; species; household; Yayo biosphere homegarden; Yayo; Hurumu; species; household; Yayo biosphere
►▼ Show Figures 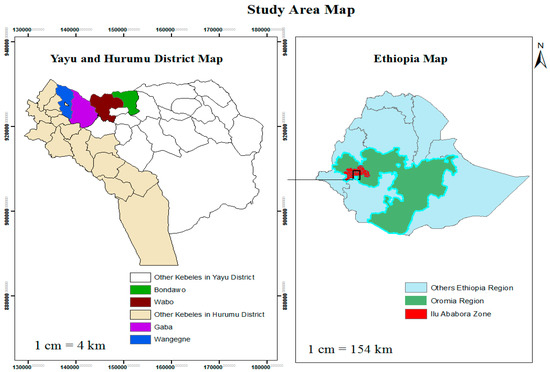 
Mathewos, Melaku, Kitessa Hundera, and Lisa Biber-Freudenberger. 2018. "Planting Fruits and Vegetables in Homegarden as a Way to Improve Livelihoods and Conserve Plant Biodiversity" Agriculture 8, no. 12: 190. https://doi.org/10.3390/agriculture8120190