Interactive Effects of N-, P- and K-Nutrition and Drought Stress on the Development of Maize Seedlings

Global climate change is likely to increase the risk of frequent drought. Maize, as the principal global cereal, is particularly impacted by drought. Nutrient supply may improve plant drought tolerance for better plant establishment during seedling growth stages. Thus, this study investigated the interactive effects of drought and the application of the nutrients N, P and K either individually or in combination. The maize seedlings were harvested between 12 and 20 days after sowing, and the leaf area, shoot fresh and dry weight and root dry weight were determined, and shoot water content and root/shoot dry weight ratio were calculated. Among the N, P and K fertilization treatments applied individually or in combination, the results showed that there was generally a positive effect of combined NPK and/or NP nutrient supply on shoot growth such as leaf area, shoot fresh and dry weight at day 20 after sowing under both well-watered and drought conditions compared with no nutrient supply. Compared with the effect of N and P nutrient supply, it seems that K was not limiting to plant growth due to the mineralogical characteristics of the illitic-chloritic silt loam used, which provided sufficient K, even though soil tests showed a low K nutrient status. Interestingly, the root/shoot ratio remained high and constant under drought regardless of NPK application, while it decreased with NPK applications in the well-watered treatment. This suggests that the higher root/shoot ratios with N, NP, PK and NPK under drought could be exploited as a strategy for stress tolerance in crop plants.
Keywords: drought stress; maize; nitrogen; phosphorus; potassium; root growth; shoot growth drought stress; maize; nitrogen; phosphorus; potassium; root growth; shoot growth

Drought is a primary constraint to global crop production, and global climate change is likely to increase the risk of frequent drought, especially in rain-fed agriculture [1,2]. Maize, as the principal global cereal, is particularly impacted by frequent drought spells. Under drought stress, reduced nutrient availability is one of the most important factors limiting plant growth [3]. Drought reduces nutrient uptake by the roots, in part, because the decline in soil moisture results in a decreased rate of diffusion of nutrients from the soil matrix to the absorbing root surface [3,4,5]. Moreover, nutrient transport from the roots to the shoots is also restricted by reduced transpiration rates and impaired active transport and membrane permeability, together resulting in a reduced root absorbing power by crop plants [6,7]. Thus, nutrient supply strongly affects crop productivity under drought conditions, but this is also very complex [8,9,10]. The positive effects of N and P on plant growth under drought conditions are attributed to an increase in water-use efficiency, stomatal conductance [11,12,13,14], photosynthesis and ATPase activity [5,15], as well as higher cell membrane stability and improved osmotic adjustment [16,17]. However, K increases a plant′s drought tolerance through its functions in stomatal regulation, energy status, charge balance, protein synthesis and homeostasis [18,19,20]. Many physiological mechanisms are involved in the improvement of plant growth through nutrient supply. However, the different studies on the benefit of N, P and K fertilization on plant growth under drought stress are controversial [14,21,22]. Thus, it is necessary to compare the effect of a single nutrient supply, such as N, P and K, and/or combined nutrients on plant growth within the same experiment.
Maize growth is most sensitive to drought during the early growth stages [23,24,25,26,27,28,29,30]. At seedling growth stages, maize growth is characterized by leaf initiation and elongation and by changes in relative root growth maintenance and root architecture [31,32]. Such growth processes react sensitively to drought [31,33,34,35,36]. In addition, the seedling growth stage of maize is highly relevant for P deficiency, since most P-deficiencies in maize are often observed in western Europe at an early growth stage, which has been shown in long-term experimentation [37]. Therefore, it is important to understand how nutrient supply can maintain shoot and root growth, especially during the early growth of plants under drought stress.
The objective of this study was to investigate the interactive effects of different N-, P- and K-nutrition supplementations singly and in combination, as well as the effect of drought stress on shoot and root development of young maize plants, and to understand the different sensitivities of root and shoot growth to drought stress during the early growth stages under different nutrient supplies.

Maize seeds (Zea mays L. cv Issa), pre-germinated for one day in distilled water, were sown in a pot (10.5 cm in diameter and 20 cm tall), containing 1.5 L of silty soil. The wetted soil was mixed thoroughly and allowed to equilibrate for more than two days. Thereafter, the soil was sieved and filled into the pots. To minimize water loss through evaporation, a 2-cm layer of quartz sand (ϕ = 2 mm) covered the soil surface. Four days after sowing, the seedlings were thinned from four to three plants per pot. There were 3 pots per treatment, i.e., all treatments were replicated three times. The properties of the soil are shown in Table 1 [38]. The nitrate, P, K and Mg contents of the soil were determined in NH4-acetate-EDTA extracts before the experiment started (Table 2). For the nutrient treatments, modified Hoagland’s nutrient solution was added to the dry soil to obtain the following: (a) a gravimetric soil water content of 27% and (b) eight nutrient treatments, i.e., no nutrients (control), single nutrient treatments consisting of N, P and K and combined nutrient treatments consisting of NP, NK, PK and NPK. The soil nutrient status in the different treatments is presented in Table 2. The experiment was conducted in a growth chamber with a 12 h photoperiod. The photosynthetic photon flux density (PPFD) was approximately 450 μmol m−2 s−1. The air temperature was 20/18 °C day/night and the relative humidity was maintained at 50–65%.
The soil moisture content in all treatments was maintained at the initial content by adding tap water until day 10 after sowing. Then, the soil water content for the well-watered treatments (half of the pots) was continually maintained at the initial water content by adding tap water daily. The drought treatments for the other half of pots were obtained by drying the soil out without further watering.
During the experiment, pots were weighed daily before watering. The bulk soil water content was determined from gravimetric measurements of the pots (plant weight was estimated and considered in the calculations). At each harvest, the soil water content was determined gravimetrically using soil samples (mixed samples from the whole soil volume). Soil matric potential was calculated using a soil retention curve that was previously established (data not shown) and is presented in Table 3.

2.2. Determination of the Leaf Area, the Shoot and Root Biomass and the Shoot Water Content

2.3. Statistical Analysis of the Data

A randomized complete design was used. The data were analysed by an analysis of variance (ANOVA) using SAS (SAS, Institute Inc., Cary, NC, USA) to test the significance of the main effects. Duncan’s test was applied for the post hoc multiple comparisons within the well-watered or drought treatment. The terms were considered to be significant at nominal p < 0.05.

The results from the analysis of variance (Table 4, Table 5 and Table 6) show that the single and combined nutrient treatments were significant as main effect in the ANOVAs, while the water supply was significant as a main effect for leaf area, whole plant DW, shoot water content, root DW and root/shoot ratio at day 20 after sowing and for shoot FW at days 18 and 20 after sowing. An interaction between nutrient treatments and soil water conditions was found for the shoot water content, root/shoot ratio (p < 0.001) and shoot FW (p < 0.01) at day 20 after sowing (Table 4).

3.2. Interactive Effects of NPK Nutrients and Drought on the Total Plant Dry Weight and Leaf Area of Maize Seedlings

3.3. Interactive Effects of NPK Nutrients and Drought on the Fresh and Dry Weights of the Shoots and the Water Content of the Maize Seedlings

3.4. Interactive Effects of NPK Nutrients and Drought on the Root Dry Weight and Root/Shoot Dry Weight Ratios of the Maize Seedlings

This work was supported by the German Research Foundation (DFG) and the Technical University of Munich (TUM) in the framework of the Open Access Publishing Program. 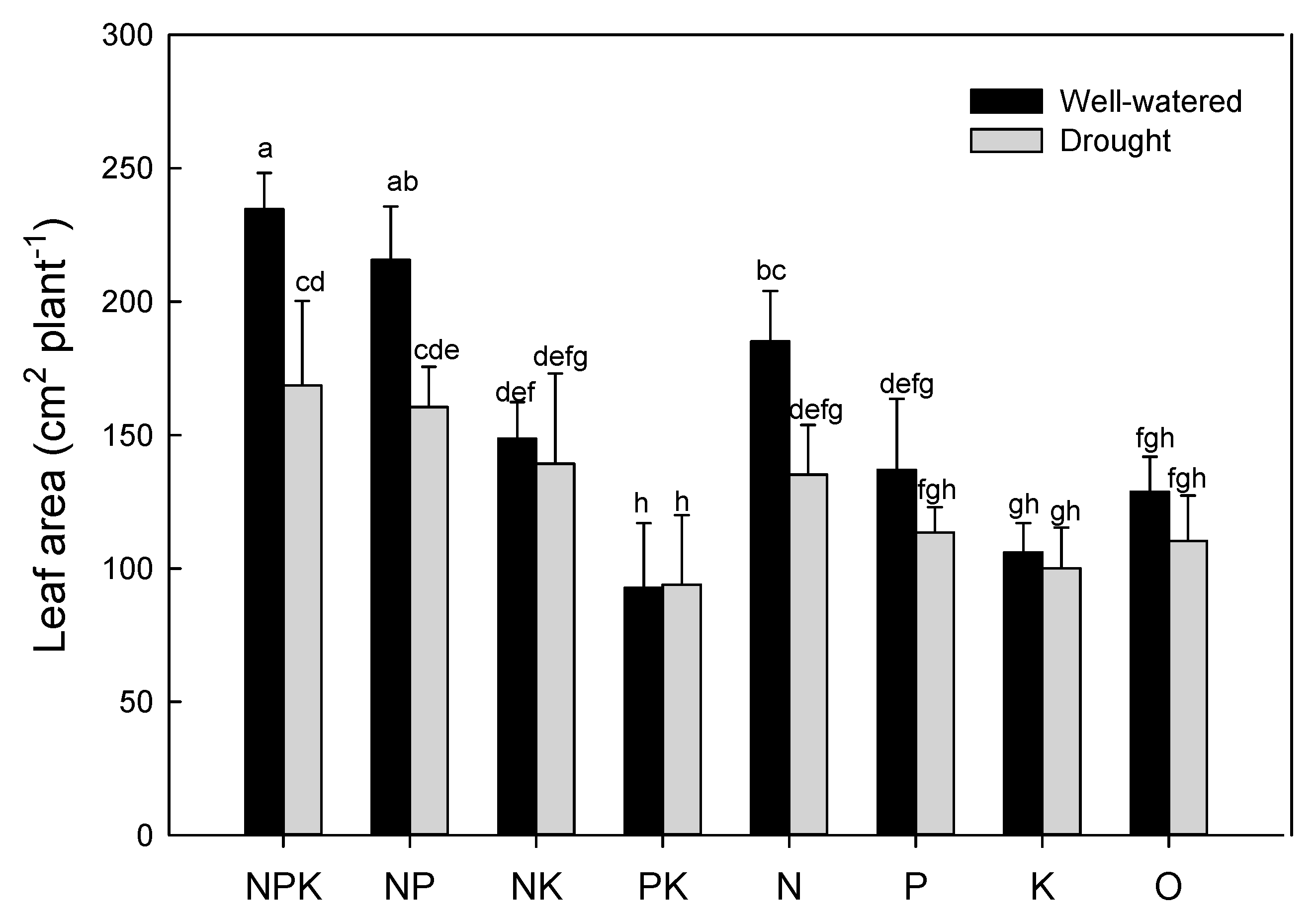 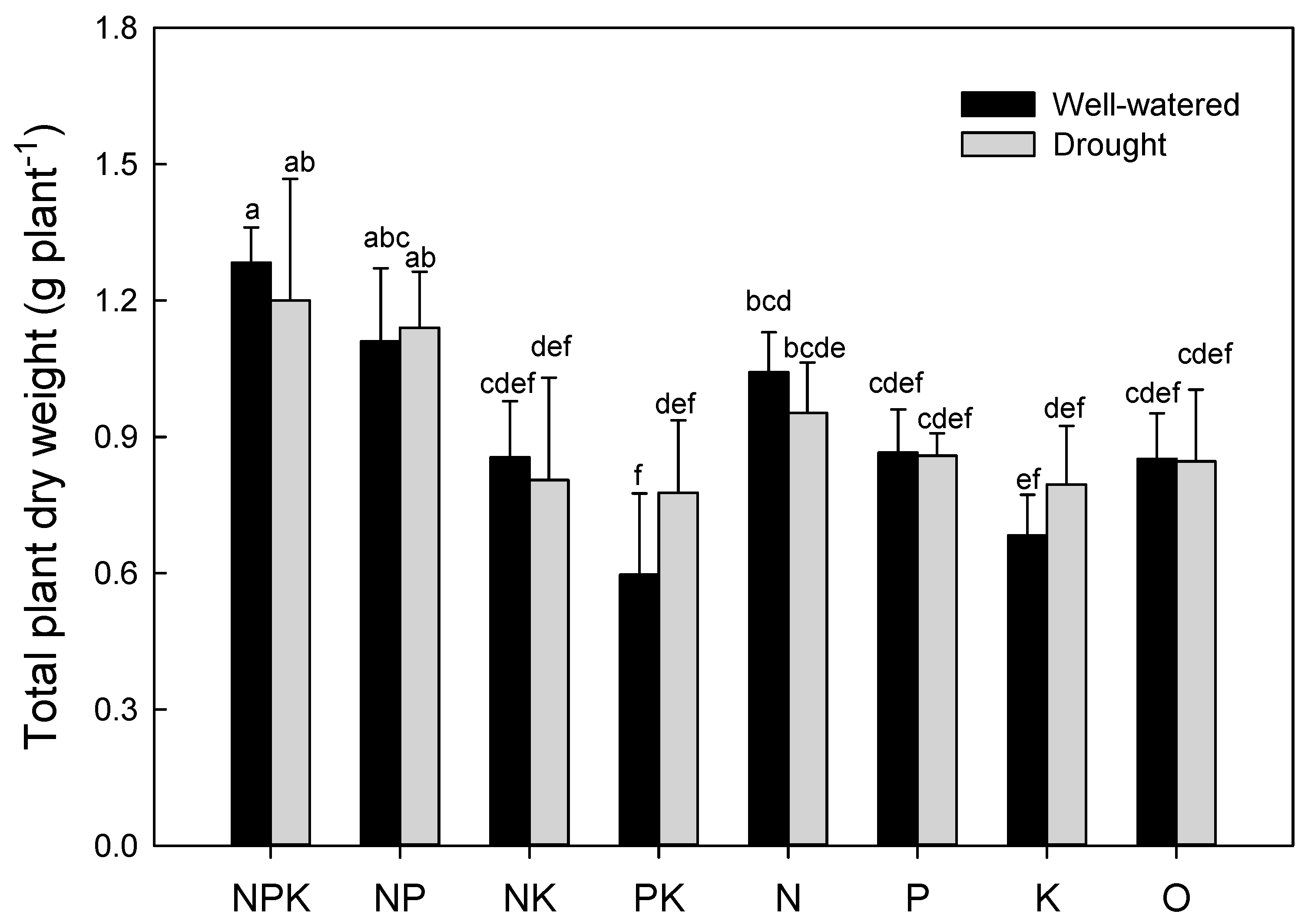 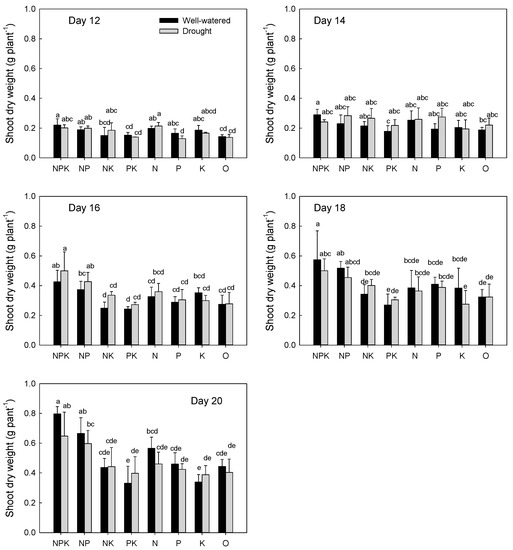 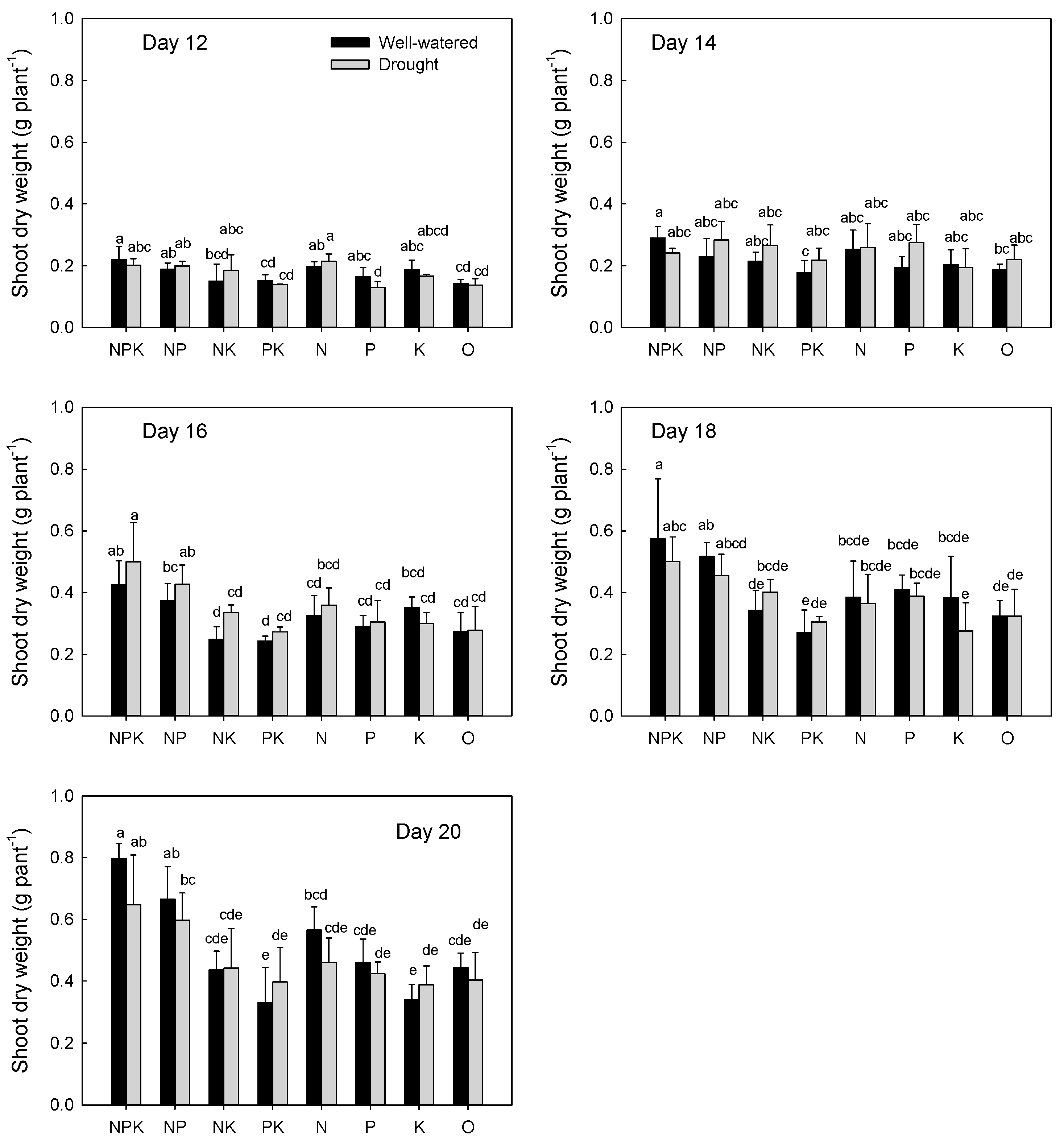 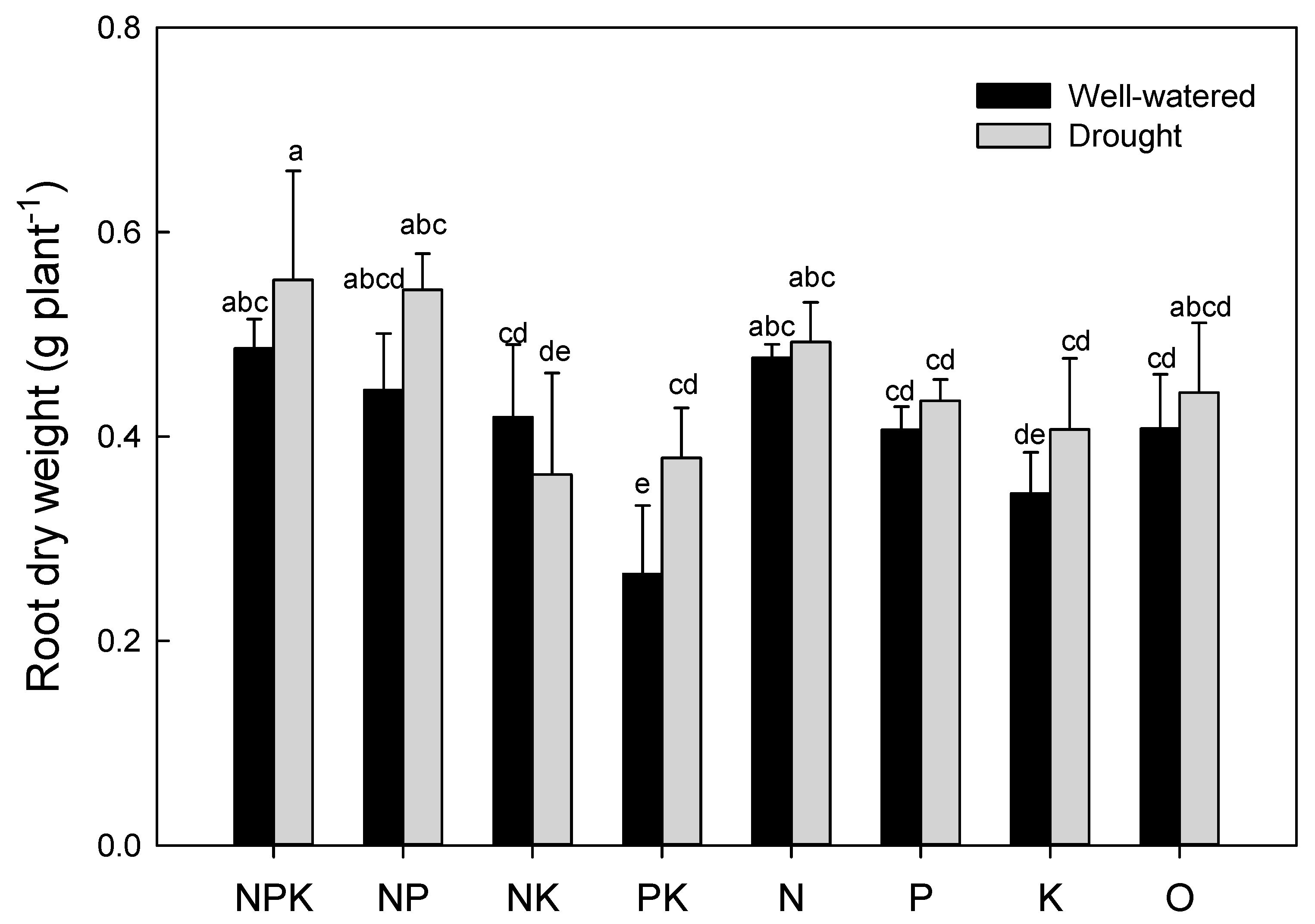