Kiwifruit production has gained great importance in Italy, becoming a strategic crop in several areas. In recent years, the Italian kiwifruit industry has been threatened by the emergence of a new, idiopathic syndrome causing a severe and rapid decline, leading to vine collapse within two years from symptom development. The main symptoms associated to this syndrome are the disappearance of feeding roots, blocking of both stele and xylem vessels, root cortex breakdown, leaf necrosis, phylloptosis, twig wilting and plant death. Kiwifruit decline affects both Actinidia chinensis var. chinensis and A. chinensis var. deliciosa. Due to the similarity with other fruit trees idiopathic diseases, such as the rapid apple decline, we propose to name this disorder as kiwifruit vine decline syndrome (KVDS). The causes of KVDS are still unknown. However, KVDS is prevalent in soils affected by waterlogging or poor aeration, suggesting a physiological origin of this disorder. In addition, our experiments suggested a role of the rhizosphere microbial community, since healthy and KVDS-affected plants show distinct bacterial and fungal communities. Phytophthora spp. and Phytopythium spp. were more frequent in symptomatic plants (58.6%) than in asymptomatic ones (19%). Moreover, Desarmillaria tabescens were found only on symptomatic plants. Inoculation of potted kiwifruit vines with those pathogens resulted in KVDS symptom development. Finally, induced waterlogging conditions increased the incidence of pathogen isolation, but not the symptom development. View Full-Text
Keywords: root fungi; Phytopythium spp.; moria; waterlogging; Phytophthora spp.; Armillaria spp.; rhizosphere root fungi; Phytopythium spp.; moria; waterlogging; Phytophthora spp.; Armillaria spp.; rhizosphere
►▼ Show Figures 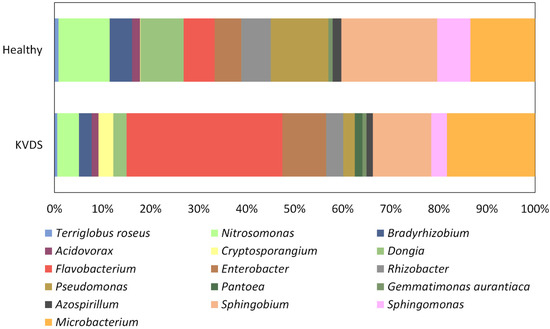