The toxicity of high concentrations of sodium chloride creates significant difficulties in realizing the productivity potential of wheat. The development of effective test systems for the identification and selection of resistant genotypes is an urgent task given the global increase in soil salinity in agricultural land. To identify the characteristics of the plant’s reaction to the toxic effect of sodium chloride, wheat genotypes with different resistance to ionic toxicity (the Orenburgskaya 10 and Orenburgskaya 22 varieties) were used. In model experiments, we used fluorescence, light-optical and electron microscopy to characterize the structural and functional features of the cells of the roots of wheat seedlings, and cytological markers suitable for creating a test system for the early diagnosis of the sensitivity of wheat genotypes to sodium chloride were established. The response of the plants to the effects of sodium chloride was assessed by changes in biometric data, respiration rate, peculiarities in the accumulation of reactive oxygen species (ROS) and mitochondrial staining, and the quantitative assessment of coleoptile cell viability as putative sensitivity markers. In the sodium chloride-sensitive genotype (Orenburgskaya 10), toxic effects resulted in oxidative damage in the root cells, while in the resistant genotype (Orenburgskaya 22), oxidative damage to the cells was minimal. A high level of expression of mitochondrial superoxide dismutase (MnSOD) was found in the roots of the Orenburgskaya 22 variety. The identification and functional analysis of cytological and molecular markers provide the basis for further studies of the resistance of wheat to sodium chloride stress. View Full-Text
Keywords: NaCl; mitochondria; salt tolerance; morphology; Triticum durum Desf.; Triticum aevistium host.; ROS; MnSOD NaCl; mitochondria; salt tolerance; morphology; Triticum durum Desf.; Triticum aevistium host.; ROS; MnSOD
►▼ Show Figures 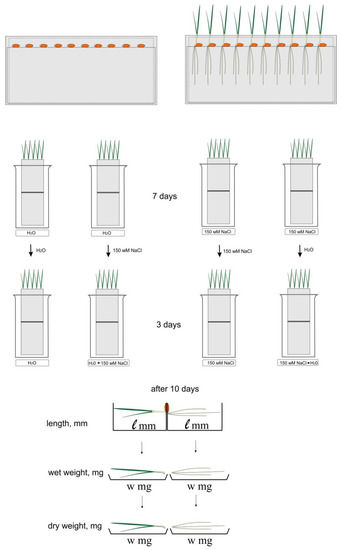