The Effect of Foliar and Soil Application of Flufenacet and Prosulfocarb on Italian Ryegrass (Lolium multiflorum L.) Control
Previous Article in Journal

:
Dicamba is a herbicide with a moderate volatility profile. Such volatility behavior can be significantly diminished with formulation technology and volatilization reducers. The objective of this study was to quantify the volatility potential of dicamba diglycolamine salt (DGA) in a standalone application or in tank mixture with glyphosate (potassium salt) (GK), with and without volatilization reducer (acetic acid—VaporGrip®) from different surfaces. The combination of these products was applied on four different surfaces (glass slides, corn straw, and dry and moist sandy soil) with three replications, and the experiment was duplicated. The application was performed indoors with an automated sprayer. After application, targets were positioned in cartridges containing two filters in series. Cartridges were placed in a vapor collection system that consisted of a chromatographic oven with constant temperature of 40 °C attached to a vacuum pump for 24 h. After this period, liquid samples were obtained from an extraction procedure of filters and surfaces, which corresponded to the volatilized and deposited portions of the herbicides, respectively. The samples were analyzed by liquid chromatography–tandem mass spectrometry (LC-MS/MS). The use of this method provided a rapid and consistent evaluation, in which the treated surface exerts a direct influence on the amount of volatilized dicamba. The mixture of dicamba and glyphosate solutions exhibited different volatility profiles as a function of the treated surfaces. The DGA applied alone had the largest level of volatility when applied on moist soil and the lowest level of volatility in dry soil and straw. The DGA with GK had volatilities similar in dry soil, wet soil and straw. The volatility reducer in the tank mixture was effective in reducing DGA dicamba volatilization, regardless of the sprayed surface and the tank mixture, making the application of dicamba safer from the volatilization standpoint.
Keywords:
diglycolamine salt (DGA); vapor; adjuvants; soil; straw

The herbicide dicamba (3,6-dichloro-2-methoxybenzoic acid) belongs to the benzoic acid chemical group, and is a synthetic auxin [1]. This postemergence herbicide has been used for a long time to control broadleaf weeds in winter cereals and in pastures in several countries around the globe. However, in recent years, a biotech trait has been introduced to allow the postemergence application of dicamba on soybean, corn and cotton. The Brazilian regulatory agency (CTNBio) has de-regulated dicamba-resistant soybean, corn and cotton in recent years [2,3]. The commercialization in Brazil of such crop trait products is planned to start in the 2021/2022 season. The introduction of such technology will serve as an important tool to sustainably manage herbicide-resistant weeds, and to protect the technology and selective herbicide chemistry currently available in the Brazilian market.
Since dicamba is a compound classified as moderately volatile, injuries after dicamba applications have been reported in nonresistant and nontarget plants [4,5]. Dicamba is a weak acid (pKa 1.87) that is formulated as a salt The acid form is the volatile form [6,7,8] and the molecular state (whether protonated or deprotonated) may have a substantial impact on volatility [8,9]. For transgenic crops resistant to dicamba, new formulations with reduced volatility have been developed. Previous researchers have shown significant reductions in volatility for dicamba diglycolamine salt (DGA) when compared to dimethylamine (DMA) salt [9]. In addition, a volatility reducer (VG) (acetic acid—VaporGrip®) was also developed to further decrease the volatility profile of dicamba [10], by scavenging free protons in the dicamba spray solution [11]. The volatility of DGA dicamba is much lower than that of the DMA dicamba formulation, and VG technology further reduces volatility when present in the DGA formulation [7]. However, there is no information in the literature on the use of the VG technology in a tank mix as compared to being part of the formulation itself.
Although the volatility of different dicamba salts in soybean and cotton has been previously investigated [4,9,12,13,14,15], few studies have evaluated the effect of different surfaces, such as soil, straw or inert materials. The amount of volatilized dicamba varies according to the characteristics of the surface onto which the spray droplets are deposited [16]. The application of DMA dicamba on corn and soybean increased dicamba volatilization by 35% compared to the same product applied on silt loam soil [8]. With the increased adoption of the no-till system in soybean, corn and cotton, and the double-crop system in the Cerrado region of Brazil (soybean/corn), a significant part of the applied dicamba will be deposited in the corn residue (straw). No-till crop production systems in Brazil occupy around 33 million hectares, and continue to expand [17], and the interaction of the herbicide with the surface of the straw cover is different from with the soil or leaf surface [18].
Dicamba is often applied in combination with glyphosate in tank mixtures to increase the efficacy or broaden the spectrum of weed control. Under controlled conditions, Mueller and Steckler [9] evaluated the application of (1) DGA dicamba + glyphosate (potassium salt), (2) DGA + glyphosate + VG, and (3) DGA + VG in sandy soil at different temperatures. The authors observed that the volatilization of DGA + glyphosate and DGA + glyphosate + VG was higher than that of DGA + VG in all tested temperatures, indicating that the use of glyphosate in the mixture will likely increase overall dicamba volatilization. Thus, our hypotheses for the present study were that (1) the volatilization profile of DGA dicamba (alone or in mixture with glyphosate) changes according to the treated surface, and (2) the volatilization reducer (acetic acid—VaporGrip®) alters the overall volatility profile of DGA dicamba. The objective of this study was to quantify the volatilization of standalone DGA dicamba or in mixture with glyphosate (potassium salt), with and without the volatilization reducer (acetic acid—VaporGrip®) from different surfaces.

This research was funded by Bayer CropScience.

The authors are grateful to Bayer Cropsciences for funding and José Roberto Marques Silva for his support in chemical analysis. 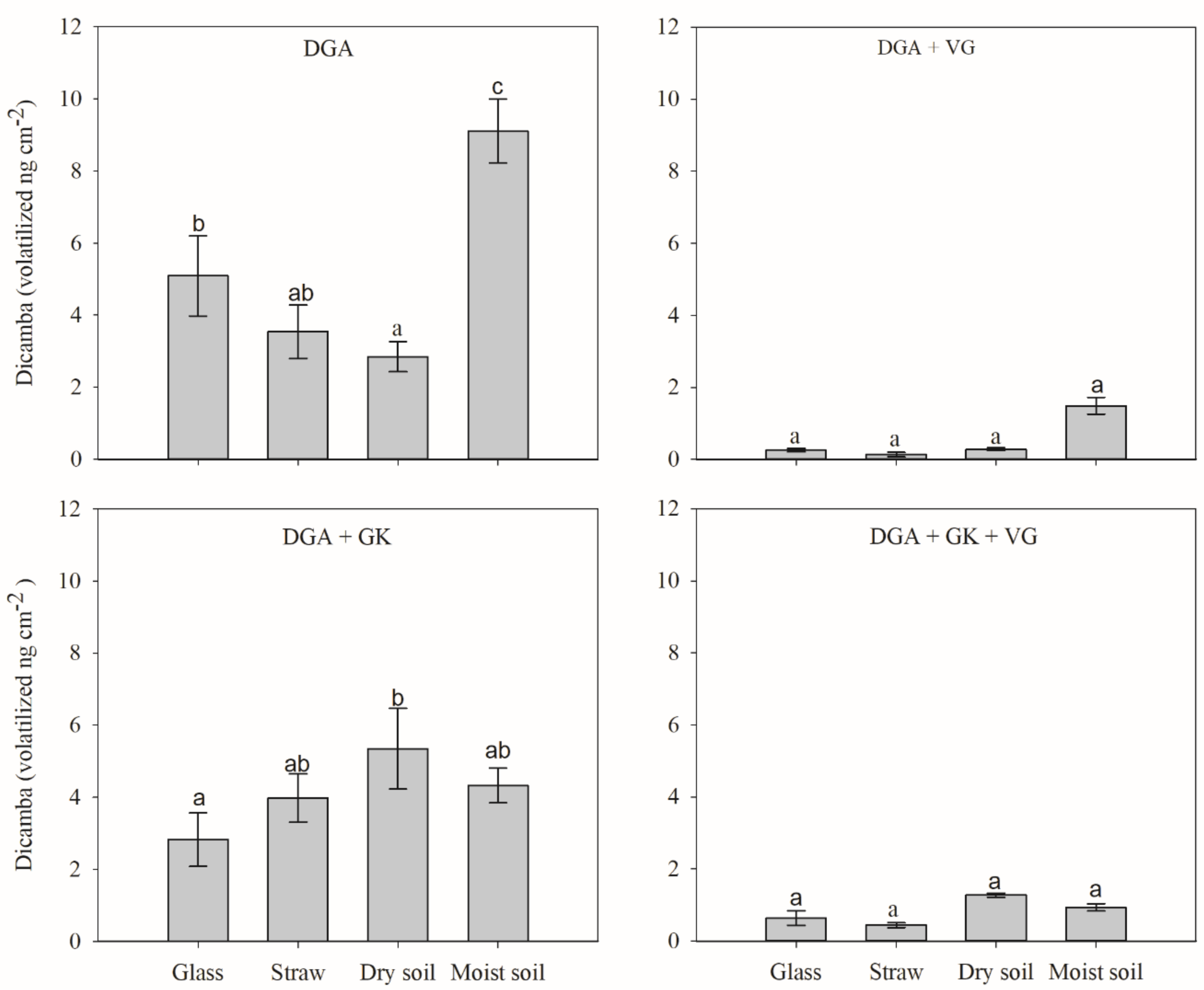