Altered Metabolome of Lipids and Amino Acids Species: A Source of Early Signature Biomarkers of T2DM

Sodium–glucose co-transporter type 2 inhibitors (SGLT-2is) are a class of antihyperglycemic drugs that reduce tubular reabsorption of filtered glucose, inducing urinary glucose excretion (UGE) [1]. Glucosuria causes a decrease in fasting and postprandial plasma glucose and promotes weight and fat mass reductions secondary to calorie loss through urine. Blocking tubular glucose reabsorption facilitates its exchange by uric acid through human glucose transporter 9 (GLUT-9), inducing uricosuria and reduction of uricemia. In addition, sodium–glucose co-transporter type 2 SGLT-2 inhibition leads to natriuresis and mild osmotic diuresis, which contributes to a significant decrease in systolic and diastolic blood pressure (BP) [2].
Four SGLT-2is (dapagliflozin, empagliflozin, canagliflozin, and ertugliflozin) have been marketed in the European Union so far. In patients with T2DM, these drugs induce a UGE ranging between 60 to 80 g per day, although greater levels of glucosuria (above 110 g/day) have been observed with high doses of canagliflozin [3]. Unlike other SGLT2-is, which show a high specificity for SGLT-2, canagliflozin 300 mg (CANA300) induces a transient inhibition of the sodium–glucose co-transporter type 1 (SGLT-1) in the intestine, which reduces postprandial blood glucose and stimulates distal secretion of glucagon-like peptide-1 (GLP-1) and peptide tyrosine tyrosine (PYY), probably as a result of intraluminal glucose metabolism by the gut microbiome to short-chain fatty acids, which subsequently stimulates L cell secretion [4,5,6].
In randomized clinical trials (RCTs) conducted in patients with type 2 diabetes (T2DM), SGLT-2is have shown superiority or at least non-inferiority in glycemic control compared to other oral glucose-lowering drugs (GLDs), achieving greater weight loss (WL) and BP reduction [7,8,9,10,11,12,13,14]. The incidence of hypoglycemia with SGLT-2is was similar to that observed with placebo. In addition to these glycemic and metabolic improvements, SGLT-2is have demonstrated cardiovascular (CV) and renal benefits in patients with T2DM and high cardiovascular (CV) risk or chronic kidney disease (CKD) [15,16,17,18,19].
RCTs with canagliflozin have shown a dose–response relationship with glycated hemoglobin (HbA1c) and WL, with doses ranging from 50 to 300 mg per day [20]. However, to date, no head-to-head RCTs comparing different SGLT-2is in patients with T2DM have been reported. A network meta-analysis performing indirect comparisons from phase 3 RCTs of each drug showed that CANA300 induced greater reductions in HbA1c, weight, and systolic BP than dapagliflozin or empagliflozin, although these differences were modest [21]. A higher effect on UGE and postprandial glycemia could explain the better results seen with CANA300.
While RCTs remain the gold standard for drug approval, real-world studies (RWS), although statistically less rigorous, can provide valuable insight into how GLDs perform within specific subgroups often excluded in RCTs. RWS are also useful for evaluating hard outcomes, long-term effectiveness, and safety [22]. Two types of RWS with SGLT-2is have been published: studies focusing on mortality, CV outcomes, and safety, generally conducted on large national or insurance company databases; and smaller classic cohort studies focusing on effectiveness and safety.
The first group of publications attempts to mimic the randomization of clinical trials through propensity score matching, which compares new SGLT-2i users with matched new users of other GLDs [23,24,25,26,27,28]. This kind of retrospective studies provides baseline patients’ characteristics and final hard outcomes, but drug effectiveness or medical interventions during the follow-up are normally not reported. These reports have confirmed, in a broader population of patients, the CV and renal benefits shown previously by SGLT-2is in RCTs.
The second group of RWS includes classic cohort studies, whose objective is to assess the effectiveness and safety of the SGLT-2is. These publications contain detailed information on patient characteristics, prescription orders, laboratory results, adverse effects (AEs), and withdrawals (WDs). We have identified several of these studies with canagliflozin, most of which are retrospective [29,30,31], except the Canadian Canagliflozin Registry, which was a national prospective study [32]. In all these reports, real-life effectiveness with both doses of canagliflozin (100 and 300 mg) was similar to those seen in RCTs.
Even though CANA300 seems to be more efficacious than canagliflozin 100 mg (CANA100) and other gliflozins, to date no RCTs or RWS have evaluated the strategy of intensification of SGLT-2i therapy by switching to CANA300, either from CANA100 or other SGLT-2is. The aims of this multicentric retrospective study, Real-World Evidence with Canagliflozin (Real-WECAN), were to assess in a real-world setting the effectiveness and safety of CANA100 daily as an add-on to the background antihyperglycemic therapy and to evaluate the intensification of SGLT-2i therapy by switching to CANA300 daily in patients with T2DM.

We conducted an observational, retrospective, multicenter study of two cohorts of adult patients with T2DM from 5 tertiary hospitals in the region of Madrid (Spain). A first cohort of SGLT2i-naïve patients who were initiated on CANA100 and a second cohort of patients with prior background SGLT-2i therapy who switched to CANA300 were identified in electronic medical records from the Departments of Endocrinology. The patients were consecutively selected from the diabetes clinic databases between May 2015 and July 2019 if they were older than 18 years, were diagnosed with T2DM according to the American Diabetes Association criteria, had received initial and regular follow-up diabetes care by endocrinologists in the diabetes clinic, started treatment with CANA100 or CANA300 as a part of their diabetes care at least 6 months before the data collection, and received at least 1 dose of the drug. Treatment decisions were in accordance with clinical practice and at the discretion of the treating physician. Switching to CANA300 was indicated in patients with suboptimal HbA1c or weight response to prior SGLT-2is. All patients were de-identified through assignment of unique patient study numbers to ensure confidentiality. Patients were followed until they discontinued therapy, died, or reached the end of the follow-up period. Discontinuation was defined as a period of at least 120 days without taking the medication. Participants who interrupted the drug at least once for ≥7 days but restarted it within the follow-up period were allocated to the interrupters group. Exclusion criteria were diagnosis of type 1 diabetes; missing data on HbA1c and weight at baseline or at the end of the follow-up; uncontrolled medical disease; and treatment with drugs that may induce impaired glycemic control (corticosteroids, immunosuppressants, somatostatin analogues, etc.).

Demographic, clinical, and laboratory data were extracted from electronic medical records by the investigators in each center, defining 3 data capture visits: V1, baseline (CANA100) or switch (CANA300); V2, 6 ± 2 months after the start of CANA100 or after switching to CANA300; and V3, last visit of the follow-up period. Electronic databases from primary care, laboratory departments, and emergency departments were also reviewed to collect unreported AEs.
Baseline clinical parameters included gender, age, duration of T2DM, microvascular and macrovascular complications, other CV risk factors (hypertension, hypercholesterolemia, hypertriglyceridemia, smoking), heart failure, arrhythmias, obstructive sleep apnea and background GLDs, and antihypertensive and lipid-lowering drugs. In the cohort of patients switching from other SGLT-2is to CANA300, clinical parameters before initiating the prior SGLT-2i were also registered. HbA1c, fasting plasma glucose (FPG), weight, BMI, systolic and diastolic BP (SBP and DBP), heart rate (HR), lipid profile, serum uric acid, hepatic serum biomarkers (alanine transaminase (ALT), aspartate aminotransferase (AST), gamma-glutamyl transferase (GGT), hematocrit, estimated glomerular filtrate rate (eGFR) using the Chronic Kidney Disease Epidemiology Collaboration equation, and microalbuminuria were collected at V1, V2, and V3. Echocardiographic data were recorded at baseline and over the follow-up in those cases where they were available. Causes of WDs and deaths were registered. AEs associated in clinical trials to SGLT-2is (genital mycotic infections (GMIs), urinary tract infections (UTIs), fractures, polycythemia, volume depletion, diabetic ketoacidosis (DKA), atraumatic lower extremity amputations) were collected by the investigators at each visit. GMIs and UTIs were diagnosed in those patients with positive cultures or patients reporting genital or urinary symptoms who received antifungal agents or antibiotics. Polycythemia was defined as increased hematocrit higher than 49% in men or higher than 48% in women. AEs related to volume depletion were diagnosed in patients with admissions in hospitals or emergency departments due to episodes of postural dizziness, hypotension, dehydration, or falls. DKA was defined as an anion-gap acidosis with increased plasma or urine ketones, even in the presence of normoglycemia. Hypoglycemia episodes were defined as biochemically documented (≤70 mg/dL) and severe hypoglycemia episodes, such as those requiring the assistance of another individual or resulting in seizure or loss of consciousness.
The main outcome measure was to assess changes in HbA1c at V2 and V3 from V1 in both cohorts of CANA100 and CANA300. Secondary outcomes were changes in weight, BP, lipid profile, serum uric acid, liver function tests, hematocrit, eGFR, and microalbuminuria.

J.J.G.-M., M.A.G.-F., A.G.S.-P., T.A.-B., M.B.-S. and J.W.-C. participated in the design, data collection, data interpretation, and critical review of the article. J.J.G.-M. performed the statistical analysis and wrote the manuscript. All authors have read and agreed to the published version of the manuscript.

No part of the submitted work has been published or is under consideration for publication elsewhere. Part of this research was accepted as a poster presentation at the American Diabetes Association’s 80th Scientific Sessions, June 12–16, Chicago, Illinois. 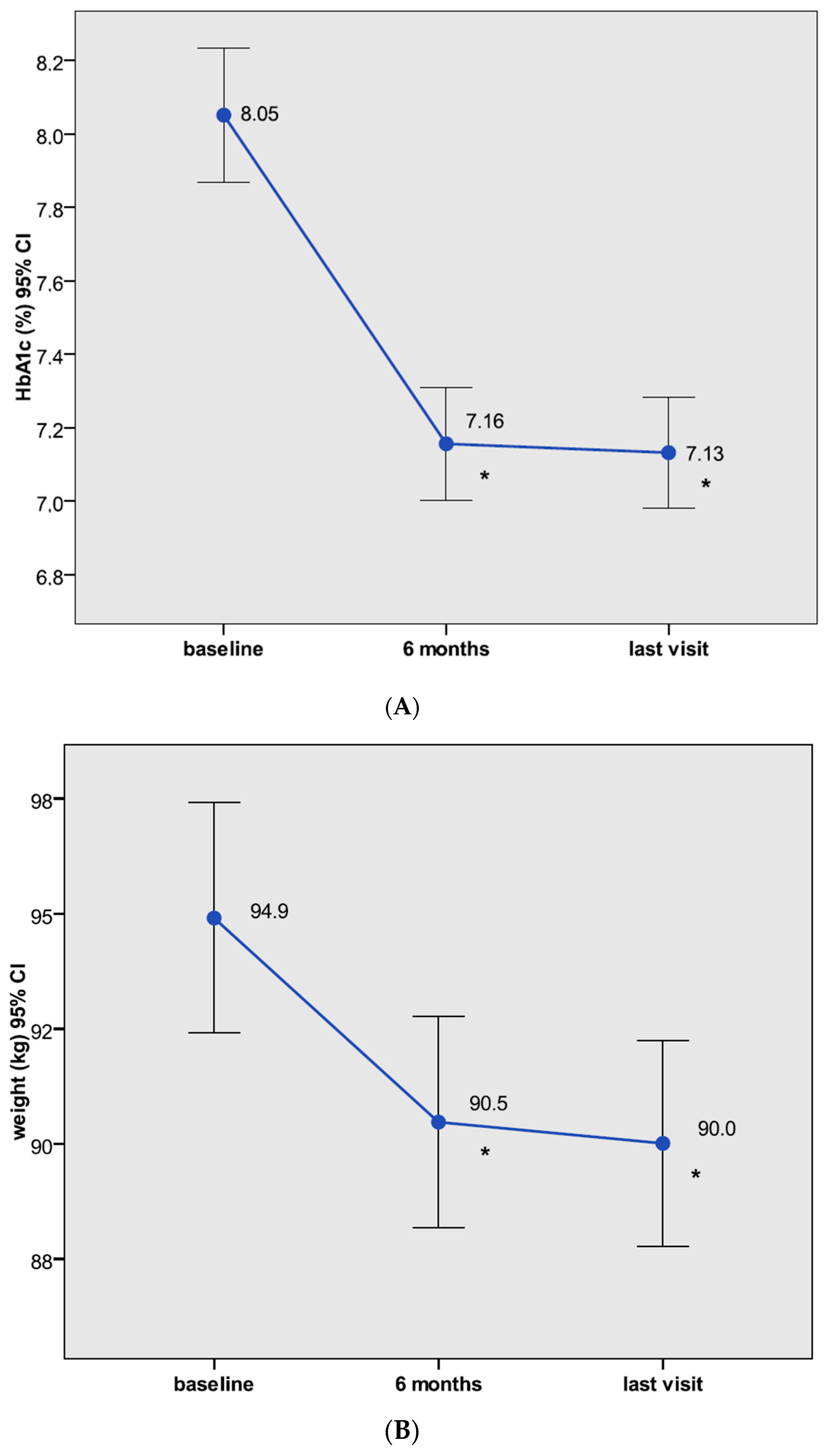 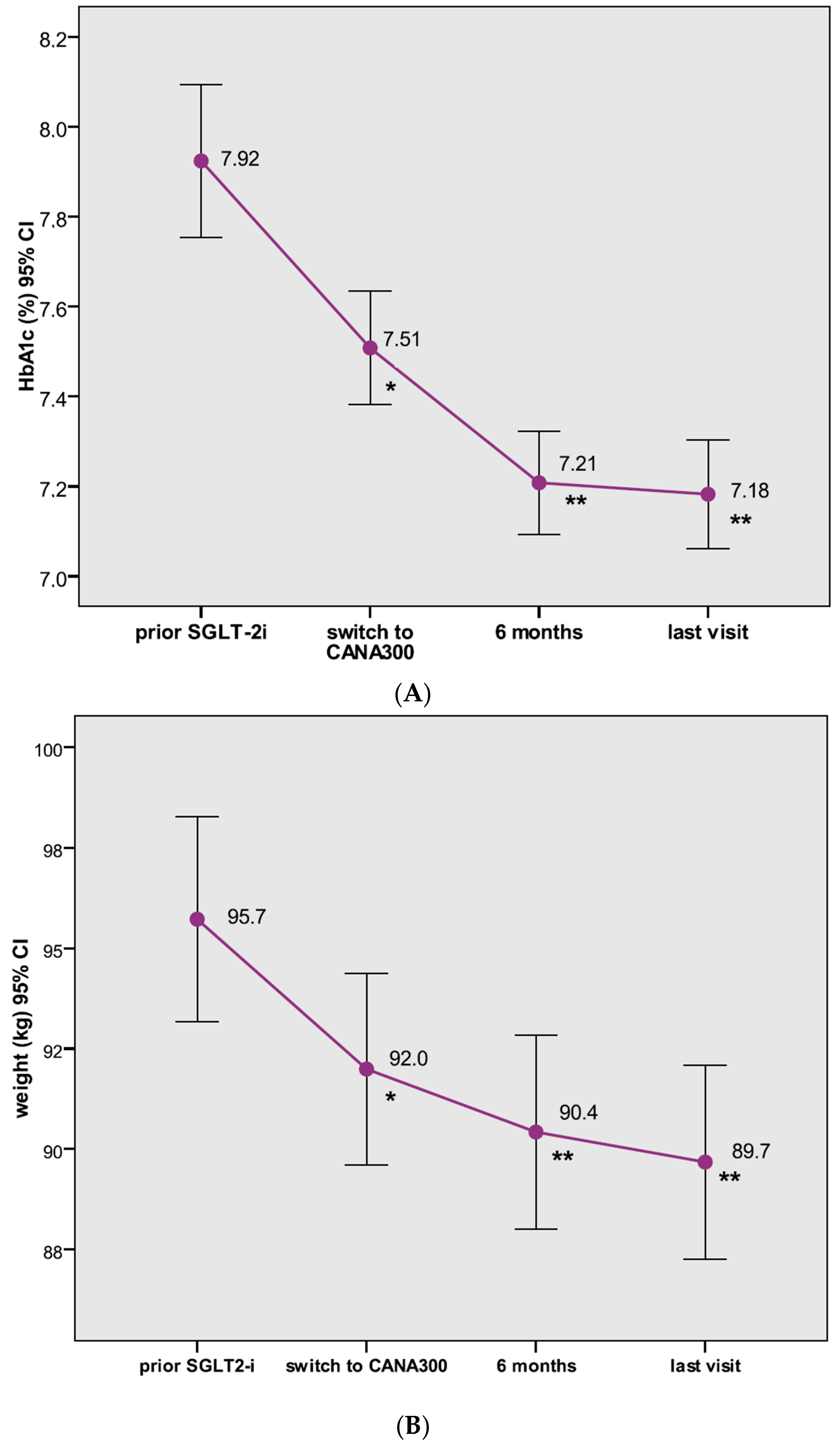