All patients who were candidates for pancreas transplantation were assessed by the committee of the Japan Society for Pancreas and Islet Transplantation using the following criteria.
(1) A diabetic patient with renal failure. Kidney transplantation is clinically indicated, and endogenous insulin secretion is significantly reduced (most cases required a <0.3 ng/mL difference between the results obtained before and after the glucagon stimulation test), so transplantation of both the pancreatic and renal organs is desirable for transplantation to achieve sufficient efficacy. The patient may have already received a kidney transplant or may receive a pancreas transplant at the same time as the kidney transplant.
(2) A patient with insulin-dependent diabetes who has been in a state where blood glucose levels are unstable and metabolic control is extremely difficult for a long time, despite treatment using insulin by a Diabetic Society-certified physician.
In cases of 1 or 2, in principle, the preferred age of the candidate for pancreatic transplantation would be ≤60 years.
The exclusion criteria were as follows: (1) Cases of progressive diabetic retinopathy (ophthalmic treatment should be prioritized); (2) cases of active infection, active liver dysfunction, or active peptic ulcer; (3) cases of malignant disease without complete remission; and (4) patients with any other condition rendering them unsuitable for organ transplantation.
Patients who are determined to be indicated for pancreatic transplantation are registered on the waiting list of the Japan Organ Transplant Network (JOT). Recipient selection is performed according to conditions that have already been published [17,18]. Briefly, recipient selection is performed based on the following conditions: The blood type must be compatible, and a direct crossmatch test must be negative. Recipients on the waiting list are prioritized for selection as follows: (1) The order of the recipients is arranged based on the number of human leukocyte antigen (HLA) mismatches, with priority given to cases involving fewer HLA mismatches; (2) cases are then prioritized in the order of SPK, pancreas transplantation after kidney transplantation (PAK), and pancreas transplantation alone (PTA); (3) priority is then given according to the length of the waiting period, with cases involving a longer waiting period prioritized over those with a shorter waiting period; (4) cases are then prioritized in ascending order according to the estimated transportation time, with priority given to cases with shorter estimated transport time.

All statistical analyses were performed using the R version 3.6.2 (Auckland University, Auckland, New Zealand) and the EZR software programs on R commander version 1.40, which are freely distributed from the homepage of Saitama Medical Center Jichi Medical University [19]. The characteristics of patients were summarized by a median with range for continuous variables and frequencies were shown for categorical variables. The Kruskal–Wallis test was used to test continuous variables, and the χ2 test was used to test nominal variables. To compare patient survival considering the time-varying effect of transplantation, Simon and Makuch’s modified Kaplan-Meier curve was used and time-varying Cox proportional hazards regression analysis was performed. For the cases whose registration on the waiting list for pancreas transplantation was canceled, their data were censored, and the observation period was terminated on the day of cancellation. The transplantation was treated as a time-varying covariate in the Cox model. In addition, multivariable Cox proportional hazards regression analyses were performed to reveal the impact of risk factors on patient survival. To avoid overfitting, covariates were restricted to one risk factor and the recipient’s age. Nonlinear association between relative hazard of patient survival among SPK recipients and a history of diabetes was assessed by including restricted cubic splines in the Cox model. p values of <0.05 were considered to indicate statistical significance.

Before registration, all subjects gave their informed consent to the committee of the Japan pancreas transplants registry, and information on the opt-out procedure was published on the Japan Society for Pancreas and Islet Transplantation website. The study was conducted in accordance with the Declaration of Helsinki, and the protocol was approved by the Ethics Committee of Fujita Health University (HM19-234, 28th October, 2019).

3.2. The Patient Prognoses of Patients on the Waiting List and Pancreas Transplantation Recipients

In conclusion, pancreas transplantation was found to improve the life prognosis of type 1 diabetic patients, especially those with end-stage renal failure who were waiting for SPK. The present study also revealed that among patients waiting for SPK, the survival rate decreased according to the duration of diabetes before surgery. Thus, it is desirable to perform transplantation as early as possible.

The part of this research was funded by the Japan Agency for Medical Research and Development; grant number: 18ek0510024h0002. 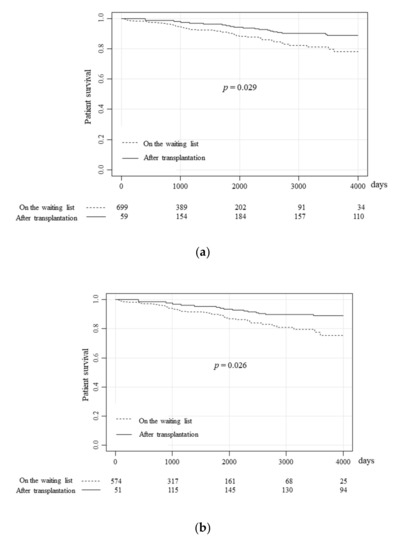 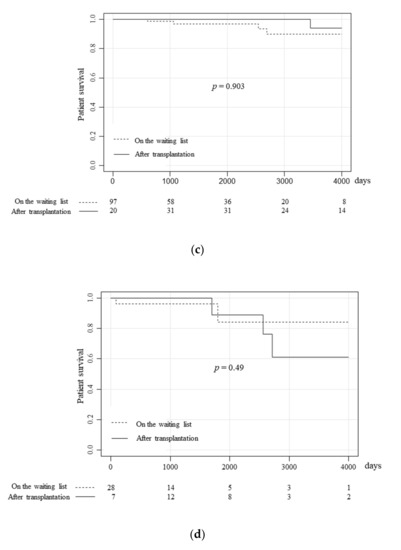 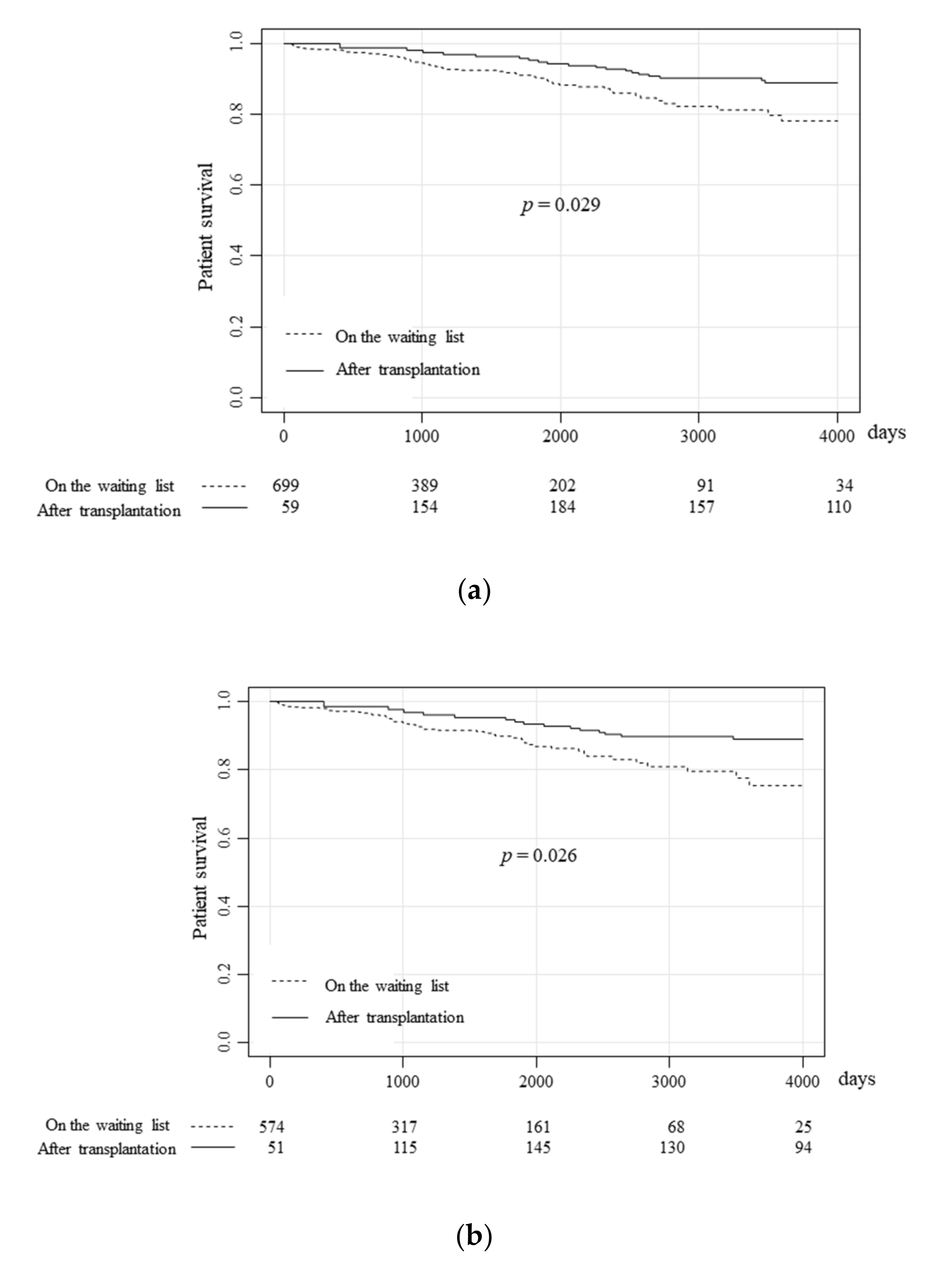 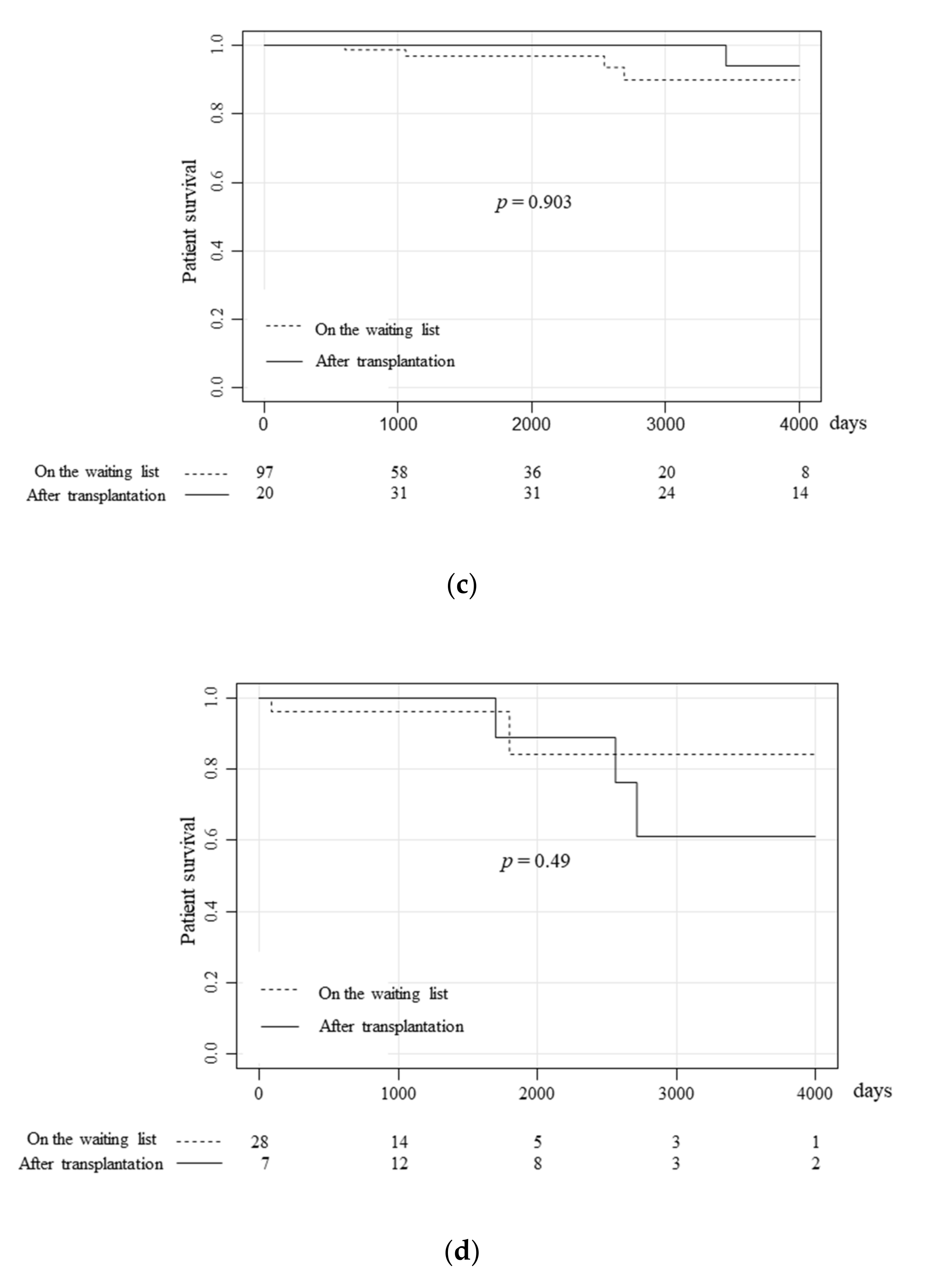 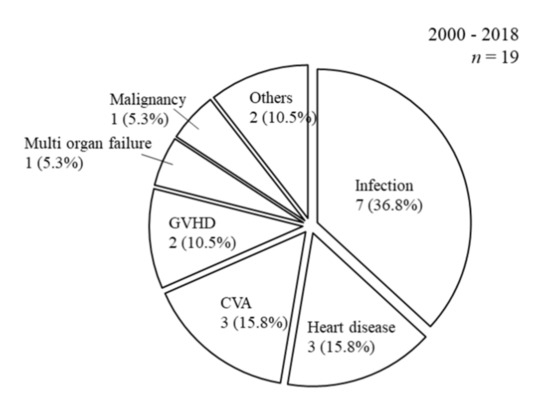 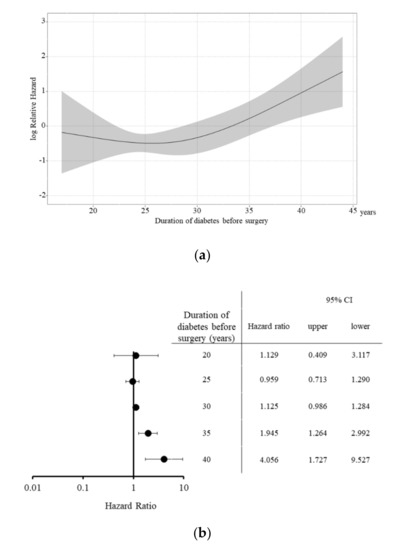 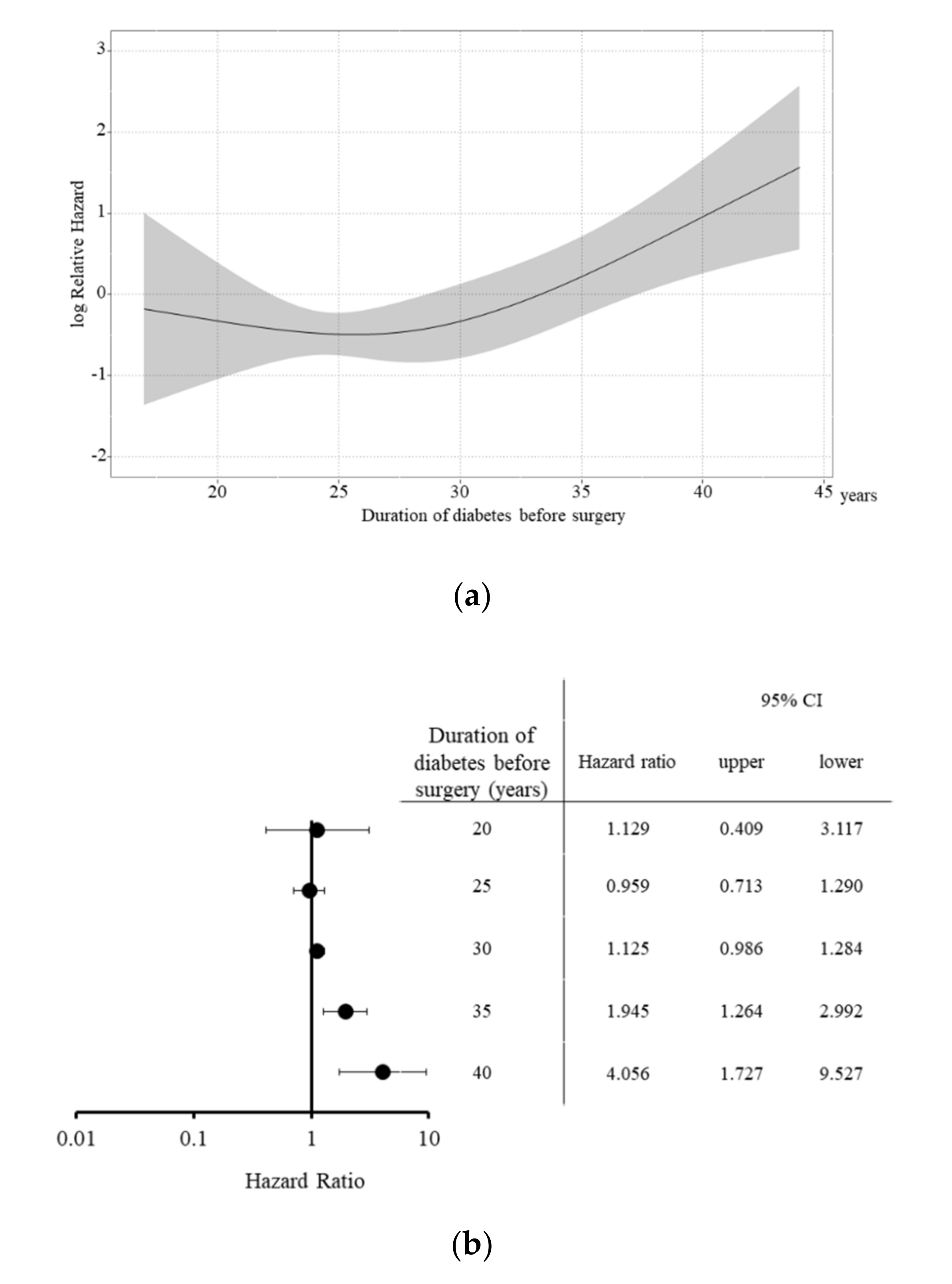 Table 3. Factors affecting the patient survival after SPK 2000–2018. SPK n = 298.
Table 3. Factors affecting the patient survival after SPK 2000–2018. SPK n = 298.
* The p values for factors were from a separate multivariable model adjusted for the recipient’s age at the time of transplantation. The cause of death was classified as cerebrovascular accident or “others”. BMI, body mass index; CIT, cold ischemic time; CNI, Calcineurin inhibitors; Cre, Serum Creatinine; CVA, cerebrovascular accident; DM, diabetes mellitus; HbA1c, Hemoglobin A1c; HD, hemodialysis; HLA, human leukocyte antigen; PAK, pancreas transplantation after kidney transplantation; PTA, pancreas transplantation alone; PD, peritoneal dialysis; SPK, simultaneous pancreas and kidney transplantation.
© 2020 by the authors. Licensee MDPI, Basel, Switzerland. This article is an open access article distributed under the terms and conditions of the Creative Commons Attribution (CC BY) license (http://creativecommons.org/licenses/by/4.0/).
We use cookies on our website to ensure you get the best experience. Read more about our cookies here.
Accept
We have just recently launched a new version of our website. Help us to further improve by taking part in this short 5 minute survey here. here.
Never show this again