Treatment of Bone and Joint Tuberculosis in France: A Multicentre Retrospective Study
Previous Article in Journal

The introduction of the nine-month short-treatment regimen (STR) has drastically improved outcomes of rifampicin-resistant tuberculosis (RR-TB) treatment. Adverse events (AE) commonly occur, including injectable-induced hearing loss. In Burundi we retrospectively assessed the frequency of adverse events and treatment modifications in all patients who initiated the STR between 2013–2017. Among 225 included patients, 93% were successfully treated without relapse, 5% died, 1% was lost-to-follow-up, 0.4% had treatment failure and 0.4% relapsed after completion. AE were reported in 53%, with grade 3 or 4 AE in 4% of patients. AE occurred after a median of two months. Hepatotoxicity (31%), gastro-intestinal toxicity (22%) and ototoxicity (10%) were most commonly reported. One patient suffered severe hearing loss. Following AE, 7% of patients had a dose reduction and 1% a drug interruption. Kanamycin-induced ototoxicity led to 94% of modifications. All 18 patients with a modified regimen were cured relapse-free. In this exhaustive national RR-TB cohort, RR-TB was treated successfully with the STR. Adverse events were infrequent. To replace the present STR, all-oral regimens should be at least as effective and also less toxic. During and after transition, monitoring, management, and documentation of AE will remain essential.
Keywords: multi-drug-resistant tuberculosis; short treatment regimen; Burundi multi-drug-resistant tuberculosis; short treatment regimen; Burundi

Tuberculosis (TB) is among the lead causes of deaths caused by antimicrobial resistance. While 484,000 people developed drug rifampicin-resistant tuberculosis (RR-TB) in 2018, only 187,000 were detected and notified, and 156,000 started treatment. Globally, RR-TB treatment success was 56% [1]. Short treatment regimens (STR), based on the so-called “Bangladesh regimen”, showed over 80% treatment success [2,3], compared to 75% of patients treated with longer individualised regimens [4].
Occurrence of adverse events (AE) deemed “severe” varies between 5.6% and 48.2% in patients on STR [5,6]. Among drugs used in STR, second-line injectables have the highest risk of severe AE leading to treatment discontinuation (capreomycin (Cm) 8.2%, kanamycin (Km) 7.5%), while others have a lower risk (moxifloxacin (Mfx) 2.9%, clofazimine (Cfz) 1.6%, levofloxacin 1.3%) [7]. Irreversible hearing loss resulting from injectable use is one of the most debilitating events [7,8]. In a rapid communication, the WHO therefore recommended phasing out injectable drugs in favor of all-oral short or long individualised regimens containing bedaquiline, depending on baseline resistance [9]. The long-term safety and effectiveness of these regimens, and their potential to prevent acquired resistance to bedaquiline, is still to be established [10]. Meanwhile, appropriate AE management in STR is essential.
Burundi started RR-TB treatment with a nine-month STR in May 2013, as part of a nine-country African study, with 91.8% treatment success. In this study, 89.2% of patients had an AE, 10.7% a severe AE, and 7.1% ototoxicity [11]. Several studies have looked at incidence and grading of AE in RR-TB treatment [7,12]. However, little evidence exists on AE grading over time, frequency, and timing of regimen modification in terms of dose reductions or treatment interruptions, and subsequent changes of AE grading. We aimed to describe the time course of AE, regimen modifications and resulting changes in AE grading in patients who started the RR-TB STR between May 2013 and December 2017 in Burundi. We also describe characteristics and treatment outcomes for these patients.

This is a retrospective analysis of routine program data of RR-TB patients in Burundi. All patients who initiated STR between May 2013 and December 2017 in Burundi were included. Data were collected until October 2019. Eligibility for STR was RR-resistance by Xpert® Mycobacterium Tuberculosis/Rifampicin (Xpert MTB/RIF) (Xpert; Cepheid, Sunnyvale, CA, USA), drug susceptibility testing (DST), and no previous treatment with second-line drugs, nor known fluoroquinolone (FQ) or injectable resistance. Additionally, written voluntary consent was required for the prospective study between May 2013–May 2015, including for hospitalization for the study duration. During that period, additional exclusion criteria were age <15 years, pregnancy, a pre-treatment electrocardiogram (ECG) with a QT-interval of >500 ms, or exclusion based on assessment by the principal investigator [11].
Burundi is a land-locked country in Central Africa, with a population estimated at 11 million in 2018 [13]. In Burundi, the respective incidences of TB and RR-TB are about 111 and 3.3 per 100000 population and 2600 patients are estimated to have died from TB in 2018 [1]. All TB-patients are followed by the National TB-programme of Burundi. There are 308 TB-treatment centers, 170 of which provide smear microscopy. The national reference laboratory performed culture and DST. RR-TB patients are referred to the national reference center for RR/multi-drug-resistant (MDR)-TB of Kibumbu (Centre National de Reference des Tuberculeux Rifampicin/Multirésistants de Kibumbu; CNPEC-TB/MR).
Smears and cultures of sputum specimens were collected before treatment initiation, and smears monthly during treatment (Table 1). Culture was performed on Löwenstein-Jensen solid medium. Follow-up after cure continued at least up to one year after treatment completion with smear and culture performed every six months. Xpert MTB/RIF testing became available in 2012 at the national reference laboratory and was performed on TB-patients with a history of TB-treatment or known RR-TB contacts. During the prospective study, samples were also sent to the supra-national reference laboratory of the Institute of Tropical Medicines, Antwerp (ITM) for DST [11].
All patients initiated a regimen containing Kanamycin (Km), normal-dose Moxifloxacine (Mfx), Prothionamid (Pto), Clofazimine (Cfz), Pyrazinamid (Z), high-dose Isoniazid (Hh) and Ethambutol (E) in the four-to-six-month intensive phase (duration depending on time of smear conversion), and Mfx-Cfz-Z-E in the five-month continuation phase.
Patients were examined at baseline and monthly after initiation for bacteriological progress and regularly for occurrence of AE (Table 1). Patients enrolled in the trial were hospitalised at the CNPEC-TB/MR for the treatment duration and re-assessed every six months for two years after completion. All other patients were hospitalised during the intensive phase, received daily treatment in a TB-treatment center in their community during the continuation phase, and were re-assessed at 6 and 12 months after completion. Patients who came for post-treatment follow-up during the trial, and for daily ambulatory treatment afterwards, received a compensation for transport costs.
AEs, detected during routine examinations (Table 1), were recorded monthly and graded using the scale of the French National Agency of Research on AIDS (Agence Nationale de Recherche sur le SIDA; ANRS) [14]. Hearing loss was measured in decibels (dB) using pure tone audiometry. The weighted average hearing loss was calculated and classified as the following grades of hearing loss compared to baseline: 0 (normal), 20 dB; 1 (mild): 21–40 dB; 2 (moderate): 41–70 dB; 3 (severe): 71–90 dB; 4 (very severe) >90 dB. Hearing loss of any grade was considered irreversible. Ototoxicity was managed by reducing the frequency of Km from daily to thrice a week and by replacing Km with capreomycin (Cm) in case of no improvement.
We defined cured as smear converted, and time until smear conversion as the number of days until the earliest of two consecutive negative smear results of at least 30 days apart since treatment initiation. Other outcomes were defined per WHO guidelines [15]. Relapse-free success included cure or treatment completion without evidence or relapse one year after treatment completion. Programmatically adverse outcomes included lost-to follow-up (LTFU), death, treatment failure and relapse. Clinically adverse outcomes included death, treatment failure and relapse. Bacteriologically adverse outcomes included treatment failure and relapse. AE were defined and graded per national protocol, based on the ANRS scale: Grades range 1–4, representing 1: mild, 2: moderate; 3: severe and 4: life-threatening or permanently disabling events [14]. Body mass index (BMI) groups were defined as follows: <16.0 kg/m2 severely underweight, 16.0–18.4 underweight, 18.5–24.9 normal, 25.0–29.9 overweight, ≥30 obese.
Programme data were collected by trained care providers on individual paper-based RR-TB registers stored at CNPEC-TB/MR. A copy followed the patient to ambulatory sites after the intensive phase, and updates were returned to the CNPEC-TB/MR, where they were entered into EpiData Entry database (version 3.1; EpiData Association, Odense, Denmark). Ambulatory care providers were trained in data collection, and the national RR-TB focal point conducted regular supervisory visits to ambulatory sites. A study database limited to study variables was constructed for analysis and de-identified data were shared with the analyst at ITM. Inconsistencies were solved through communication with the study team in Burundi and verification of the source documents.
Stata software (version 16.0; StataCorp LP, College Station, TX, USA) was used for analysis. Proportions were used to summarize categorical variables and medians, interquartile ranges (IQR), and ranges were used for continuous variables.
The study was approved by the National Ethics Committee of Burundi and the Institutional Review Board of the Institute of Tropical Medicines (ITM) in Antwerp, Belgium.

Of 225 patients, 209 (92.9%) were cured (185, 82.2%) or completed treatment (25, 10.7%) without evidence of relapse, one (0.4%) experienced treatment failure, three (1.3%) were lost-to-follow-up (LTFU), 11 (4.9%) died during treatment and one (0.4%) relapsed six months after being declared cured (Table 4).
Among those with relapse-free success, duration of treatment was nine (median, IQR: 9–9) months. Cured patients smear converted after one (median, IQR: 1–2) month. Culture results were incomplete at baseline and culture was not done monthly, but all available cultures for those with relapse-free cure were negative at six (n = 202) and nine (n = 190) months. The patient with treatment failure was HIV-positive and severely underweight. He smear converted after six months, but reconverted at eight months. Three patients who were LTFU had smear converted after one (median, IQR: 1–1) month. Two had mild hepatotoxicity, which resolved at month three and five. Among 11 patients who died, five (45.5%) died within two months after initiation. Four (36.4%) among the dead were HIV positive, and one was initiated on ART after enrolment. Four (36.4%) patients had a grade 1 AE before death, and three of which were also on ART (one neurological, one gastro-intestinal, one ototoxic event). Among 210 patients completing treatment, 198 (94.7%) had at least one follow-up visit and 81 (38.6%), 176 (83.8%), 53 (25.2%) and 43 (20.5%) had a follow-up visit 6, 12, 18 and 24 months after completion, respectively. Among patients returning after one year, all who had a smear (176, 100.0%) or culture (59, 33.5%) had a negative result. Two patients died seven days and six months after completion, the first one of pharyngeal cancer. We found no significant associations between having any AE, having any severe AE, or HIV-status with adverse outcomes.

This work was funded by Damien Foundation, Brussels, Belgium.

We are grateful to the staff of the National TB Programme of Burundi, as well as the National Reference Centre of Kibumbu. We thank all healthcare workers in the diagnostic and treatment centers. We are especially obliged to all patients included in this study. 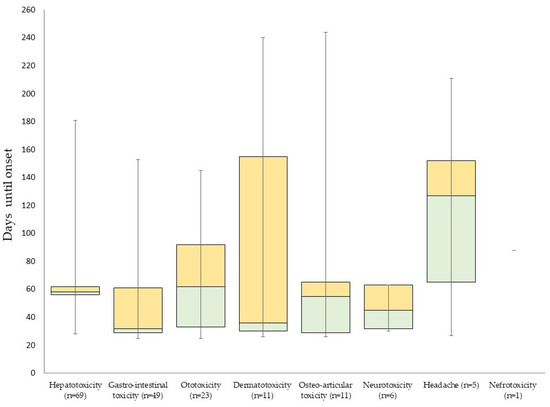 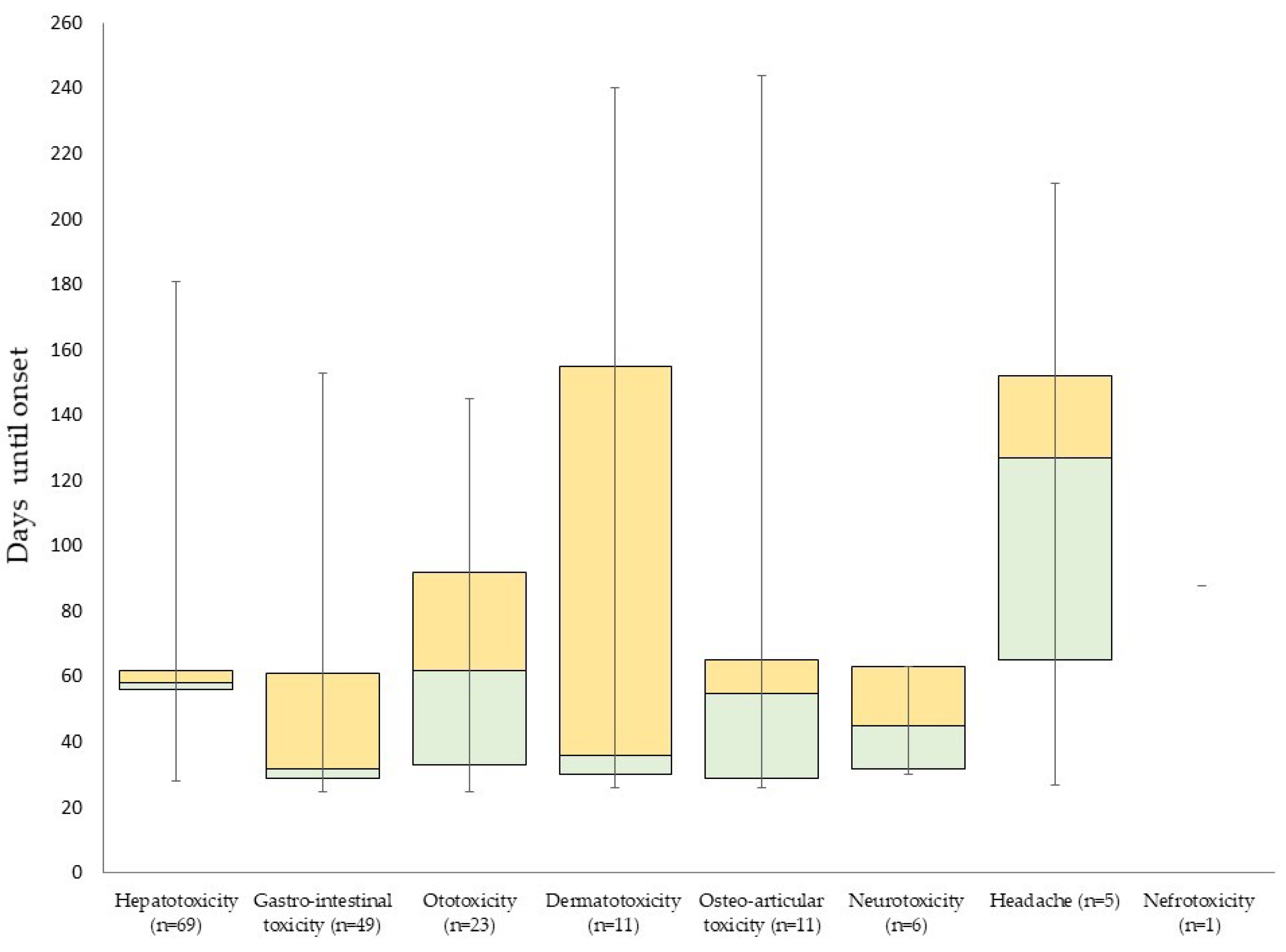 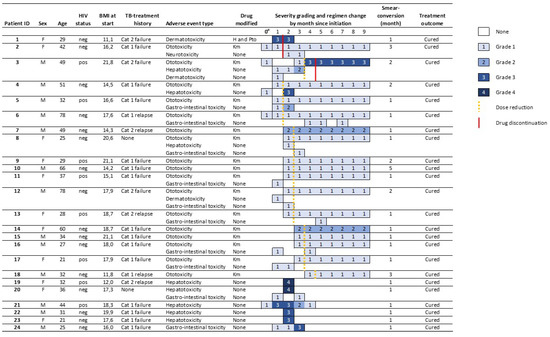