Retraction: López-Valverde, N.; et al. Use of Virtual Reality for the Management of Anxiety and Pain in Dental Treatments: Systematic Review and Meta-Analysis. J. Clin. Med. 2020, 9, 1025
Previous Article in Journal

The Use of a Virtual Reality Platform for the Assessment of the Memory Decline and the Hippocampal Neural Injury in Subjects with Mild Cognitive Impairment: The Validity of Smart Aging Serious Game (SASG)

UnReal? Investigating the Sense of Reality and Psychotic Symptoms with Virtual Reality

Distortions of reality, such as hallucinations, are common symptoms of many psychiatric conditions. Accordingly, sense of reality (SoR), the ability to discriminate between true and false perceptions, is a central criterion in the assessment of neurological and psychiatric health. Despite the critical role of the SoR in daily life, little is known about how this is formed in the mind. Here, we propose a novel theoretical and methodological framework to study the SoR and its relation to psychotic symptoms. In two experiments, we employed a specialized immersive virtual reality (VR) environment allowing for well-controlled manipulations of visual reality. We first tested the impact of manipulating visual reality on objective perceptual thresholds (just noticeable differences). In a second experiment, we tested how these manipulations affected subjective judgments of reality. The results revealed that the objective perceptual thresholds were robust and replicable, demonstrating that SoR is a stable psychometric property that can be measured experimentally. Furthermore, reality alterations reduced subjective reality judgments across all manipulated visual aspects. Finally, reduced sensitivity to changes in visual reality was related to self-reported prodromal psychotic symptoms. These results provide evidence for the relevance of SoR in the assessment of psychosis and other mental disorders in which reality is distorted. View Full-Text
Keywords: sense of reality; virtual reality; hallucinations; psychosis; derealization sense of reality; virtual reality; hallucinations; psychosis; derealization
►▼ Show Figures 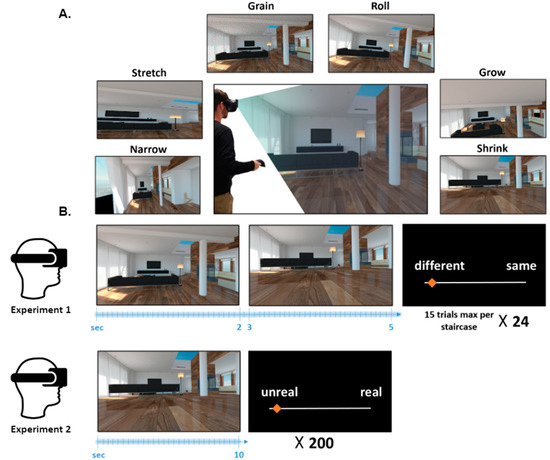