Estimating the Risk of COVID-19 Death during the Course of the Outbreak in Korea, February–May 2020
Previous Article in Journal

The COVID-19 Infection in Italy: A Statistical Study of an Abnormally Severe Disease

Early Phylogenetic Diversification of SARS-CoV-2: Determination of Variants and the Effect on Epidemiology, Immunology, and Diagnostics

The phylogenetic clustering of 95 SARS-CoV-2 sequences from the first 3 months of the pandemic reveals insights into the early evolution of the virus and gives first indications of how the variants are globally distributed. Variants might become a challenge in terms of diagnostics, immunology, and effectiveness of drugs. All available whole genome sequence data from the NCBI database (March 16, 2020) were phylogenetically analyzed, and gene prediction as well as analysis of selected variants were performed. Antigenic regions and the secondary protein structure were predicted for selected variants. While some clusters are presenting the same variant with 100% identical bases, other SARS-CoV-2 lineages show a beginning diversification and phylogenetic clustering due to base substitutions and deletions in the genomes. First molecular epidemiological investigations are possible with the results by adding metadata as travelling history to the presented data. The advantage of variants in source tracing can be a challenge in terms of virulence, immune response, and immunological memory. Variants of viruses often show differences in virulence or antigenicity. This must also be considered in decisions like herd immunity. Diagnostic methods might not work if the variations or deletions are in target regions for the detection of the pathogen. One base substitution was detected in a primer binding site. View Full-Text
Keywords: molecular epidemiology; SARS-CoV-2; COVID-19; virus variant detection molecular epidemiology; SARS-CoV-2; COVID-19; virus variant detection
►▼ Show Figures 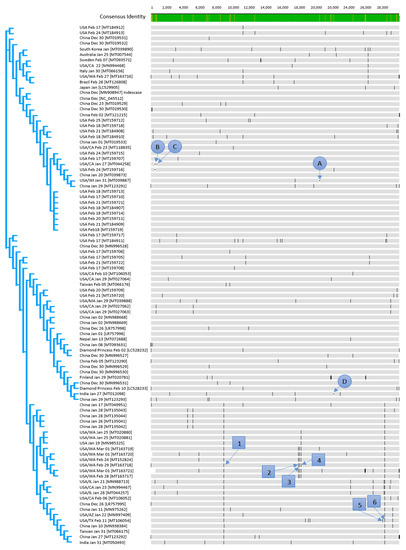 
Kaden R. Early Phylogenetic Diversification of SARS-CoV-2: Determination of Variants and the Effect on Epidemiology, Immunology, and Diagnostics. Journal of Clinical Medicine. 2020; 9(6):1615.


Kaden, Rene. 2020. "Early Phylogenetic Diversification of SARS-CoV-2: Determination of Variants and the Effect on Epidemiology, Immunology, and Diagnostics." J. Clin. Med. 9, no. 6: 1615.