Sickle cell disease (SCD) patients are thought to be at higher risk for urinary tract infections (UTIs) compared to the general population secondary to increased sickling, abnormal urinary acidification, and an inability to concentrate the urine. The incidence of UTI in febrile children with SCD in the United States is unknown. Our objectives were to determine the rate of UTI among febrile SCD children and describe the risk factors for UTI in this population. We conducted a retrospective chart review of all febrile SCD patients <4 years of age who presented to a pediatric emergency department from 2012–2017 and who had a sterile sample of urine for analysis. A total of 167 febrile patients with SCD with 464 visits were identified. The majority were African American (95.2%), female (58.7%), and had hemoglobin SS (HbSS) (65.3%). The rate of UTI was 4.1%. All patients with a UTI were African American females with a median age of 19 months (IQR 12–30). On regression analysis, no risk factors were associated with a UTI. We found the rate of UTI in febrile young children with SCD was comparable to non-SCD children. Larger studies are required to identify the presence of risk factors for UTI in this population. View Full-Text
Keywords: sickle cell disease; urinary tract infection; fever; children sickle cell disease; urinary tract infection; fever; children
►▼ Show Figures 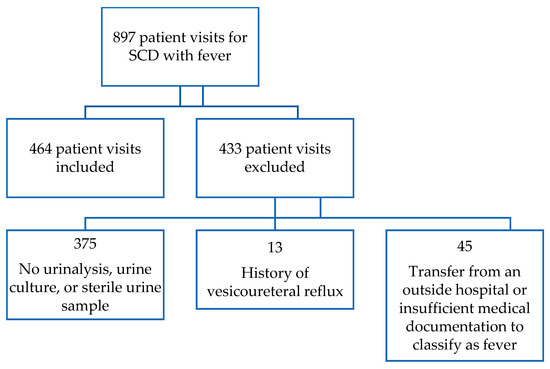 
Patel N, Farooqi A, Callaghan M, Sethuraman U. Urinary Tract Infection in Febrile Children with Sickle Cell Disease Who Present to the Emergency Room with Fever. Journal of Clinical Medicine. 2020; 9(5):1531.