Background: Antenatal Cytomegalovirus infection (CMV) can be associated with severe fetal symptoms and newborn outcome. The current prenatal diagnosis is based on amniocentesis (AC). No reliable biomarker for fetal infection is available. Methods: We measured Placenta-derived growth factor (PlGF), and soluble fms-like tyrosine kinase 1 (sFlt1), concentrations in maternal serum and amniotic fluid (AF) in context of maternal CMV primary infection. Blood sampling was carried out at the time of AC for detection of fetal CMV infection. The study cohort was divided into four subcohorts according to the presence or absence of fetal infection and preemptive hyperimmunoglobulin (HIG) treatment during the time interval between diagnosis of the CMV primary infection and AC. Results: The study cohort involved 114 pregnancies. In the non-transmitting subcohorts (NT) with and without prior HIG treatment, the median sFlt1 concentrations were 1.5 ng/mL (NT, HIG+) and 1.4 ng/mL (NT, HIG−), respectively. In the two transmitting groups (T) the concentrations were 1.3 ng/mL (T, HIG+) and 2.3 ng/mL (T, HIG−), respectively (NT, HIG− vs. T, HIG−, p < 0.001). The corresponding PlGF levels and the sFlt1/PlGF ratios showed no significant differences between the cohorts. The empirical cut-off values <1504 pg/mL sFlt1 and <307 pg/mL PlGF, were associated with the exclusion of CMV transmission (p < 0.001). Conclusion: sFlt1 concentration in the maternal blood could be a predictive biomarker for maternofetal CMV transmission.
Keywords: CMV; pregnancy; soluble fms-like tyrosine kinase 1; sFlt1; placental growth factor; PlGF; hyperimmunoglobulin; HIG CMV; pregnancy; soluble fms-like tyrosine kinase 1; sFlt1; placental growth factor; PlGF; hyperimmunoglobulin; HIG

Maternal infection with the cytomegalovirus (CMV) belongs to the most relevant antenatal infections which can result in the severe physical and mental developmental disorder of the offspring. The cases with the most severe postnatal sequelae are usually due to maternal infections in the first trimester where materno–fetal transmission occurs prior to 20–23 weeks of gestation. Later on in the pregnancy, the materno–fetal transmission rate is higher but hardly any child will be seriously symptomatic after birth.
To date, the diagnosis of a fetal infection can only be reliably made by amniocentesis (AC) [1]. Although invasive testing is relatively safe, it still carries a risk of miscarriage in about 1 in 1000 procedures. Therefore, current research focuses on ultrasound and biomarkers that could be used as surrogate parameters.
In the previous case study of Oliveira et al., the serum levels of soluble fms-like tyrosine kinase 1 (sFlt1) and placental growth factor (PlGF) were altered during maternal CMV infection [2]. The authors linked their observations with histological findings in placental tissue, such as a reduced number of chorionic villi and blood vessels. Abnormal placental microarchitecture, reduced blood flow, hypoxia and subsequent inflammatory response are well known in the pathogenesis of a symptomatic fetal CMV infection [3].
PlGF is a member of the vascular endothelial growth factor (VEGF) family involved in neoangiogenesis. It is synthesized in dependency on oxygen tension and changes over the course of the pregnancy. PlGF binds VEGF-receptor (Flt1), a receptor tyrosine kinase. Its soluble splice variant sFlt1 binds free PlGF and therefore antagonizes its effects [3]. The two serum markers sFlt1 and PlGF, especially the ratio of both, is generally used to stratify the individual risk of preeclampsia (PE) in symptomatic women in the context of the imbalance between angiogenic factors such as vascular endothelial growth factor (VEGF) or PlGF and anti-angiogenic factors like sFlt1 [4]. PE is defined as a new-onset hypertension in pregnancy accompanied by proteinuria after 20 weeks of gestation. Its pathophysiology as far as known has been described as a strong inflammatory reaction in uterine vessels [5] with an increase in CD4+ T-cells and inflammatory cytokines, along with an increase in reactive oxygen species and sFlt1 [6]. Early-onset PE developing before 34 weeks of gestation is related to an incomplete trophoblast invasion and a failure of normal spiral artery remodeling. sFlt1 is capable of binding and reducing PlGF levels, which leads to reduced proangiogenic signaling and insufficient spiral artery remodeling [7].
In this study, we analyzed the maternal serum marker levels of sFlt1 and PlGF at the time of AC due to maternal primary CMV infections. Furthermore, we compared the serum levels of the two markers with corresponding concentrations in the amniotic cavity.

The department of prenatal medicine at the University of Tuebingen, Germany, is a national tertiary referral center with a special interest in the management of primary CMV infection in pregnancy. When women were referred in the first trimester due to a recent primary CMV infection, we administered 200 IU per kg body weight of hyperimmunoglobulins (HIG) every 2 weeks for up to 20 weeks. A detailed description of the inclusion criteria is given elsewhere [8,9]. In short, for inclusion in the HIG treatment protocol, the diagnosis of a primary CMV infection should be made up to 14 + 6 weeks. Furthermore, the CMV IgG level (ECLIA) should be < 60 U/mL, reactivity against gB2 should not be detectable or just at onset of seroconversion (score 0 or 1, recIB), the CMV IgG avidity index (AI) should be < 45% (ECLIA) and the IgM index (ECLIA) should be > 1.0. In all other conditions, we followed the international recommendation [10,11] and did not administer HIG treatment. Prior to the implementation of our strict HIG administration protocol in 2013, we also administered HIG treatment to second trimester primary CMV infections, but with limited success.
In all cases with a proven first and early second trimester primary infection or in cases with anomalies that indicate a primary CMV infection [9,12], an AC is carried out at least six weeks after the assumed infection, predominantly at 20–23 weeks gestation. The viral transmission state is examined by using short-term (18 h-) microculture, viral isolation, in-house nested PCR (UL123/IE1-Ex4) and quantitative-rtPCR (UL83/pp65), respectively [8].
At the time of the AC, we also drew maternal blood to assess the IgG and IgM levels as well as the IgG avidity (ECLIA). After the analysis is finalized the blood and the amniotic fluid (AF) was cryopreserved at −80 degree Celsius. None of the pregnancies were complicated by preeclampsia.
For this retrospective study, we used the cryopreserved samples to measure PlGF and sFlt1 concentrations in the maternal serum and in the AF. For the analysis, we used the Elecsys PlGF- and sFlt1-ECLIA-assays on a Cobas 6000 analyzer (Roche, Mannheim, Germany). Both test systems are approved automated routine tests in preeclampsia diagnosis. In cases when sFlt1 concentrations in AF exceeded the measuring range, AF was diluted tenfold for processing.
The institutional ethics board approved this study (University Hospital of Tuebingen: project 237/2019BO2).
Statistical analysis: The pregnancies were stratified into four subcohorts according to whether HIG treatment was administered or not (HIG + or −) and according to the transmission status at the time of AC (T = transmitter, NT = non transmitter). The results are presented as median (25–75th interquartile range: IQR). The statistical analyses were performed using SPSS V.23 (IBM, Armonk, NY, USA). Significant differences were assumed at a p level of 0.05.
Ten women were latently CMV-infected at first diagnosis and served as a control. In 72 out of these 114 cases, simultaneously collected AF samples were evaluated. Additionally, we stratified additional cohorts by the presence of ultrasound abnormalities associated with a CMV infection. We used receiver operating characteristic (ROC) analyses for evaluation of the potential cut-off values.

We evaluated 114 serum samples from 114 pregnant women for PlGF and sFlt1 concentrations. In 34 cases, we observed materno–fetal transmission at the time of AC. Of those, 18 women did not receive HIG treatment (group A: T and HIG−) and in 16 cases, HIG treatment was administered (group B: T and HIG+). Of note, only three women in the latter group were enrolled in the ongoing Tuebingen HIG study [8]. In 80 pregnancies, materno–fetal transmission did not occur. Twenty-one women did not receive HIG treatment (group C: NT and HIG−) and 49 did (group D: NT and HIG). Ten women were latently CMV-infected at the first diagnosis and served as a control. Further study details are given in Table 1.

Table 3 gives the median marker levels in the AF and the respective ratio. The Kruskal–Wallis test showed a significant difference for both markers, sFlt1 (p < 0.01) and PlGF (p < 0.05) and the Mann–Whitney test demonstrated a highly significant difference between cohorts A and D for both, sFlt1 (p < 0.001) and PlGF (p < 0.01).

This work was supported by a grant for LP from the IZKF-Promotionskolleg, University Hospital of Tuebingen [No. 2017/2–25].

We thank all women participating in clinical studies on congenital CMV in our institution. Also, we would like to thank Veronique Baudy for her excellent support in sample handling, storage and technical support. We owe gratitude to Peter Martus, Head of the Tuebingen Institute for Clinical Epidemiology and applied Biometry for his important statistical consultation.

All authors report no conflicts of interest. The funders had no role in the design of the study; in the collection, analyses, or interpretation of data; in the writing of the manuscript, or in the decision to publish the results. 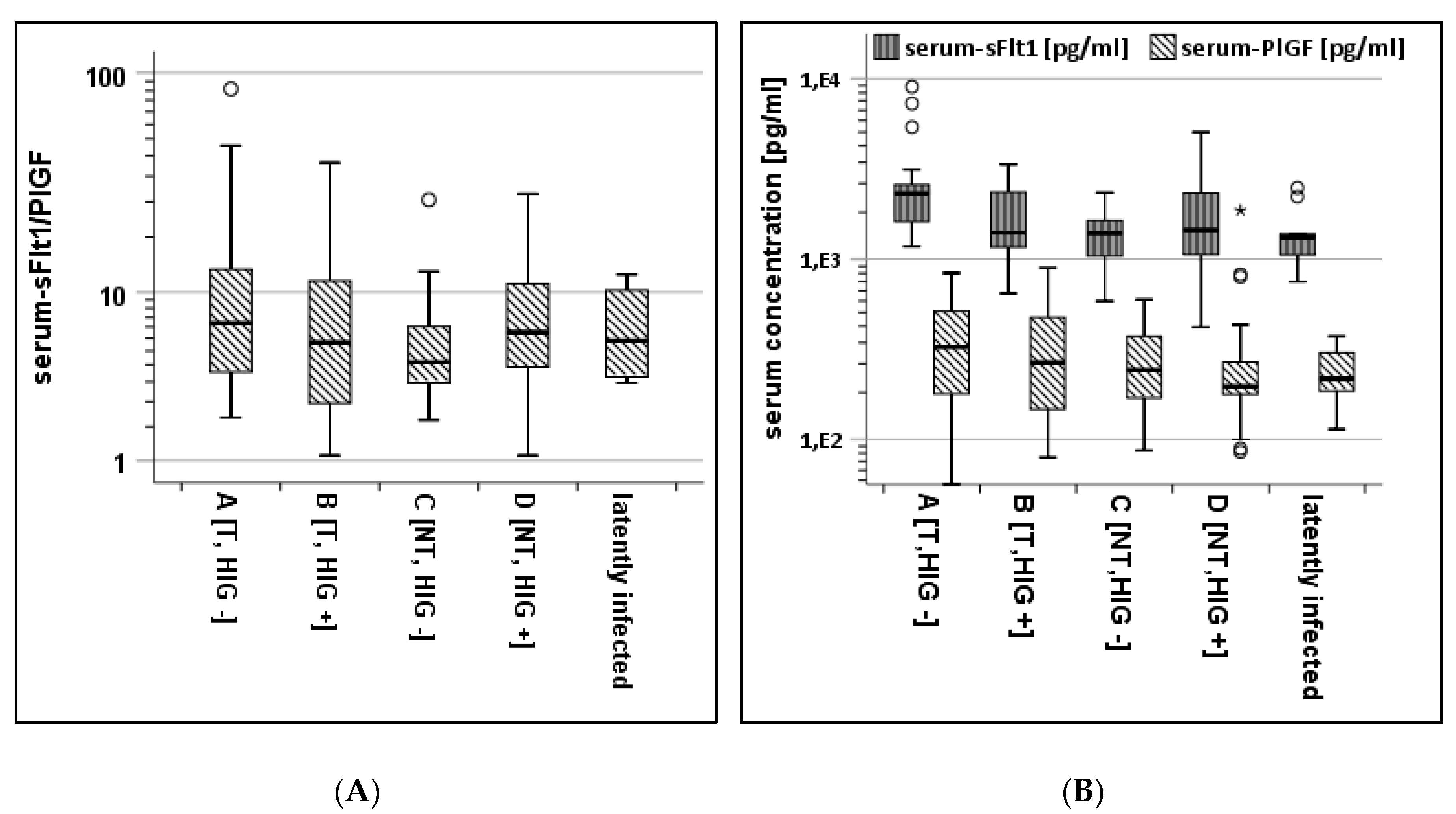