To investigate whether neutrophil granulocytes’ function relates to post-stroke infections and clinical outcome after stroke, we prospectively recruited 95 patients after ischemic stroke and tested them for their microbiocidal neutrophil functions in this exploratory study. Additionally, 24 age-adjusted controls were examined regarding neutrophil function. Phagocytic capacity and the ability of the neutrophil granulocytes to produce reactive oxygen species (ROS) as well as CD11b and CD16 receptor expression profile were measured by flow cytometry at days 1, 3, 7, and 90 after symptom onset. Primary outcome was the development of an infection within the first week after stroke. Results of neutrophil functional measurements were compared between patients with and without infection as well as between all stroke patients and controls. Further risk factors for the development of infections were summarized in an infection-risk score for the purpose of multivariate statistical analysis. The ROS production in neutrophils after stimulation with formyl-methionyl-leucyl-phenylalanine (fMLP) was reduced at baseline in patients with post-stroke infections compared to those without (p = 0.013). This difference proved to be independent from the infection-risk score in the binary logistic regression (p = 0.011). Phagocytosis and oxidative bursts were not significantly reduced in the whole stroke patient group compared to controls. Dysfunction of neutrophil granulocytes seems to play a significant role in the development of post-stroke infections. Further studies are warranted to investigate neutrophil granulocytes´ function as a potential biomarker of post-stroke infections. View Full-Text
Keywords: stroke; inflammation; neutrophils; immunodepression; oxidative burst stroke; inflammation; neutrophils; immunodepression; oxidative burst
►▼ Show Figures 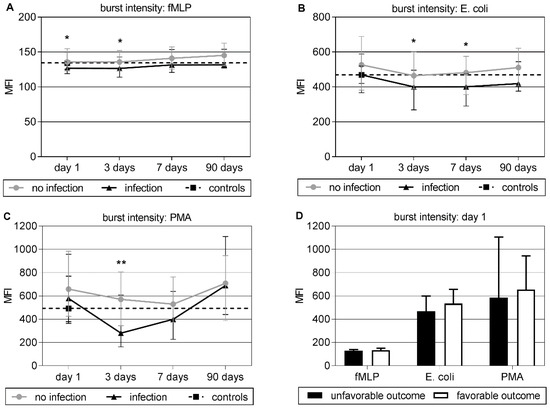