Introduction: We report outcome data of patients treated with coronary bioresorbable scaffolds up to 5 years and investigate predictors of adverse events. Methods: Consecutive patients treated with at least one coronary bioresorbable scaffold (BRS, Abbott Vascular, Santa Clara, USA) between May 2012 and May 2014 in our center were enrolled. Clinical/procedural characteristics and outcome data at 1868 (1641–2024) days were collected. The incidence of scaffold thrombosis (ScT), restenosis (ScR), and target lesion failure (TLF) and their predictors were investigated using Kaplan–Meier and Cox regression analysis. Results: 512 consecutive patients and 598 lesions were included in the database. A total of 30 ScT, 42 ScR, and 92 TLF were reported. The rate of ScT was 3.6% in the first year, 2.2% in the second–third year, and 0.6% in the fourth–fifth year after implantation. The corresponding rates of ScR were 2.5%, 5.7%, and 1.1%. The corresponding incidence of TLF was 8.8%, 8.0%, 3.8%. Procedural parameters (vessel size, scaffold footprint) and the technique used at implantation (including predilation, parameters of sizing, and postdilation) were predictors of ScT and TLF in the first three years after implantation. In contrast, only diabetes was predictive of events between 4–5 years (HR 6.21(1.99–19.40), p = 0.002). Conclusions: After device resorption, the incidence of very late adverse events in lesions/patients implanted with a BRS decreases. Procedural and device-related parameters are not predictors of events anymore. View Full-Text
Keywords: restenosis; thrombosis; bioresorbable scaffolds; coronary stent restenosis; thrombosis; bioresorbable scaffolds; coronary stent
►▼ Show Figures 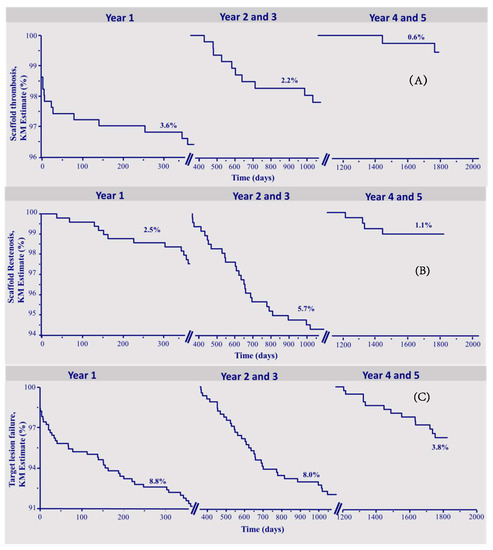