Vital pulp therapy is a dental terminology that aims to preserve pulp tissue damaged by dental caries or traumatic dental injuries [1]. Among possible modalities included in vital pulp therapy, direct pulp capping (DPC) is particularly indicated when the pulp tissue is exposed. DPC is a procedure that applies a pulp capping material onto a pulp exposure site for hard tissue regeneration (reparative dentin formation) [2].
In the case of pulpal exposures, dental pulp stem cells (DPSCs) in the pulpal tissue can proliferate and differentiate into odontoblasts, facilitating hard tissue regeneration [3]. Although DPSCs have potentials to form a hard tissue barrier, pulp capping materials also promote hard tissue regeneration and prevent bacterial invasion [4]. Thus, pulp capping materials should be considered on the basis of biocompatibility, antibacterial, and anti-inflammatory properties, and bioactivity that promotes DPSC activity and pulp tissue healing [5,6,7,8].
Calcium hydroxide has traditionally been used as a pulp capping material for DPC. However, the reparative dentin formed by calcium hydroxide is porous and susceptible to bacterial invasion [9]. Recently, mineral trioxide aggregate (MTA) has served as a good pulp capping material. MTA is a calcium silicate cement with good antibacterial properties, sealing ability, and biocompatibility [10]. Previous studies showed that MTA can stimulate DPSC differentiation [11]. However, MTA requires several hours for setting and can cause tooth discoloration [12,13]. Several pulp capping materials have been developed to overcome MTA’s drawbacks. TheraCal LC (TC) is a resin-modified MTA-based material that can easily be set using light curing. TC has good bioactivity with reduced incidence of tooth discoloration compared to MTA [14,15]. Since TC contains resin monomers, there are still concerns regarding its detrimental effect on DPSCs [16]. A previous study on the cytocompatibility of various pulp capping materials demonstrated that TC showed the lowest cytocompatibility compared to MTA and Biodentine [17].
Recent advances in RNA sequencing technology can provide more accurate measurement of transcript levels. RNA sequencing is extremely sensitive and accurate in detecting and quantifying gene expression levels compared to other methods [18]. Thus, exploring time-dependent changes in gene expression profiles can more precisely identify the dynamic response of pulp cells exposed to pulp capping materials.
While the effect of various pulp capping materials on DPSCs have been extensively identified, the pulp cell response from primary teeth is still unclear. Considering the abundance of undifferentiated mesenchymal stem cells present in the pulp tissue of primary teeth [19], the effect of pulp capping materials on human deciduous tooth-derived dental pulp cells should be investigated. Therefore, the purpose of this study was to identify the genetic response of human deciduous tooth-derived dental pulp cells exposed to TC and MTA and to predict the function of gene–gene interactions with time-dependent manner.

Cell viability was determined using the water-soluble tetrazolium salt (WST) based assay (EZ-CYTOX; Daeil Lab, Seoul, Korea). The cells were seeded onto 96-well plates with α-MEM with 10% FBS at 2 × 104 cells/well and were exposed to experimental materials for either 24 or 72 h. Various concentrations of the experimental materials were tested, including dilution ratios of 1/100, 1/50, 1/5, and 1. After 24 h of incubation, 10 µL tetrazolium salt reagent (EZ-CYTOX) was added to each well and incubated for another 4 h at 37 °C. The optical density (OD) of each well was determined at 450 nm on a multi-well plate reader (Multiskan GO, Thermo scientific, Waltham, IL, USA). Cell viability was measured as a ratio of optical density from experimental material to control (no treatment). For statistical analysis, the Kruskal–Wallis test was performed and Mann–Whitney test was performed as post hoc analysis. p-values <0.05 indicated statistical significance.

The materials used in this study were MTA (ProRoot MTA; Dentsply, Tulsa Dental, Tulsa, OK, USA) and TC (Bisco Inc., Schaumburg, IL, USA). MTA and TC were prepared according to the manufacturer’s instructions under aseptic conditions. Next, each material was molded into a polyethylene tube (5 mm diameter, 3 mm height). TC was light cured for 120 s for sufficient curing level and maintained for 24 h at 37 °C in a humidified atmosphere containing 5% CO2. MTA was allowed to set for the same condition with TC. The samples were sterilized using ultraviolet radiation. α-MEM (50 ml) supplemented with 1% penicillin and streptomycin was added to the molded materials for infusion. Before use, undiluted, 1/5, 1/10, 1/50, and 1/100 dilutions of the materials were prepared and filtered using a 0.2 μm syringe filter.

2.4. RNA Isolation and Library Preparation for Next Generation Sequencing

QuantSeq 3′ mRNA-Seq reads were aligned using Bowtie2 [20]. Bowtie2 indices were either generated from the genome assembly sequences or representative transcript sequences that aligned to the genome and transcriptome. The alignment file was used to assemble transcripts, estimate transcript abundance, and detect differential gene expression. DEGs were determined based on the counts from unique and multiple alignments using coverage in Bedtools [21]. Read count data were processed using the quantile normalization method in EdgeR, a Bioconductor package in R (R development Core Team, 2016) [22]. The cutoff threshold for DEGs was set at 2-fold change.
Gene classification was based on the Database for Annotation, Visualization and Integrated Discovery (DAVID) bioinformatics software 6.8 (http://david.abcc.ncifcrf.gov/) and Medline databases (http://www.ncbi.nlm.nih.gov/). Using DAVID tools, enriched GO function including BPs, MFs, and CCs were identified based on p-values of <0.05. All mRNA-seq data were deposited in GEO (No. GSE139497).

GSEA was performed on selected data using the online GSEA 4.0.0. program (http://software.broadinstitute.org/gsea/index.jsp) [23]. To assess KEGG pathways and pathway genes, we used gene sets with FDR set at q-value <0.05 [24]. For analyzing the molecular interactions, the STRING was employed to construct a PPI network. The minimum required interaction score was set at the highest confidence interval (>0.900), and the inflation parameter was set as 3 for MCL clustering.

Here, 4711 genes with at least a 2-fold difference were identified out of a total of 25,737 genes examined. Scatter plot analysis results showed different DEG distributions between TC and MTA. The expression of most genes showed a less than 2-fold difference between TC and MTA (Figure 2). Gene category charts showed that the DEG distribution varied according to exposure time (Figure 3). In the charts, the number of upregulated and downregulated DEGs in TC increased over time compared to MTA.

KEGG pathway enrichment analysis was performed to assess DEG functional annotations. Here, 33 significantly enriched KEGG pathways were identified based on the gene set enrichment analysis (GSEA). Figure 5 illustrates the top five KEGG pathways according to each section. Two enriched pathways were identified in the shared DEGs between TC 24 h and 72 h, including neuroactive ligand–receptor interaction and the calcium signaling pathway. Table 1 and Table 2 show the details of the identified KEGG pathway involved in TC in a time-dependent manner. The DEGs involved in KEGG pathway in TC for both 24 h and 72 h are summarized in Table 3, Table A1 and Table A2.

This work was supported by the National Research Foundation of Korea (NRF) grant funded by the Korea government (MSIT) (No. 2019R1A5A2027521 and NRF-2018R1D1A1B07047482) and a grant of Chonnam National University Hospital Biomedical Research Institute (BCRI19027). 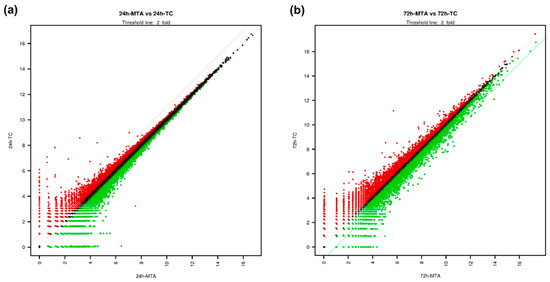 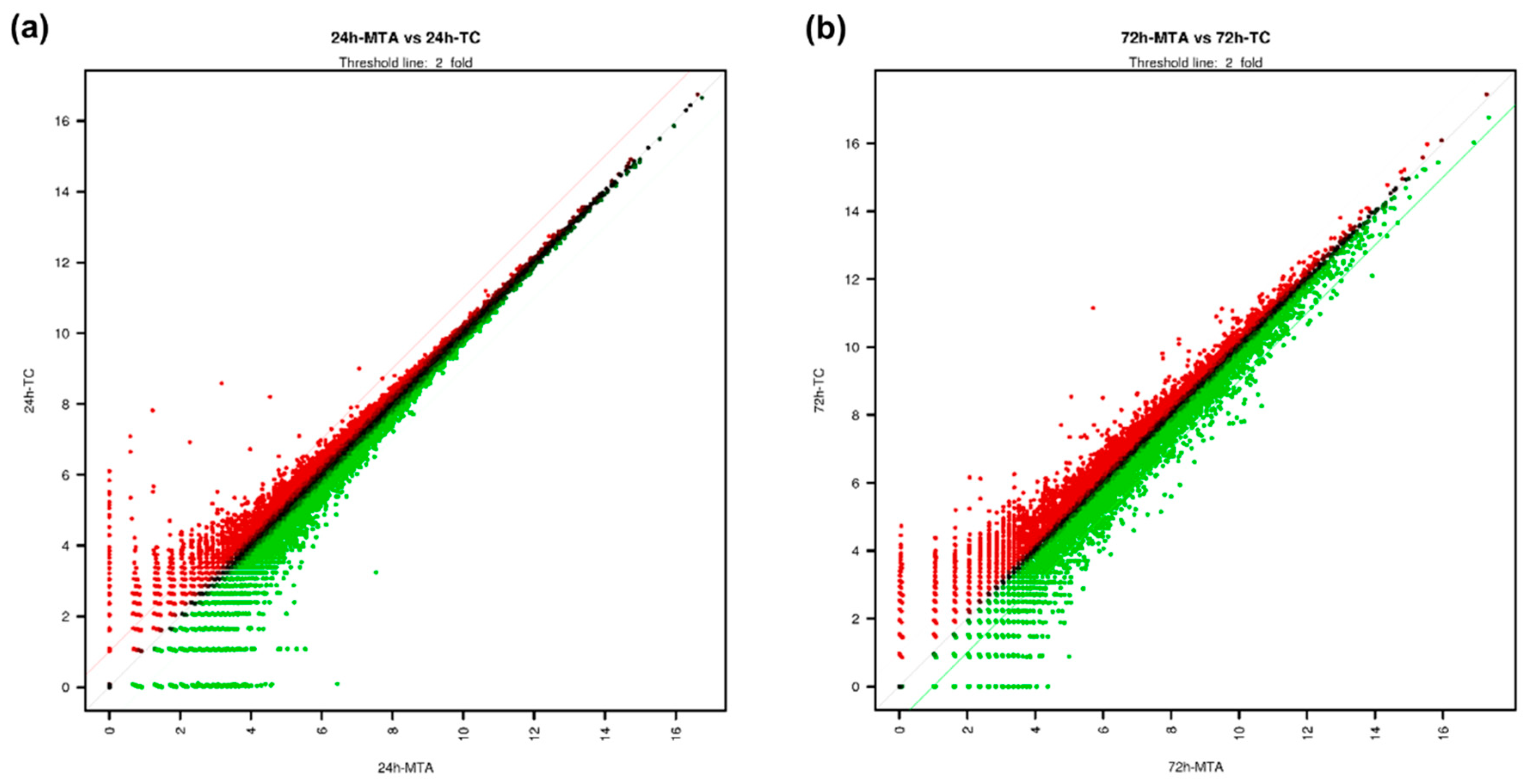