A preliminary evaluation of the parotid secretion cellular composition in patients with Sjogren’s Syndrome (SS) and a diagnostic accuracy assessment of salivary lymphocyte detection and immunophenotyping in Sjogren’s Syndrome diagnosis and prognosis were performed. The study included 40 consecutive patients, aged 19–60 years, with parenchymal sialadenitis associated with Sjogren’s Syndrome, and 20 healthy donors. The exclusion criteria were exacerbation of sialadenitis, chronic infections, malignant neoplasms, and lymphoproliferative diseases. The standard diagnostic tests were minor salivary gland biopsy and parotid sialography. Immunophenotyping of parotid secretion lymphocytes was performed by multicolor flow cytometry. Lymphocytes were detectable in parotid secretion of patients affected by Sjogren’s Syndrome, both primary (pSS) and secondary (sSS) form, but not in that from healthy donors. Sensitivity, specificity, positive, and negative predictive values of lymphocytes detection in parotid saliva were 77.5%, 100%, 100%, and 69%, respectively. The mean numbers of the total T-cell population, T-helper cells, and T-cytotoxic cells were 71.7%, 41.6%, and 53%, respectively. The immunophenotype of lymphocytes obtained by patients’ parotid flow resembles the immunophenotypes of glandular biopsies currently known. Our preliminary data suggest the use of saliva as an alternative and non-invasive method for evaluating the prognosis of Sjogren’s Syndrome. View Full-Text
Keywords: salivary glands; saliva; lymphocytes; Sjogren’s syndrome; chronic sialadenitis salivary glands; saliva; lymphocytes; Sjogren’s syndrome; chronic sialadenitis
►▼ Show Figures 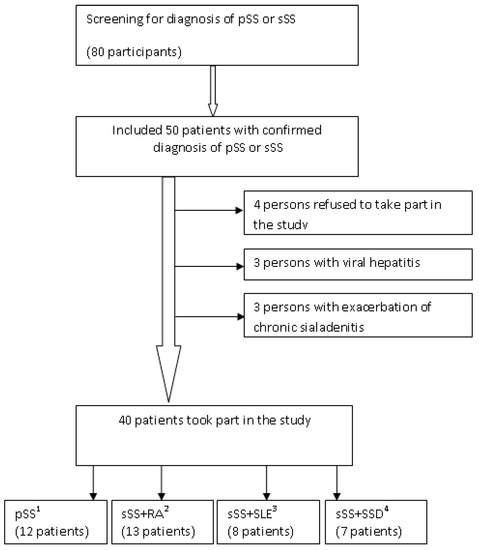