Canaloplasty in Pigmentary Glaucoma: Long-Term Outcomes and Proposal of a New Hypothesis on Its Intraocular Pressure Lowering Mechanism
Previous Article in Special Issue

Hydroceles of the Canal of Nuck in Adults—Diagnostic, Treatment and Results of a Rare Condition in Females

Minimal-invasive hepatectomy (MIH) has been increasingly performed for benign and malignant liver lesions with most promising short-term results. However, the oncological role of MIH in the treatment of patients with colorectal liver metastases (CRLM) needs further investigation. Clinicopathological data of patients who underwent liver resection for CRLM between 2012 and 2017 at the Department of Surgery, Charité-Universitätsmedizin Berlin, and the Inselspital Bern were assessed. Postoperative outcomes und long-term survivals of patients following MIH were compared with those after conventional open hepatectomy (OH) after 1:1 propensity score matching. During the study period, 229 and 91 patients underwent liver resection for CRLM at the Charité Berlin and the Inselspital Bern, respectively. Patients who underwent MIH in one of the two centers (n = 69) were compared with a matched cohort of patients who underwent OH. MIH was associated with lower complication rates (23% vs. 44%, p = 0.011), shorter length of intensive care unit stay (ICU, 1 vs. 2 days, p = 0.043), shorter length of hospital stay (7 vs. 11 days, p < 0.0001), and a reduced need for intraoperative transfusions (12% vs. 25%, p = 0.047) compared to OH. R0 status was achieved in 93% and 75% of patients after MIH and OH, respectively (p = 0.005). After a median follow-up of 31 months, MIH resulted in similar five-year overall survival (OS) rate (56% vs. 48%, p = 0.116) in comparison to OH. MIH for CRLM is associated with lower postoperative morbidity, shorter length of ICU and hospital stay, reduced need for transfusions, and comparable oncologic outcomes compared to the established OH. Our findings suggest that MIH should be considered as the preferred method for the treatment of curatively resectable CRLM. View Full-Text
Keywords: colorectal liver metastases; laparoscopic liver surgery; minimal invasive surgery colorectal liver metastases; laparoscopic liver surgery; minimal invasive surgery
►▼ Show Figures 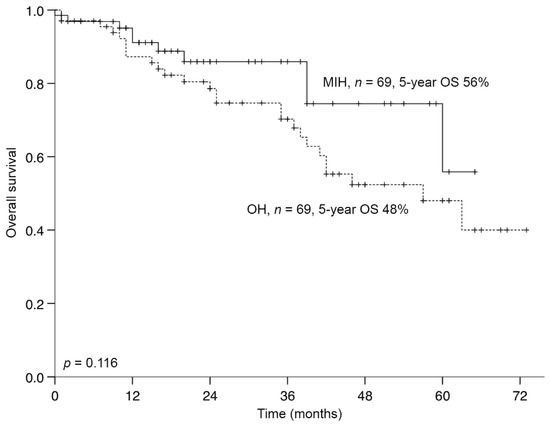