Esophageal squamous cell carcinoma (ESCC) and head/neck squamous cell carcinoma (HNSCC) are very common cancers worldwide, and there is higher incidence of synchronous ESCC/NSCC in Taiwan. The aim of the current study was to investigate the efficacy of different chemotherapy regimens in patients with locally advanced synchronous ESCC/HNSCC who received curative concurrent chemoradiotheapy (CCRT). A total of 75 patients were identified and assigned to one of two groups: 45 patients receiving cisplatin/5-fluorouracil (5-FU) regime in one group and 30 patients receiving a weekly cisplatin regime in the other. Overall survival (OS) was calculated from the date of diagnosis of the ESCC or HNSCC to the date of death from any cause or the most recent follow-up. Kaplan–Meier curves and log-rank tests were used to estimate OS and differences between the two groups, respectively. There was no significant difference in the analysis of OS between the cisplatin/5-FU and the weekly cisplatin groups. However, patients that interrupted their CCRT were found to have worse OS compared to those without interruptions (5.4 months versus 18.8 months, p = 0.002). In subgroup analysis, patients without interruptions of CCRT had a better OS than those with interruptions in the cisplatin/5-FU group (13.0 months versus 5.4 months, p = 0.041) as well as in the weekly cisplatin group (21.4 months versus 5.0 months, p = 0.017). Interruption of CCRT was the only independently poor prognostic factor of OS in the univariate and multivariate (hazard ratio 0.18, p < 0.001) analyses. Most interruption of CCRT resulted from adverse events (AEs) or serious AEs. Although there was no significant difference in the incidence of AEs between these two groups, lower incidence of adverse events was mentioned in the weekly cisplatin group. Our study suggests that interruption of CCRT is an independently poor prognostic factor of OS, and that completion of CCRT without interruption is more important than the choice of chemotherapeutic regimen for patients with synchronous ESCC/HNSCC. View Full-Text
Keywords: chemotherapy; synchronous; head and neck cancer; esophageal cancer; concurrent chemoradiotherapy chemotherapy; synchronous; head and neck cancer; esophageal cancer; concurrent chemoradiotherapy
►▼ Show Figures 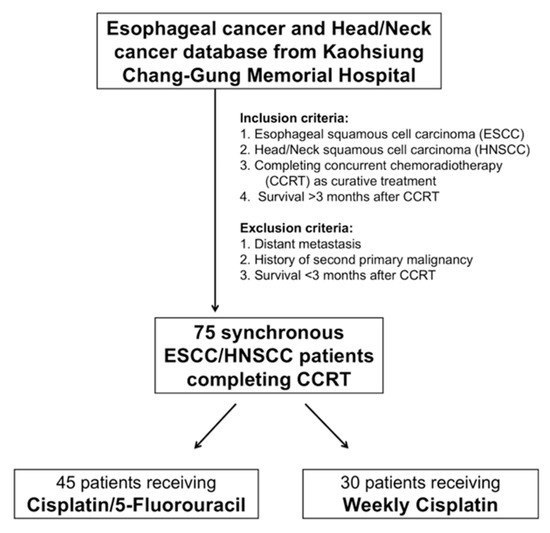