Dry Eye Disease: A Review of Epidemiology in Taiwan, and its Clinical Treatment and Merits
Next Article in Special Issue

Long-Term Neurodevelopmental Outcome in Twin-to-Twin Transfusion Syndrome: Is there still Room for Improvement?

Despite many developments in its management, twin-to-twin transfusion syndrome (TTTS) remains an important risk factor for long-term neurodevelopmental impairment (NDI). Our objective was to compare the incidence of severe NDI in a recent cohort of TTTS survivors, treated with laser surgery from 2011 to 2014, with a previous cohort treated from 2008 to 2010. Neurological, cognitive, and motor development were assessed at two years of age. We determined risk factors associated with Bayley-III scores. Severe NDI occurred in 7/241 (3%) survivors in the new cohort compared to 10/169 (6%) in the previous cohort (p = 0.189). Disease-free survival (survival without severe impairment) did not significantly differ. Low birth weight and being small for gestational age (SGA) were independently associated with lower cognitive scores (both p < 0.01). Severe cerebral injury was related to decreased motor scores (B = −14.10; 95% CI −3.16, −25.04; p = 0.012). Children with severe NDI were born ≥32 weeks’ gestation in 53% of cases and had no evidence of cerebral injury on cranial ultrasound in 59% of cases. Our results suggest that improvement in outcome of TTTS has reached a plateau. Low birth weight, SGA, and cerebral injury are risk factors for poor neurodevelopmental outcome. Neither gestational age above 32 weeks nor the absence of cerebral injury preclude severe NDI. View Full-Text
Keywords: twin-to-twin transfusion syndrome; long-term outcome; neurodevelopmental impairment; fetoscopic laser surgery; risk factors twin-to-twin transfusion syndrome; long-term outcome; neurodevelopmental impairment; fetoscopic laser surgery; risk factors
►▼ Show Figures 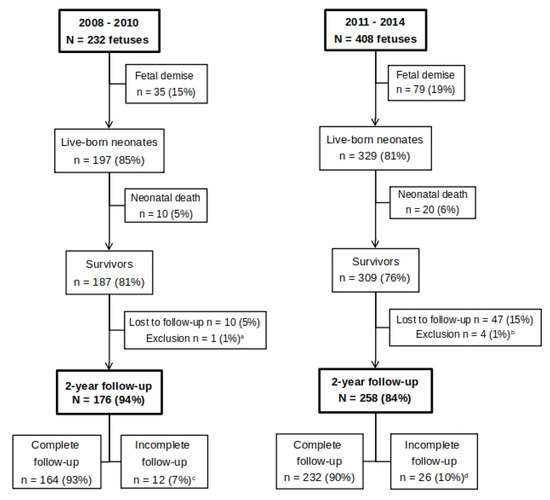