Visfatin Connection: Present and Future in Osteoarthritis and Osteoporosis

The Effect of Dietary Supplementation of Crocetin for Myopia Control in Children: A Randomized Clinical Trial

The prevalence of myopia has been increasing in recent years. The natural carotenoid crocetin has been reported to suppress experimental myopia in mice. We evaluated the effects of crocetin on myopia suppression in children. A multicenter randomized double-blind placebo-controlled clinical trial was performed with 69 participants aged 6 to 12 years, whose cycloplegic spherical equivalent refractions (SER) were between −1.5 and −4.5 diopter (D). The participants were randomized to receive either a placebo or crocetin and followed up for 24 weeks. Axial length (AL) elongation and changes in SER were evaluated for 24 weeks. Both written informed assent from the participants and written informed consent from legal guardians were obtained in this study because the selection criteria of this trial included children aged between 6 and 12 years old. This trial was approved by the institutional review boards. A mixed-effects model was used for analysis, using both eyes. Two participants dropped out and 67 children completed this trial. The change in SER in the placebo group, −0.41 ± 0.05 D (mean ± standard deviation), was significantly more myopic compared to that in the crocetin group, −0.33 ± 0.05 D (p = 0.049). The AL elongation in the placebo group, 0.21 ± 0.02 mm, was significantly bigger than that in the crocetin group, 0.18 ± 0.02 mm (p = 0.046). In conclusion, dietary crocetin may have a suppressive effect on myopia progression in children, but large-scale studies are required in order to confirm this effect. View Full-Text
Keywords: crocetin; supplement; myopia; axial length; refraction; myopia progression control; randomized double-blind placebo-controlled trial crocetin; supplement; myopia; axial length; refraction; myopia progression control; randomized double-blind placebo-controlled trial
►▼ Show Figures 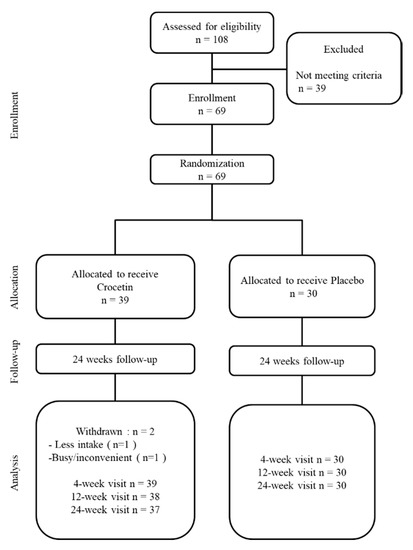