Outpatient Readmission in Rheumatology: A Machine Learning Predictive Model of Patient’s Return to the Clinic

Our objective is to develop and validate a predictive model based on the random forest algorithm to estimate the readmission risk to an outpatient rheumatology clinic after discharge. We included patients from the Hospital Clínico San Carlos rheumatology outpatient clinic, from 1 April 2007 to 30 November 2016, and followed-up until 30 November 2017. Only readmissions between 2 and 12 months after the discharge were analyzed. Discharge episodes were chronologically split into training, validation, and test datasets. Clinical and demographic variables (diagnoses, treatments, quality of life (QoL), and comorbidities) were used as predictors. Models were developed in the training dataset, using a grid search approach, and performance was compared using the area under the receiver operating characteristic curve (AUC-ROC). A total of 18,662 discharge episodes were analyzed, out of which 2528 (13.5%) were followed by outpatient readmissions. Overall, 38,059 models were developed. AUC-ROC, sensitivity, and specificity of the reduced final model were 0.653, 0.385, and 0.794, respectively. The most important variables were related to follow-up duration, being prescribed with disease-modifying anti-rheumatic drugs and corticosteroids, being diagnosed with chronic polyarthritis, occupation, and QoL. We have developed a predictive model for outpatient readmission in a rheumatology setting. Identification of patients with higher risk can optimize the allocation of healthcare resources. View Full-Text
Keywords: musculoskeletal diseases; outpatient readmission; predictive model; random forest; quality of life musculoskeletal diseases; outpatient readmission; predictive model; random forest; quality of life
►▼ Show Figures 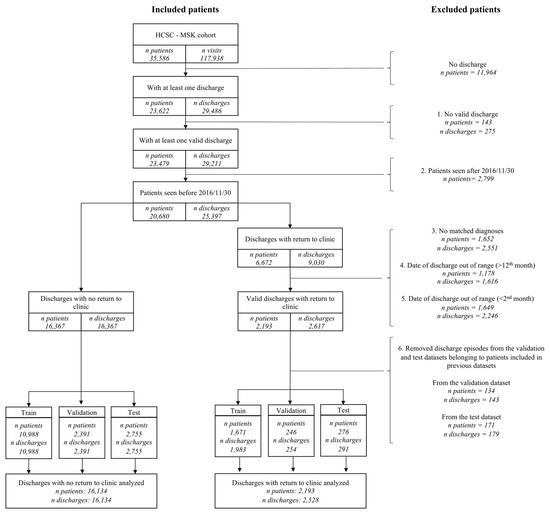