Analysis of the Effects of Day-Time vs. Night-Time Surgery on Renal Transplant Patient Outcomes
Previous Article in Journal

Potential Role of the Microbiome in Acne: A Comprehensive Review
Previous Article in Special Issue

Urinary tract infection (UTI), frequently caused by uropathogenic Escherichia coli (UPEC), is the most common infection after kidney transplantation (KTx). Untreated, it can lead to urosepsis and impairment of the graft function. We questioned whether the UPEC isolated from KTx patients differed from the UPEC of non-KTx patients. Therefore, we determined the genome sequences of 182 UPEC isolates from KTx and control patients in a large German university clinic and pheno- and genotypically compared these two isolated groups. Resistance to the β-lactams, trimethoprim or trimethoprim/sulfamethoxazole was significantly higher among UPEC from KTx than from control patients, whereas both the isolated groups were highly susceptible to fosfomycin. Accordingly, the gene content conferring resistance to β-lactams or trimethoprim, but also to aminoglycosides, was significantly higher in KTx than in control UPEC isolates. E. coli isolates from KTx patients more frequently presented with uncommon UPEC phylogroups expressing higher numbers of plasmid replicons, but interestingly, less UPEC virulence-associated genes than the control group. We conclude that there is no defining subset of virulence traits for UPEC from KTx patients. The clinical history and immunocompromised status of KTx patients enables E. coli strains with low uropathogenic potential, but with increased antibiotic resistance to cause UTIs. View Full-Text
Keywords: Uropathogenic E. coli; UPEC; phylogeny; genomics; antibiotic resistance; virulence traits; kidney transplantation Uropathogenic E. coli; UPEC; phylogeny; genomics; antibiotic resistance; virulence traits; kidney transplantation
►▼ Show Figures 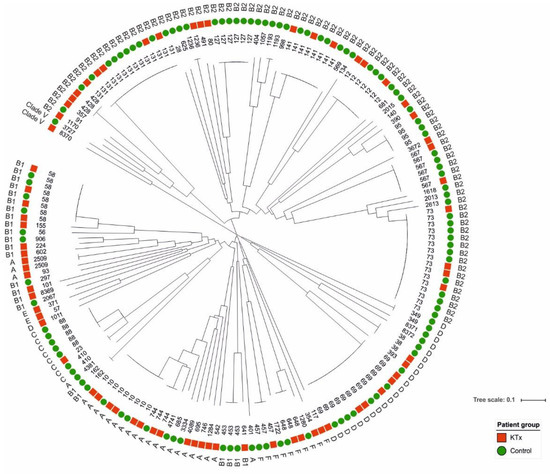