Potential Role of the Microbiome in Acne: A Comprehensive Review

Acne is a highly prevalent inflammatory skin condition involving sebaceous sties. Although it clearly develops from an interplay of multiple factors, the exact cause of acne remains elusive. It is increasingly believed that the interaction between skin microbes and host immunity plays an important role in this disease, with perturbed microbial composition and activity found in acne patients. Cutibacterium acnes (C. acnes; formerly called Propionibacterium acnes) is commonly found in sebum-rich areas and its over-proliferation has long been thought to contribute to the disease. However, information provided by advanced metagenomic sequencing has indicated that the cutaneous microbiota in acne patients and acne-free individuals differ at the virulent-specific lineage level. Acne also has close connections with the gastrointestinal tract, and many argue that the gut microbiota could be involved in the pathogenic process of acne. The emotions of stress (e.g., depression and anxiety), for instance, have been hypothesized to aggravate acne by altering the gut microbiota and increasing intestinal permeability, potentially contributing to skin inflammation. Over the years, an expanding body of research has highlighted the presence of a gut–brain–skin axis that connects gut microbes, oral probiotics, and diet, currently an area of intense scrutiny, to acne severity. This review concentrates on the skin and gut microbes in acne, the role that the gut–brain–skin axis plays in the immunobiology of acne, and newly emerging microbiome-based therapies that can be applied to treat acne. View Full-Text
Keywords: acne; microbiota; microbiome; skin; gut; brain; therapeutic implications acne; microbiota; microbiome; skin; gut; brain; therapeutic implications
►▼ Show Figures 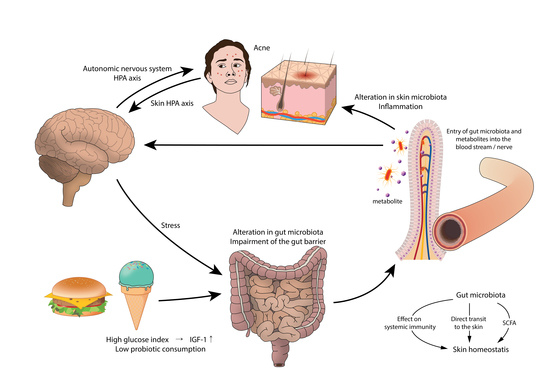