A cross-sectional study was conducted on a representative sample of pregnant women attending the 20th-week scan at the outpatient clinics of a public university hospital in the city of Seville (Spain).

The participants included 426 pregnant women in their 20th week of pregnancy (the desired sample size was 400). The data were collected through structured face-to-face interviews conducted by trained health professionals, using an ad hoc anonymous questionnaire.
The sample was obtained by randomly selecting one out of every two pregnant women who were coming in for their 20th-week pregnancy ultrasound at the outpatient clinics of the university hospital during a five-month period in 2016. To be eligible for inclusion, women should be aged 16 years and over, be able to read and speak Spanish fluently, and complete an informed consent form.
The population in the geographical area served by this public hospital is quite similar to the average Andalusian population, in terms of the percentage of women in reproductive age (43.1% and 43.6%, respectively), work activity rates among women (49.2% vs. 49.0%), unemployment rates (20.8% vs. 18.7%), and education level (e.g., the percentage of women with low level of studies was 23.4% in the study area and 24.0% in Andalusia, according to the 2011 population census). Thus, educational level and employment situation of the sample is quite similar among women in this specific age period in the region [29].

Before starting the survey, the study protocol and the questionnaire were approved by the Clinical Research Ethics Committee of University Hospital Virgen Macarena (Research code: ICG15/ Internal code: 0254N-15).
Prior to the interview, the participants were all provided with an informed consent form, which included information about the purpose of the study and the voluntary nature of their participation, as well as the guarantees for privacy and confidentiality and how their information would be handled anonymously. The participants gave their informed consent by signing and returning this form. The Helsinki declaration of 1975 and its subsequent amendments were respected.

In order to gather the data, a customized questionnaire was designed by the research team, taking into account their professional experience as health providers as well as their personal experience in previous research on lifestyle and risk perception. A few questions (those regarding alcohol consumption patterns) were selected from the Alcohol Use Disorders Identification Test (AUDIT) [32]. Most of the questions of the questionnaire contained fixed choice response options, but included a final option for “other response”, where the interviewer could note down all the spontaneous answers given by pregnant women that apparently did not fit with the established categories. The transcription of these notes was later studied by the research team, in order to decide whether they could be adapted to any of the foreseen answer categories or they should be considered as a different category. In addition, some questions of the questionnaire were open-ended and participants’ responses were recorded via note-taking. For these questions, the categories were created after data collection, based on a thematic analysis of participants’ responses, and the response of each interviewee was then coded according to this categorization. The questionnaire was piloted in order to verify that all questions were understandable and to consider whether new response categories in specific questions should be added.

First, a univariate analysis of all the study variables was performed, evaluating the percent distribution of the various response categories. Second, differences in beliefs and in the self-reported frequency of alcohol consumption were analyzed as a function of demographic variables, applying χ2 tests and linear-by-linear tests to the corresponding contingency tables. Third, applying these same tests, the relationship between the participants’ beliefs about the risk of alcohol consumption and their own consumption of alcohol was examined. These analyses were all performed using SPSS 21.0. Fourth, a path analysis was tested on the basis of the associations between variables observed in the previous analyses. In order to test the overall data fit of the model, χ2, CFI, and RMSEA were examined. The Lagrange multipliers test was conducted to improve the global fit of the model based on the modifications that were introduced. R2 was calculated to estimate how much of the variance of the study variables was explained by the model. This model was developed and tested using the EQS 6.3 statistical program.

3.1. Descriptive Characteristics of the Sample

Out of a total of 1664 pregnant women who received care in these outpatient clinics throughout the data collection period, half of them (832) were asked to participate in the study and 426 (51.2%) agreed to participate. More than 90% of the participants (92.2%) had been born in Spain. Their mean age was 31.9 years (SD = 5.3).
Table 1 shows the characteristics of the sample by age, educational level, employment status, relationship status, and number of pregnancies, including the current one. Most participants were aged 31 years and over (64.3%) and almost all (98.1%) reported being in a relationship at the time of data collection. With respect to the level of education, a significant percentage of the women (45.5%) had medium level of studies, while more than a third reported university studies. Women who were employed full time were 39% of the sample, while 28% reported being unemployed. Finally, this was the first pregnancy for around 40% of the participants.

Three quarters of the women surveyed (75.4%) reported that they had not consumed any alcoholic beverages “during the last 4 or 5 months”, a period which presumably coincides with the amount of time that they have been pregnant, since they were, on average, in their 20th week of pregnancy. Of those who did report having consumed alcohol during said period, the most frequent response was “once a month or less” (14.6%). Only 1.2% reported drinking alcohol “2 to 3 times a week” (Table 1).

3.3. Beliefs about the Risks of Alcohol Consumption during Pregnancy

Based on participants’ responses, some categories were generated to analyze beliefs about risks. Almost half (48%) of the pregnant women indicated that consuming alcohol during pregnancy implied some risk for the baby. A significant percentage (42.6%) said that it involved a risk to both the baby and themselves, and 6.6% responded that it did not involve a risk when consumed in moderate quantities, or only when abused (Table 2).
When those women who did believe that it involved a risk were asked to specify, in their opinion, the type of risk involved, 27.1% responded that they did not know and failed to specify any risk. In turn, the problems mentioned most frequently by those who did specify types of risks were: “congenital malformations, spontaneous or induced abortion” (72.9%) and the generic term of “developmental problems for the baby” (24.6%). Only 2.5% of the women mentioned the risk of premature birth.
When the women who did indicate specific risk types were then asked how long they thought that the harmful effects derived from consuming alcohol during pregnancy could last, 48.1% indicated that the harmful effects were life-long, while 15.5% mentioned relatively brief time periods (the duration of the pregnancy, the birth, or the first years of life). Approximately one quarter of the women (27.5%) said they did not know how long the sequelae from alcohol consumption during pregnancy could last.
When questioned about the risk perception of alcohol consumption during pregnancy in terms of the amount of alcohol consumed and the frequency of consumption, 69.7% of the women responded that any alcohol consumption was harmful. Conversely, only 0.4% of the participants said that drinking as much and as often as a person wants to drink is not harmful. In turn, 3.9% felt that “a small amount every day is not harmful”.
When asked specifically about the risks involved in consuming beer or wine during pregnancy, the percentage of women who said that “any amount consumed during the pregnancy is harmful” was about half of those who gave the same response when asked about alcohol consumption in general (31.5% for beer and 38.4% for wine). On the other hand, the percentage who felt that “drinking a small amount every day is not harmful”, was 14.8% for beer and 5.9% for wine. Yet when asked the same question specifically about distilled beverages, the percentage who responded that “any amount consumed during pregnancy is harmful” jumped to 88%, and the percentage who said that “drinking a small amount every day is not harmful” dropped down to 1.9%.

3.4. Sociodemographic Differences in Beliefs about the Risks of Alcohol Consumption during Pregnancy

3.5. Differences in Self-Reported Alcohol Consumption as a Function of Educational Level

3.6. Differences in the Frequency of Alcohol Consumption during Pregnancy as a Function of Risk Perception

I.C.-G., F.L.-L., D.G.-B. and R.M. conceived and designed the study. I.C.-G., F.L.-L. and R.M. coordinated the data collection. D.G.-B. was responsible for the data analysis. All authors interpreted the results, drafted, reviewed, and approved the final version of the article. 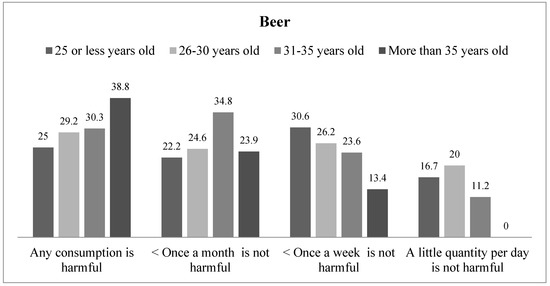 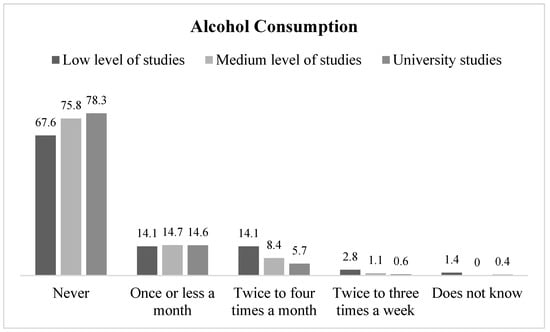 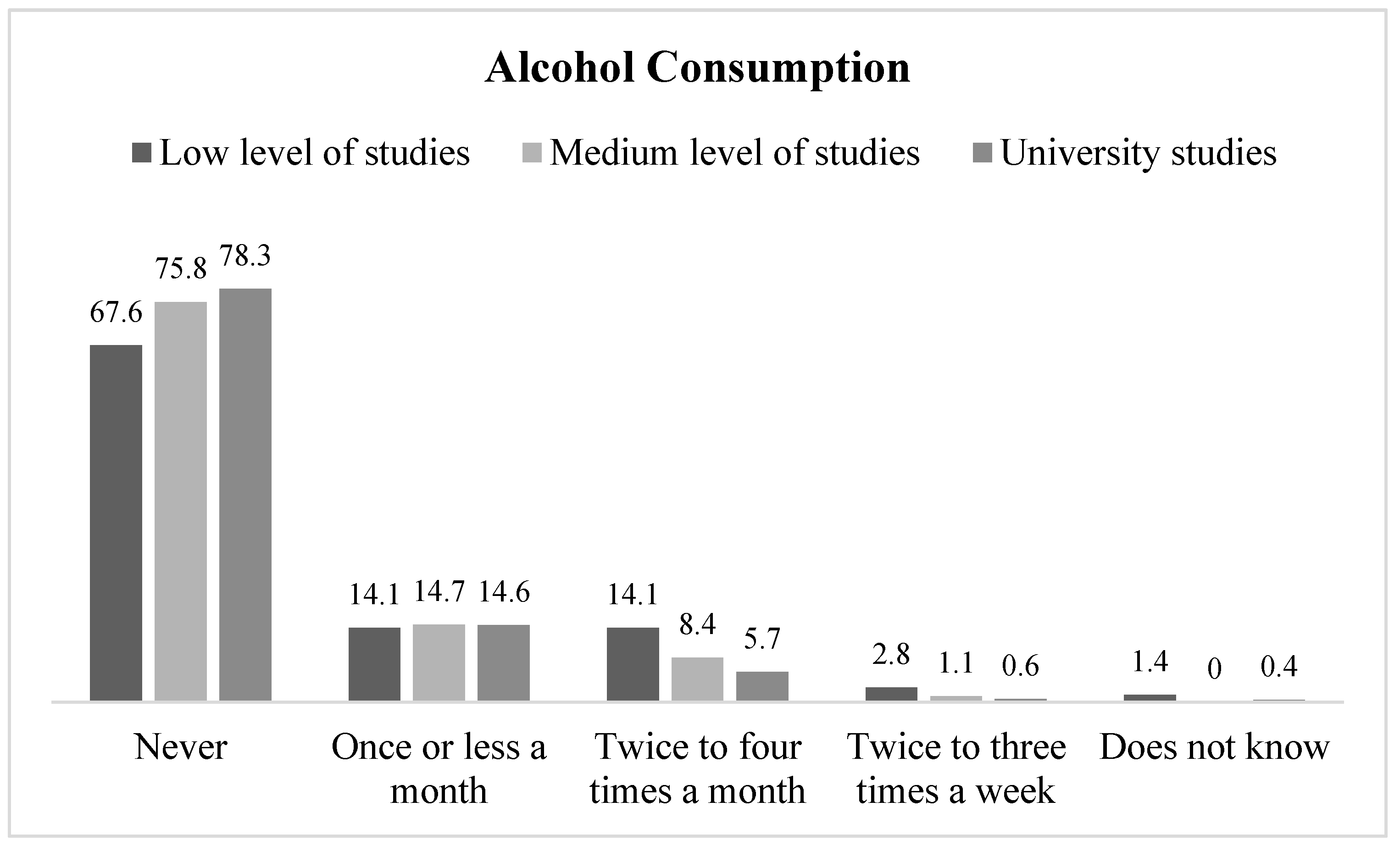 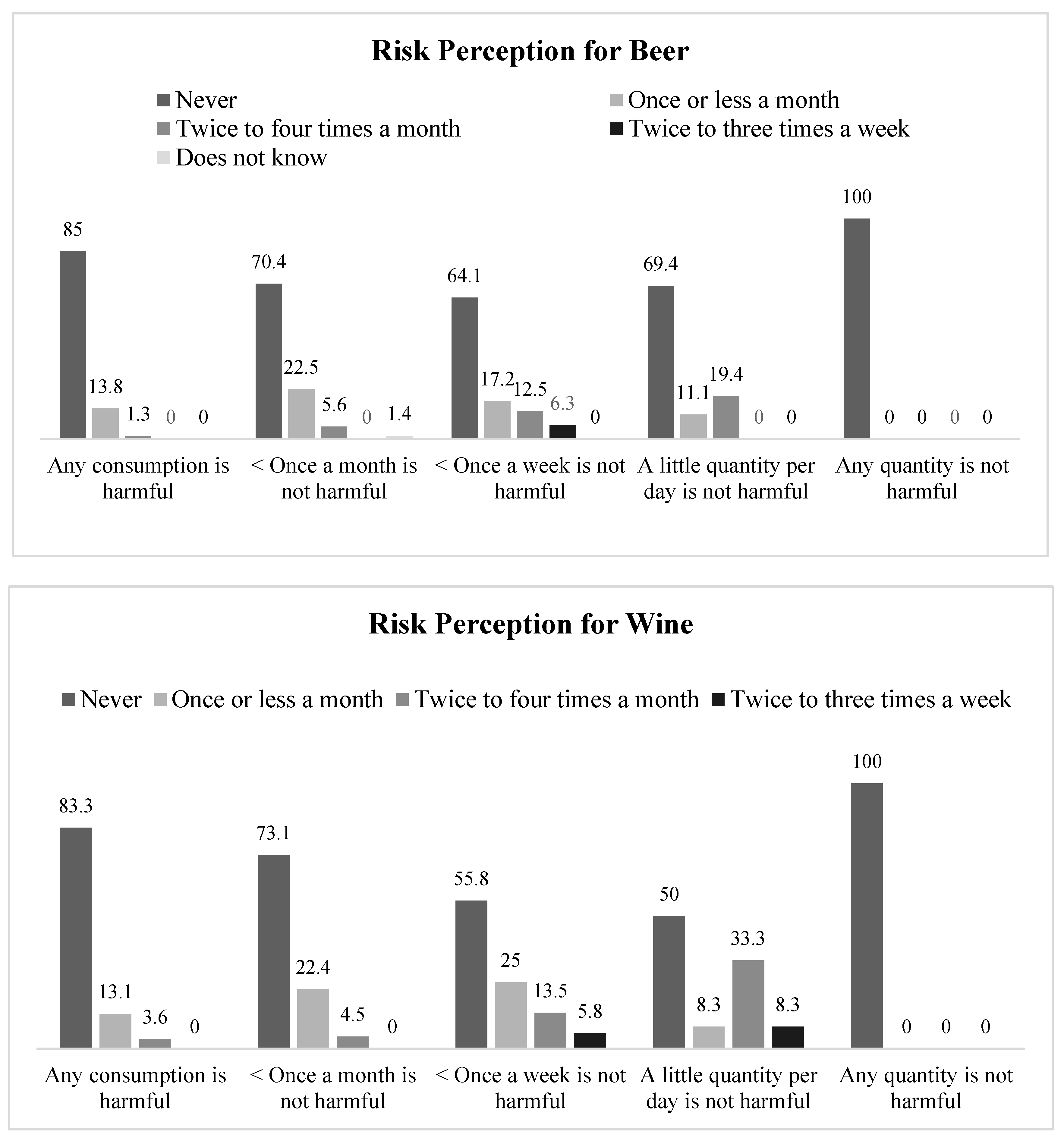 Table 2. Risk perception of alcohol consumption during pregnancy.
Table 2. Risk perception of alcohol consumption during pregnancy.
© 2019 by the authors. Licensee MDPI, Basel, Switzerland. This article is an open access article distributed under the terms and conditions of the Creative Commons Attribution (CC BY) license (http://creativecommons.org/licenses/by/4.0/).
We use cookies on our website to ensure you get the best experience. Read more about our cookies here.
Accept
We have just recently launched a new version of our website. Help us to further improve by taking part in this short 5 minute survey here. here.
Never show this again