Recent Trends in the Quantification of Biogenic Amines in Biofluids as Biomarkers of Various Disorders: A Review
Previous Article in Special Issue

Brain Network Organization Correlates with Autistic Features in Preschoolers with Autism Spectrum Disorders and in Their Fathers: Preliminary Data from a DWI Analysis

Background: Cranio-facial anomalies frequently occur in neurodevelopmental disorders because both face and brain are derived from neuroectoderm. The identification of differences in the facial phenotype of children with Autism Spectrum Disorders (ASD) may reflect alterations in embryologic brain development in children with ASD. Methods: we evaluated 33 caucasian children with ASD using a 2D computerized photogrammetry. Anthropometric euclidean measurements and landmarks located on the soft tissue of the face and head, were based on five cranio-facial indexes. Relationships between anthropometric z-scores and participant characteristics (i.e., age, Global IQ, severity of autistic symptoms measured using the CARS checklist) were assessed. Results: Cephalic index z-score differed significantly from 0 in our ASD group (p = 0.019). Moreover, a significant negative correlation was found between Facial Index z-score and CARS score (p = 0.003); conversely, a positive correlation was found between Interchantal Index z-score and CARS score (p = 0.028). Conclusion: our measurements shows a dolichocephalic head shape which is not correlated with autism severity. Importantly, two craniofacial markers were significantly correlated with autism severity: increased orbital hyperthelorism and decrease of height of the facial midline. These data support previous findings of craniofacial anomalies in autism spectrum disorder suggesting an “ASD facial phenotype” that could be used to improve ASD diagnoses.
Keywords: autism spectrum disorders; morphology; neurodevelopment autism spectrum disorders; morphology; neurodevelopment

The neurodevelopmental model of autism spectrum disorders (ASD), postulates that the etiological origins of the disease can be traced to events in the prenatal period. In support of this neurodevelopmental model, higher rates of dysmorphic features, such as minor physical anomalies (MPAs) have been suggested as risk factors for autism and, correspondingly, as sensitive physical indicators of embryonic development [1,2,3].
MPAs are neurodevelopmental markers which manifest as unusual morphological features of the face or physique. MPAs can manifest as early as the first or early second trimester, and have consistently been linked to a biological vulnerability, which continues into adolescence and young adulthood. [2,4,5]
Autism spectrum disorders (ASDs) result from alterations in the embryological brain, suggesting that atypical development of the face or physique in ASD children, may result in subtle physical differences compared to typically developing children. MPAs remain stable over time and can be studied efficiently from early childhood onwards [1,3].
MPAs reported in ASD have been observed across multiple areas of the body, including the head, hands, and feet [3,4,5].
Rodier et al. [1] studied the frequency of individual MPAs in ASD and found that posterior rotation of the ear was more common in children with autism compared to the general population, as well as compared to children with developmental delays. Mixed results have been found for anomalies such as a high-arched palate and hyper-hypotelorism [3,4,5,6].
Of particular note, reoccurrence of anomalies in the craniofacial region suggests there may be facial characteristics related to subpopulations of ASD. Previous studies [6,7] on ASD face shapes, have shown that facial morphology differed significantly, between ASD and typically developing boys, and identified subsets of ASD boys, with distinctive craniofacial morphology. Specifically, decreased height of facial midline and long mouth widths were prevalent amongst individuals with ASD, with comorbid intellectual disability and greater severity of ASD symptoms. This could suggest an “ASD facial phenotype” representing a new physical biomarker that could be used to improve ASD diagnosis.
The face and brain are inherently linked in utero; their tissues share common origins, and develop in close coordination as a result of their physical adjacency and reciprocal molecular signalling [8]. Anthropometric photographic measurements represent an objective and quantitative methodology to characterize craniofacial MPAs in children with ASD. Additionally, photogrammetry can be used to detect generalized dysmorphology, in children who are often clinically difficult to examine [4].
The aim of the present study was to investigate the topographical pattern of cranio-facials anomalies in ASD children, and to determine whether these anomalies would correlate with intensity of ASD symptoms and overall functioning. More generally, assessment of MPAs may assist in the diagnostic protocol for neurodevelopmental disorders.

A total of 33 pre-pubertal children with ASD (28 males), between 4 and 12 years of age, were recruited by a specialized multidisciplinary team at Tours University Hospital (Tours, France). Ethical approval was obtained from the Ethics Committee of the Tours University Hospital. The study was performed in accordance with basic principles of the Declaration of Helsinki. An extensive, multidisciplinary child neuro-psychiatric assessment was carried out for each subject. Assessment consisted of a preliminary developmental history, medical examination and neuropsychological assessment. All subjects met the ICD-10 criteria for pervasive developmental disorders (PDD) according to the World Health Organization’s (WHO) International Classification of Diseases, 10th edition ICD-10). The sample consisted of Caucasian children of European origin, as normative physical data have been well-defined in the Caucasian population [9,10].
ASD was diagnosed using standardized diagnostic tools (mean age at assessment: 7.6 years; standard deviation SD: 2.2). The sample of ASD children included those who met diagnostic criteria for; childhood autism (F84.0, n = 22), atypical autism; (F84.1, n = 9), Asperger’s Syndrome (F84.5, n = 2) and other PDD (F84.9, n = 1). For inclusion, children were also required to score above threshold on all three domains of the ADI-R [11]. One child classified as having PDD not otherwise specified on the ADI-R (below threshold on 1 domain by 1 point) was also included. The intensity of ASD symptomatology was determined using the Childhood Autism Rating Scale (CARS) [12]. The CARS evaluates the severity of autistic behaviors in 14 functional areas by assigning a score from 1 to 4. An overall score is calculated by adding scores from all functional areas. It enables the assessment of severity of autistic symptoms, and the stratification of patients into three levels: “severely autistic” (score between 37 and 60), “mildly to moderately autistic” (score between 30 and 36.5), and “absence of ASD” (score less than 30). The questionnaire can be carried out in around 20–30 min.
Intellectual functioning was evaluated using the Weschler Abbreviated Intelligence Scale-III, (WAIS III) [13], allowing a global Intellectual Quotient (IQ), a non-verbal IQ (performance IQ) and a verbal IQ to be obtained for all ASD children.
In the routine course of evaluation, all ASD children received a comprehensive physical examination, to exclude the presence of a clinically detectible genetic syndrome associated with gross dysmorphic features and autistic-like symptoms. The examination was conducted by a pediatric team, in the same hospital site, examiners were blind to group status. Others exclusion criteria included clinical diagnosis of a co-morbid psychiatric or medical condition such as epileptic seizures or history of head injury.
Written informed consent was obtained from the parents or guardians of each participant.

Cranio-facial examination of the ASD group employed a mixed approach of computerized photogrammetry and classic anthroposcopy. The examination was conducted by the same author (GT). Photographs were obtained using a high-resolution digital camera. The Euclidean measurements, based on anthropometric landmarks and 2D photogrammetric examinations, were obtained using image analysis software (FlashCAD®, Digitarch srl, Rome, Italy) [4]. Standardized cranio-facial photographs were taken with the camera lens aligned with the subject’s Frankfort horizontal plane [14]. An internal measure of scale (adhesive paper sticker) was placed on the glabella landmark for the frontal view, and on the condylion of the mandible for the profile view.
Subjects were encouraged to adopt a standardized expression: relaxed, not smiling, gently closed lips, eyes wide open. Spectacles were removed. After ensuring the participant was comfortable and able to sit still, collection of the images began. Multiple pictures of each child were taken to ensure that the image used for analysis adequately captured all of the facial areas required for landmarking.
Anthropometric linear measurements and landmarks (Figure 1) on the soft tissue of the face and head, were based on five cranio-facial indexes, borrowed from the works of Farkas et al. [10] We selected cranio-facial indexes which required any Geodesic measurements (Table 1), due to previous findings that identification of facial phenotypes is independent from measurements type (Euclidean Vs Geodesic) [7].
Each skull-facial index was compared with the tables of anthropometric norms for Caucasian subjects, developed by Farkas et al. [10]. This enabled computation of z-scores. A synthesis of anthropometric characteristics of the sample is shown in Table 2.

G.T. conceived the study and wrote manuscript. S.R. analyzed the data. D.M. and L.M., drafted it with important statistical and intellectual content, P.G. collected data and reviewed the manuscript. F.B.-B. and M.R. final approval of the version to be published. All authors read and approved the final manuscript.

We would like to thank all of the families that made this research possible. This research did not receive funds for covering the costs of publishing in open access. 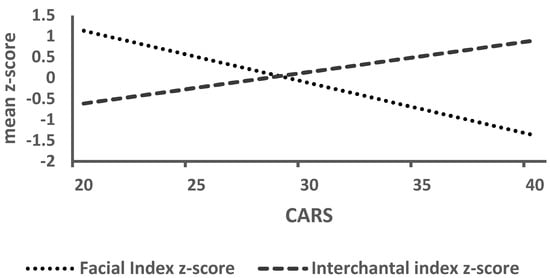 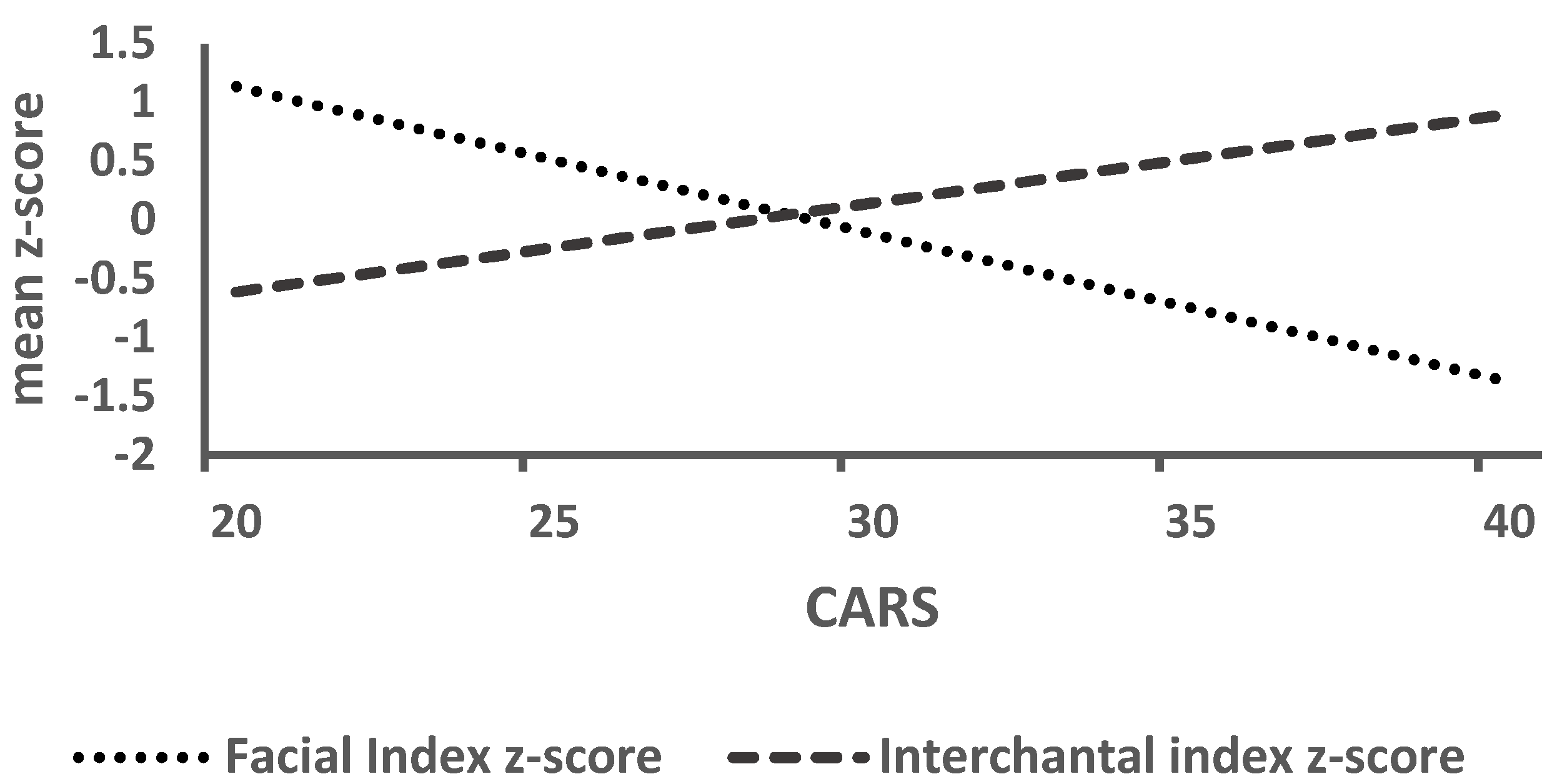