CA125 as a Marker of Heart Failure in the Older Women: A Population-Based Analysis

(1) Background: Cancer antigen 125 (CA125) is a glycoprotein that is expressed by tissue derived from coelomic epithelium in the pleura, peritoneum, pericardium. It has been shown that CA125 concentrations are correlated with NT-proBNP in older people with congestive heart failure (HF). We conducted a study on the association between concentrations of CA125 and NT-proBNP in a population-based cohort of older Polish women. (2) Methods: The current research is sub-study of a large, cross-sectional research project (PolSenior). The study group consisted of 1565 Caucasian women aged 65–102 years. To assess the relationship between CA125 and other variables a stepwise backward multivariate normal and skew-t regression analyses were performed. (3) Results: The median of CA125 concentration was 13.0 U/mL and values over the upper normal range limit (35 U/mL) were observed in 5.1% (n = 79) of the study cohort. The concentration of CA125 was positively related to age, hospitalization for HF and history of atrial fibrillation and chronic obstructive pulmonary disease, levels of NT-proBNP, IL-6, hs-CRP and triglycerides. We found in the multivariate analyses, that increased CA125 levels were independently associated with log10 (IL-6) (β = 11.022), history of hospitalization for HF (β = 4.619), log10 (NT-proBNP) (β = 4.416) and age (β = 3.93 for 10 years). (4) Conclusions: Despite the association between CA125 and NT-proBNP, the usefulness of CA125 for the detection of HF in older women is limited by factors such as inflammatory status and age.
Keywords: carbohydrate antigen-125; heart failure; inflammatory marker; older women carbohydrate antigen-125; heart failure; inflammatory marker; older women

Cancer antigen 125 (CA125) is a glycoprotein that is expressed by tissue derived from coelomic epithelium and has a molecular weight estimated to range from 110 to more than 2000 kD [1]. The CA125 serum level has been shown to be increased in women with ovarian cancer and less often in breast [2], lung [3] and gastrointestinal cancers [4]. However, it is not a screening test for malignancies as it may also be elevated in a variety of benign conditions (such as pregnancy, endometriosis, uterine leiomyomata, pelvic inflammatory disease, cirrhosis, peritonitis, pleuritis, pancreatitis, and tuberculosis) [5].
Several recent studies have shown that serum CA125 levels are also elevated in heart failure (HF), atrial fibrillation (AF), and ischemic heart disease [6,7,8]. Only a few studies that have assessed the CA125 levels in selected groups of patients after cardiac surgery (cardiac transplantation, transcatheter aortic valve implantation) have been published so far [9,10]. It seems that neurohormonal and inflammatory activation, as well as increased central venous volume and congestion, are factors that increase the level of CA125 [11,12].
It is worth noting that the serum concentration of CA125 was associated with the severity of clinical conditions and poor short-term prognosis in patients with cardiovascular disease [13]. Ma et al. [14] showed a significant correlation between serum concentration of CA125 and the clinical status of patients aged 85 and older with congestive HF as well as the usefulness of CA125 as a prognostic factor of death and rehospitalization. Moreover, Yucel et al. [15] reported that the serum concentration of CA125 may be used to predict AF in patients with systolic HF. In addition, a significant correlation between CA125 and NT-proBNP levels was found in Chinese older patients only with congestive HF. Moreover, it should be noted that this group included only less than 16% of women [14]. It is well known that the clinical course of cardiovascular diseases differs between men and women [16], thus the separate analysis of biomarkers and risk factors in men and women seems reasonable. Furthermore, the impact of chronic diseases and inflammatory markers on CA125 levels in a population-based cohort has not been studied, yet.
The main aim of this study was to assess the relationships between the serum concentration of CA125 and NT-proBNP in a population-based cohort of older Polish women.

The current study was part of the PolSenior project, which was a large, cross-sectional, multicenter, interdisciplinary research project performed among the older Polish adult population (4979 respondents aged 65 and older, including 2412 women). Only women aged 65 and older with an assessed serum level of CA125 (n = 1951) were included in this sub-study. The exclusion criteria were as follow: (1) history of neoplastic disease (n = 125), (2) hepatitis B virus or hepatitis C virus infection (n = 52), (3) lack of information about the cardiovascular disease (n = 158), (4) lack of NT-pro BNP assessment (n = 51). Finally, the study group consisted of 1565 older Polish women (Figure A1).
The PolSenior project consisted of three stages: (1) conducting a health and socioeconomic survey by nurses trained for this purpose nurses that included comprehensive geriatric assessment, (2) measurements of body mass, height, waist circumference and blood pressure, (3) the collection of blood and urine samples.
The study was approved by the Bioethics Committee of the Medical University of Silesia in Katowice (KNW/0022/KB1/38/II/08/10; KNW-6501-38/I/08). Before enrollment, written and informed consent was obtained from all subjects or their caregivers.

Hospitalization for HF and/or myocardial infarction, diagnosis of AF and/or coronary artery disease and/or chronic obstructive pulmonary disease (COPD), currently applied treatment and smoking status were collected from the questionnaire survey.
Diagnosis of diabetes was based on medical history, medication use, and fasting serum glucose above 125 mg/dL. Participants were considered to have hypertension if they had a mean systolic blood pressure (SBP) ≥140 mmHg and/or diastolic blood pressure (DBP) ≥90 mmHg or used antihypertensive medications [18].
The body mass index (BMI) was calculated as the weight (kg) divided by the square of the height (meters).
Estimated glomerular filtration rate (eGFR; mL/min/1.73 m2) was calculated according to the short MDRD (modification of diet in renal disease) formula.
The albumin-to-creatinine ratio (ACR; mg/g) was calculated as the urine albumin concentration divided by the urine creatinine concentration.
The homeostatic model assessment (HOMA-IR) was used to evaluate insulin resistance (fasting serum insulin (μU/mL) × fasting plasma glucose (mmol/L)/22.5). Insulin resistance was diagnosed if HOMA-IR was 2.5 or higher.

Statistical analyses were performed using STATISTICA 10.0 PL (TIBCO Software Inc, Palo Alto, CA, USA) and StataSE 12.0 (StataCorp LP, TX, USA). Statistical significance was set at a p-value below 0.05. All tests were two-tailed. Nominal and ordinal data were expressed as percentages, while interval data were expressed as a mean value ± standard deviation in the case of a normal distribution, or as median (lower quartile–upper quartile) in the event of data with a skewed or non-normal distribution. To assess the relationship between CA125 and other variables, a stepwise backward multivariate normal and skew-t regression analyses were used, due to the heavily skewed distribution of some variables. The range of serum CA125 concentration was shown with the histogram and was modelled with the kernel density plot with the Epanechnikov kernel function (Figure A2).

3.1. Characteristics of the Study Population

The median of CA125 serum concentration was 13.0 U/mL (lower and upper quartile: 9.72–17.60, range: 1.1–225.9 U/mL). CA125 levels over the upper normal range limit (35 U/mL) were found in 79 women (5.1%, see Figure A2).
In a univariate analysis serum concentration of CA125 was positively related to age, hospitalization for HF and history of AF and COPD as well as the serum levels of NT-proBNP, IL-6, hsCRP, and triglycerides (Figure 1). The CA125 concentration was inversely related to BMI, the concentration of HDL-cholesterol and eGFR values (Table 2). There was no association between CA125 concentration and the occurrence of diabetes, hypertension, coronary heart disease and history of myocardial infarction as well as used cardiac medication (Table 2).
To assess the factors affecting CA125 serum concentration, a multivariate stepwise backward skew-t regression model was used with independent factors selected based on univariate analyses, and the results are shown in Table 2. We found that increased concentration of CA125 was independently associated with log10 (Il-6) (β = 11.022), history of hospitalization for HF (β = 4.619), log10 (NT-proBNP) (β = 4.416) and age (β = 3,93 for 10 years), as shown in Figure 2.

Despite the association between CA125 and NT-proBNP, the usefulness of CA125 for the detection of HF in the older women is limited by factors such as inflammatory status and age.

This research was funded by Ministry of Science and Higher Education (Poland), No. PBZ-MEIN-9/2/2006. 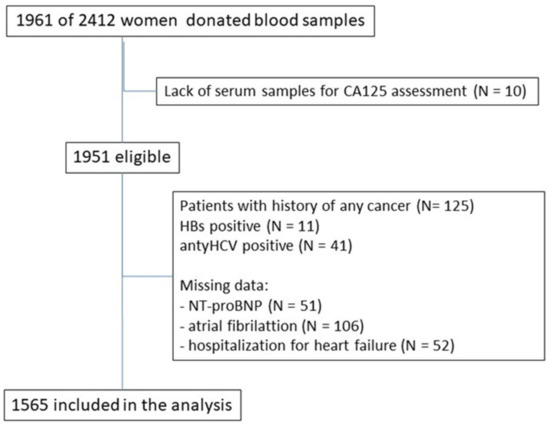 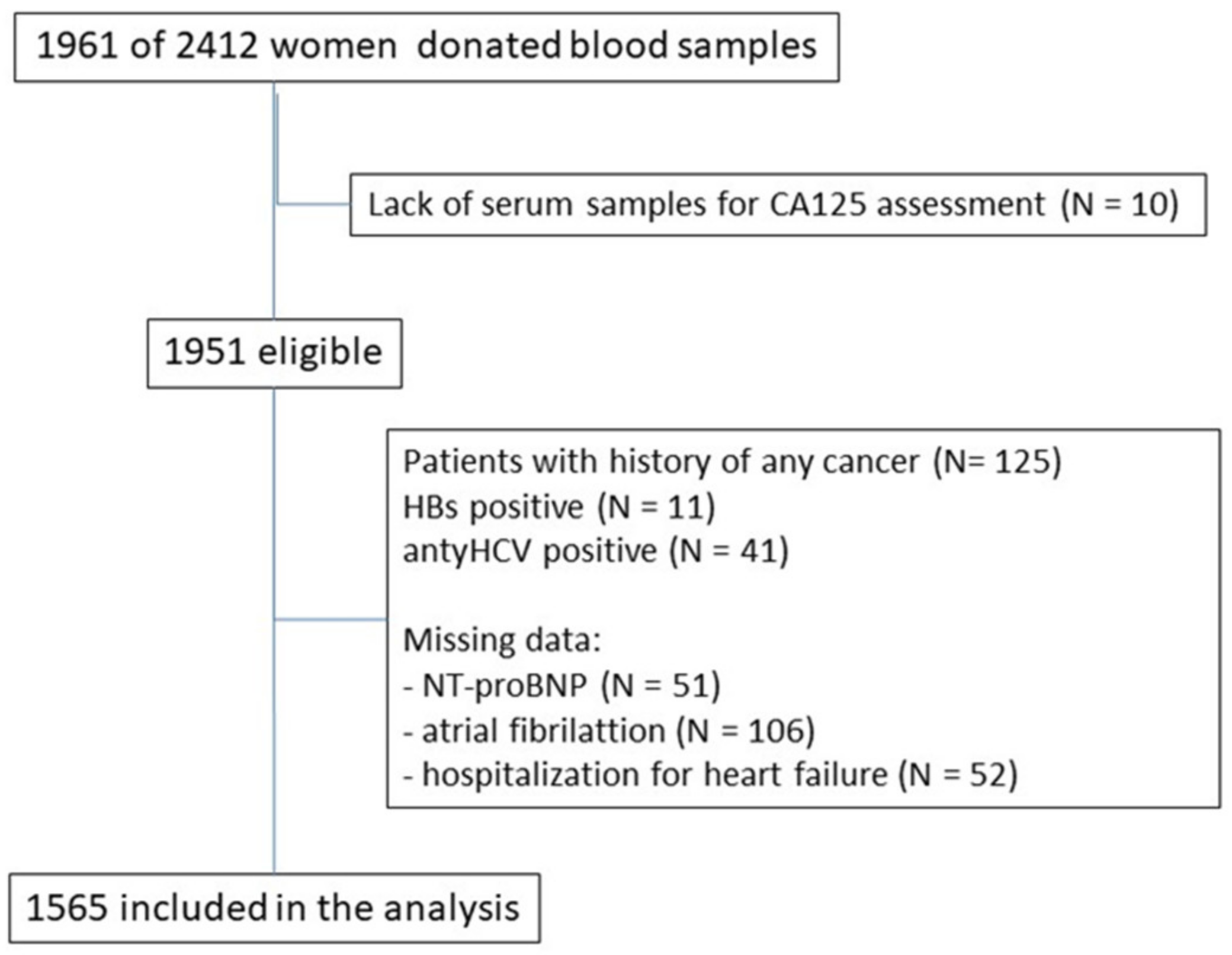 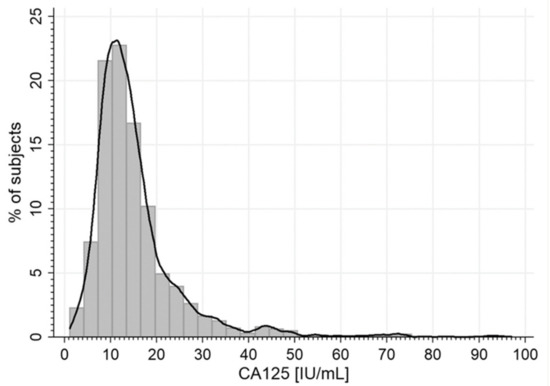 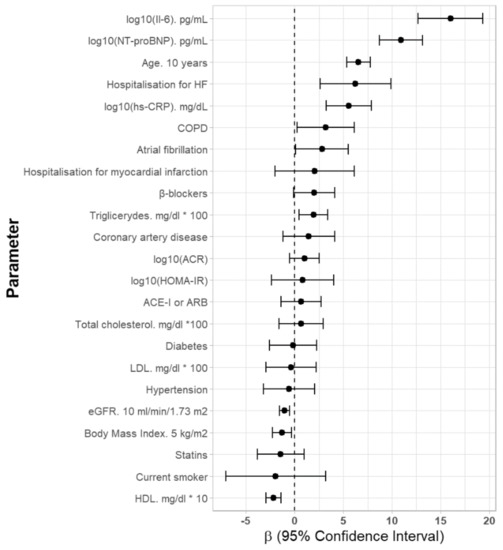 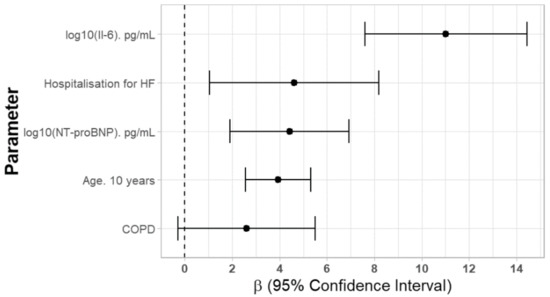 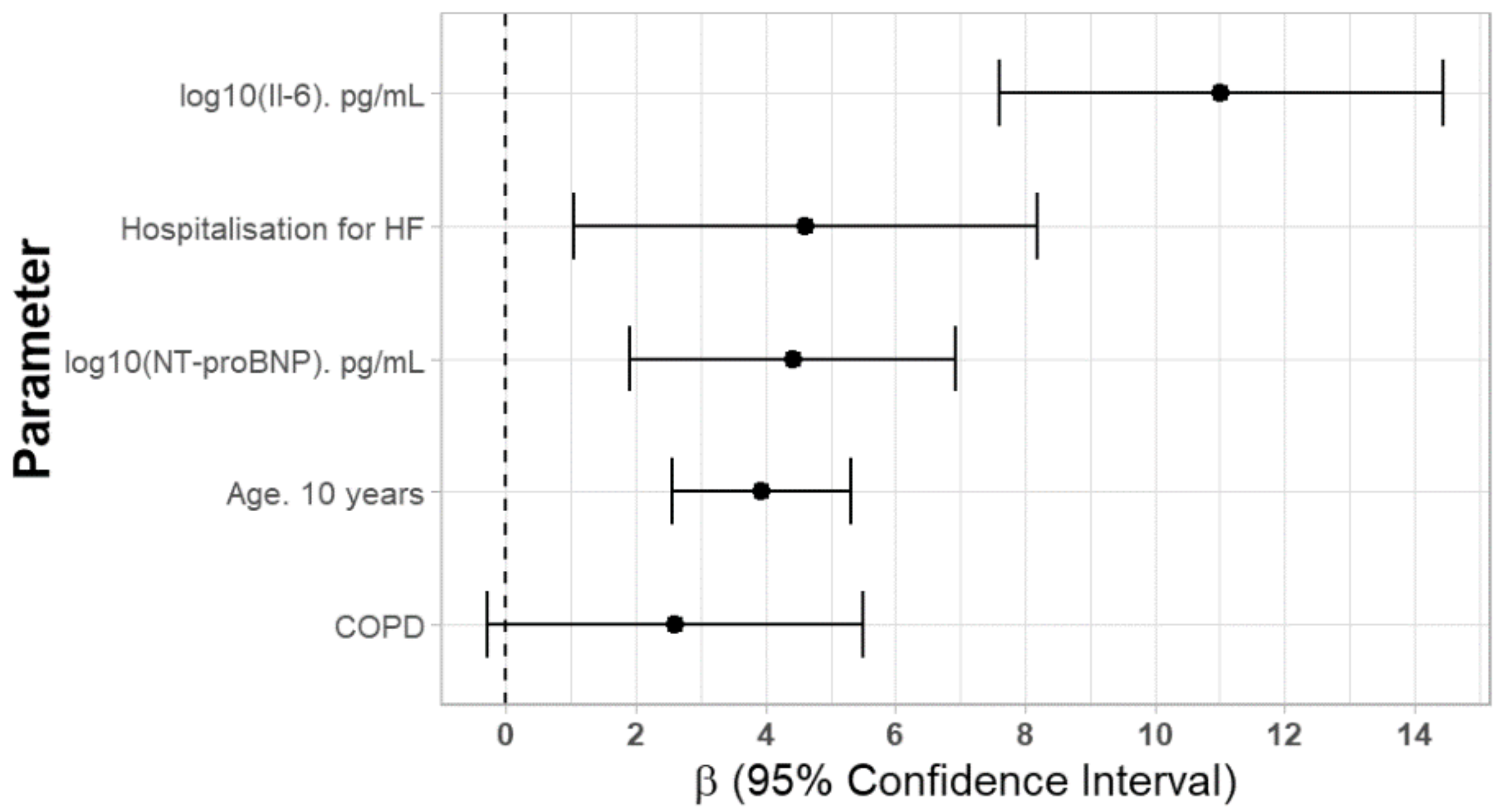