Malapposition is a common finding in stent and scaffold thrombosis (ScT). Evidence from studies with prospective follow-up, however, is scarce. We hypothesized that incidental observations of strut malapposition might be predictive of late ScT during subsequent follow-up. One hundred ninety-seven patients were enrolled in a multicentre registry with prospective follow-up. Optical coherence tomography (OCT), performed in an elective setting, was available in all at 353 (0–376) days after bioresorbable scaffold (BRS) implantation. Forty-four patients showed evidence of malapposition that was deemed not worthy of intervention. Malapposition was not associated with any clinical or procedural parameter except for a higher implantation pressure (p = 0.0008). OCT revealed that malapposition was associated with larger vessel size, less eccentricity (all p < 0.01), and a tendency for more uncovered struts (p = 0.06). Late or very late ScT was recorded in seven of these patients 293 (38–579) days after OCT. OCT-diagnosed malapposition was a predictor of late and very late scaffold thrombosis (p < 0.001) that was independent of the timing of diagnosis. We provide evidence that an incidental finding of malapposition—regardless of the timing of diagnosis of the malapposition—during an elective exam is a predictor of late and very late ScT. Our data provide a rationale to consider prolonged dual antiplatelet therapy if strut malapposition is observed. View Full-Text
Keywords: stent thrombosis; bioresorbable scaffold; optical coherence tomography stent thrombosis; bioresorbable scaffold; optical coherence tomography
►▼ Show Figures 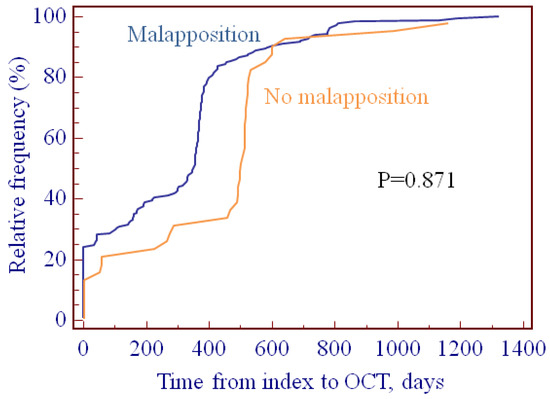