Increased Risk of Diabetes in Inflammatory Bowel Disease Patients: A Nationwide Population-Based Study in Korea
Next Article in Special Issue

Incidence and Impact of Acute Kidney Injury after Liver Transplantation: A Meta-Analysis
Previous Article in Journal

Why Have Detection, Understanding and Management of Kidney Hypoxic Injury Lagged behind Those for the Heart?

Acute kidney injury (AKI) is a syndrome with high incidence among the critically ill. Because the clinical variables and currently used biomarkers have failed to predict the individual susceptibility to AKI, candidate gene variants for the trait have been studied. Studies about genetic predisposition to AKI have been mainly underpowered and of moderate quality. We report the association study of 27 genetic variants in a cohort of Finnish critically ill patients, focusing on the replication of associations detected with variants in genes related to inflammation, cell survival, or circulation. In this prospective, observational Finnish Acute Kidney Injury (FINNAKI) study, 2647 patients without chronic kidney disease were genotyped. We defined AKI according to Kidney Disease: Improving Global Outcomes (KDIGO) criteria. We compared severe AKI (Stages 2 and 3, n = 625) to controls (Stage 0, n = 1582). For genotyping we used iPLEXTM Assay (Agena Bioscience). We performed the association analyses with PLINK software, using an additive genetic model in logistic regression. Despite the numerous, although contradictory, studies about association between polymorphisms rs1800629 in TNFA and rs1800896 in IL10 and AKI, we found no association (odds ratios 1.06 (95% CI 0.89–1.28, p = 0.51) and 0.92 (95% CI 0.80–1.05, p = 0.20), respectively). Adjusting for confounders did not change the results. To conclude, we could not confirm the associations reported in previous studies in a cohort of critically ill patients. View Full-Text
Keywords: acute kidney injury; genetic variation; human genetics acute kidney injury; genetic variation; human genetics
►▼ Show Figures 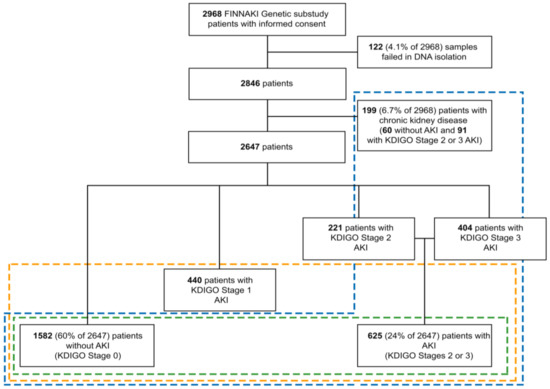