Rationale: There is a worldwide prevalence of generalized anxiety and major depressive disorders (MDD). Gut–brain axis dysfunction, antibacterial activity, and modulatory effects of antidepressants toward intestinal bacteria have been shown both in vitro and in vivo. Objectives: In this study, we aimed to investigate the effects of hospital stay, including escitalopram administration, on gut microbiota in patients with depressive episodes. Methods: After admission to the hospital and 7-days washout from all medications the composition of fecal microbiota samples was evaluated at baseline (W0) and after 6 weeks (W6), using 16S rRNA sequencing. The study was conducted on 17 inpatients (52.9% females), who followed the same daily hospital routine, including a standard diet and received 5–20 mg daily doses of escitalopram. Results: At the end of treatment (W6), no change was observed in the Chao1 index. However, Shannon (median (Q1–Q3): W0 2.78 (2.67–3.02) vs. W6 3.11 (2.80–3.30)), and inverse Simpson (median (Q1–Q3): W0 9.26 (7.26–13.76) vs. W6 12.13 (9.17–15.73)) indices increased significantly compared to baseline values (False Discovery Rate p (q) = 0.031 and q = 0.011, respectively). We also found that between-subject W0 Bray–Curtis dissimilarities were significantly higher than W0–W6 within-subject dissimilarities (median (Q1–Q3): 0.68 (0.56–0.77) vs. 0.38 (0.35–0.52), two sided Mann–Whitney test p < 0.00001. The within-subject dissimilarities did not depend on sex, age, BMI, illness duration and a daily dose of escitalopram. No significant differences between taxa levels, at the studied time points, were observed when adjusted for multiple hypotheses testing procedures. Conclusions: We conclude that a six-week treatment in a psychiatric hospital setting resulted in increased alpha biodiversity in fecal microbiota, however its causal relationship with patients’ mental health was not proved. We have also found that individual microbiome stability was not affected by hospitalization. View Full-Text
Keywords: microbiota; hospital stay; escitalopram; depression microbiota; hospital stay; escitalopram; depression
►▼ Show Figures 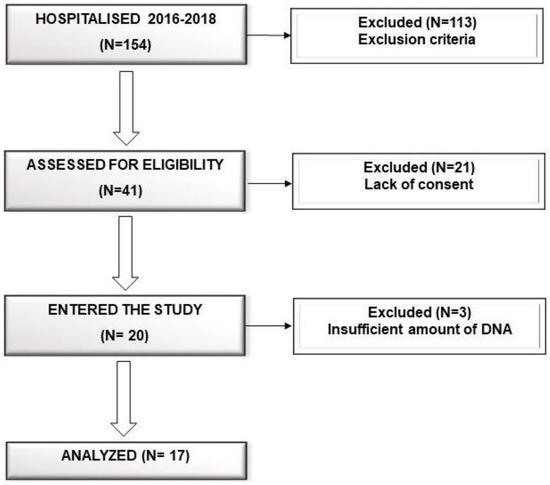