Metabolic Syndrome Including Glycated Hemoglobin A1c in Adults: Is It Time to Change?
Next Article in Special Issue

Bioengineered Skin Substitutes: The Role of Extracellular Matrix and Vascularization in the Healing of Deep Wounds

The Reeler Mouse: A Translational Model of Human Neurological Conditions, or Simply a Good Tool for Better Understanding Neurodevelopment?

The first description of the Reeler mutation in mouse dates to more than fifty years ago, and later, its causative gene (reln) was discovered in mouse, and its human orthologue (RELN) was demonstrated to be causative of lissencephaly 2 (LIS2) and about 20% of the cases of autosomal-dominant lateral temporal epilepsy (ADLTE). In both human and mice, the gene encodes for a glycoprotein referred to as reelin (Reln) that plays a primary function in neuronal migration during development and synaptic stabilization in adulthood. Besides LIS2 and ADLTE, RELN and/or other genes coding for the proteins of the Reln intracellular cascade have been associated substantially to other conditions such as spinocerebellar ataxia type 7 and 37, VLDLR-associated cerebellar hypoplasia, PAFAH1B1-associated lissencephaly, autism, and schizophrenia. According to their modalities of inheritances and with significant differences among each other, these neuropsychiatric disorders can be modeled in the homozygous (reln−/−) or heterozygous (reln+/−) Reeler mouse. The worth of these mice as translational models is discussed, with focus on their construct and face validity. Description of face validity, i.e., the resemblance of phenotypes between the two species, centers onto the histological, neurochemical, and functional observations in the cerebral cortex, hippocampus, and cerebellum of Reeler mice and their human counterparts. View Full-Text
Keywords: reelin; LIS2; ADLTE; autism; schizophrenia; translational models; GABAergic interneurons; dendritic spines; forebrain; cerebellum reelin; LIS2; ADLTE; autism; schizophrenia; translational models; GABAergic interneurons; dendritic spines; forebrain; cerebellum
►▼ Show Figures 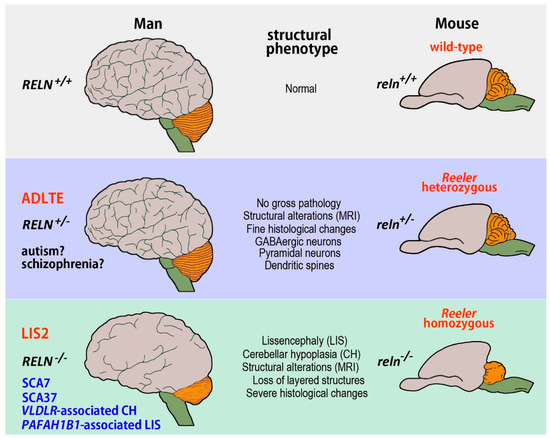